Litepanels®, part of Vitec Videocom, a Vitec Group company, will debut a variety of new LED lighting products at the NAB Convention and Exhibition in Las Vegas on April 16-19, 2012 in booth C6025.

The professional lighting pioneer is making big news with LED Fresnel fixtures by introducing a new member of its daylight balance Sola Series of Fresnels, along with the entirely new Inca Series of tungsten balanced Fresnels. 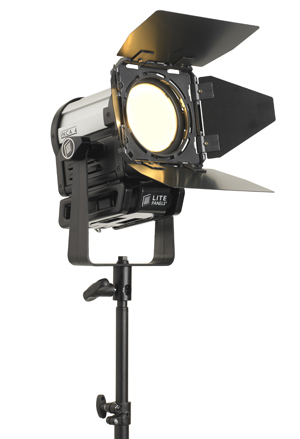 Daylight LED Fresnel Fixtures
The Sola 4™ daylight Fresnel fixture is the smallest DMX controllable LED Fresnel on the market. The new focusable fixture features a 4-inch (10cm) Fresnel lens and uses a small fraction of the power consumed by conventional fixtures. It employs Litepanels’ proprietary LEDs to produce the company’s hallmark soft light quality daylight color balance. The Sola 4 is based on the same breakthrough Fresnel technology as Litepanels’ award-winning Sola 6, but in a smaller, more lightweight form factor. It provides the controllability and light-shaping, single shadow properties inherent in a Fresnel light, with a range of focusing from 70 to 10 degrees. Like all Litepanels fixtures, Sola 4 can be dimmed from 100% to zero with no noticeable shift in color temperature. Both focus and dimming can be controlled manually with dials on the fixture, or remotely via DMX 512.

Litepanels’ breakthrough Sola 6™ Fresnel fixture has been upgraded over the past year and like the Sola 4, now sports an external power supply, and the same capability of being powered by DC via a standard XLR connection.

Tungsten-balance LED Fresnel Fixtures worldwide premiere
A new line of Litepanels tungsten-balance Fresnel fixtures, the Inca Series™, will make its worldwide premiere at NAB. The Inca 6™ and Inca 4™ mirror the capabilities of their daylight counterparts in the Sola Series of Fresnels, but will output tungsten-balance light that can be integrated with light from legacy tungsten fixtures. This now allows studios with existing tungsten fixtures to begin realizing the cost-saving benefits of LED lighting today without changing out their whole lighting installation.

Like the Sola series, new Inca Fresnel fixtures feature a lightweight form factor, 1/3rd that of traditional Fresnels. They provide the controllability and light-shaping, single shadow properties inherent in a Fresnel light, focusing from 70 to 10 degrees. Like all Litepanels fixtures, the Inca 4 and Inca 6 can be dimmed from 100% to zero with no noticeable shift in color temperature. Both focus and dimming can be controlled manually with dials on the fixture, or via remote DMX.

On-camera LED Fixtures
Litepanels will also unveil new on-camera LED lighting fixtures, the Croma™ (variable color-temperature) and Luma™ (daylight). The Croma can illuminate in any color temperature from daylight to tungsten via an on-fixture control knob, making it a versatile solution for run-and-gun news shooters, event videographers, and still photographers who move rapidly from one light environment to the next. The Luma provides powerful daylight illumination that is perfect for fill light when shooting outdoors or in similar color temperature conditions. Both the Croma and Luma are sleekly designed fixtures that can be dimmed from 100% to 0 via an on-fixture knob, with no noticeable shift in color balance. They draw just 9W of current, with comparable light output to that of a 40W (HMI) to 90W (tungsten) fixture. This miserly use of power provides long life from AA batteries, or both fixtures can also be powered off an AC adapter.

High Intensity LED Fixtures
Also making its NAB debut will be Litepanels’ Hilio high-intensity LED lighting fixture. The daylight-balanced Hilio is a small-footprint LED fixture capable of emitting daylight illumination over a 20′ to 25′ (6.1 – 7.6 M) distance, without requiring an external ballast. Early users of the Hilio compare the new Litepanels fixture favorably to the venerable HMI fixtures used by the television and motion picture industry, but without the HMI disadvantages such as heat generation, power hunger, short bulb life and required off down-time before restrike. The new high-intensity Hilio draws just 115W (while providing comparable illumination equivalent to a 575W HMI), and offers bulb life of 50,000 hours while operating from 100-240VAC 50/60 Hz, or 24VDC battery.

Live Event Area
The Vitec Group will host some of the most renowned figures in the broadcast and filmmaking industry in its dedicated Live Event Area at this year’s NAB 2012 on 16-19 April. The complete event itinerary can be found at www.vitecliveevent.com.

Litepanels was founded in 2001 by 5 professional gaffers and engineers who saw the future and pioneered LED (light emitting diode) lighting for motion pictures, television and the audio-visual industry. Their Emmy® award-winning technology has now been used on thousands of productions worldwide and is trusted by the world’s leading broadcast organizations.

Backed by the Vitec Group’s legacy of 100+ years in the broadcast and production industry, Litepanels continues to expand its suite of flicker free, color accurate, fully-dimmable soft lights that talent and Lighting Directors admire. These environmentally friendly fixtures practically pay for themselves with power savings and long life, setting a new standard in professional lighting. Along with other leading brands in the broadcast and professional videographer industry, Litepanels is part of Vitec Videocom, a Vitec Group company. For more information on Litepanels, visit www.litepanels.com