A first-hand experience with the newest monopod from Libec

Less than a few weeks after returning from Ghana 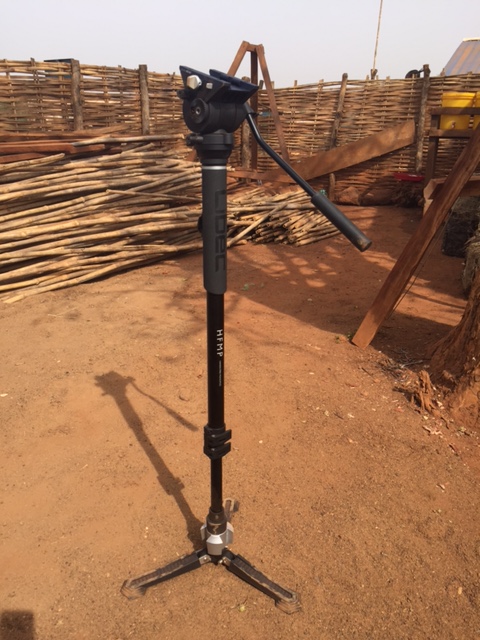 , my travels have taken me to South Sudan for a humanitarian project. Since this trip is for a specific job, I packed my trusty Sony FS7 and still brought along my Sony a6300 for B-roll. One thing I have rarely used on these types of jobs is the monopod. They’re great tools but I normally just bring my tried and true set of Sachtler Sticks to reduce my amount of luggage. Knowing that I was going to be doing a good amount of B-roll with a smaller camera, I figured I could bring a monopod along to see if I could speed up my shooting set-ups.

There are multiple brands of monopods on the market today that have small feet to help with stability, and I wanted to try one out because I knew I’d need to utilize that kind of stability. As luck would have it, Libec recently released the HFMP (hands free monopod) and their main selling point is this:

“A unique foot pedal with a smooth lock/release feature that allows the monopod to rest on its 3-leg locking base, creating a speedy and stable self-standing solution in the field while dramatically enhancing your mobility in all shooting environments.”

Given the work I do and the environments I’m operating in, that sounded like a product made for me. The folks at Libec were kind enough to supply me with one, even though I didn’t promise the monopod would make back to them since my plan was to chuck one into a duffel bag (gear has to be strong to survive my work) and take it on location with me to the South Sudan. Gear tends to break or get stolen while I’m working in these remote locations, but that’s all part of the charm of this work and products like the HFMP.

Here are some of the thoughts and feedback from myself and my co-operator, Tom Cosway, on this new monopod. 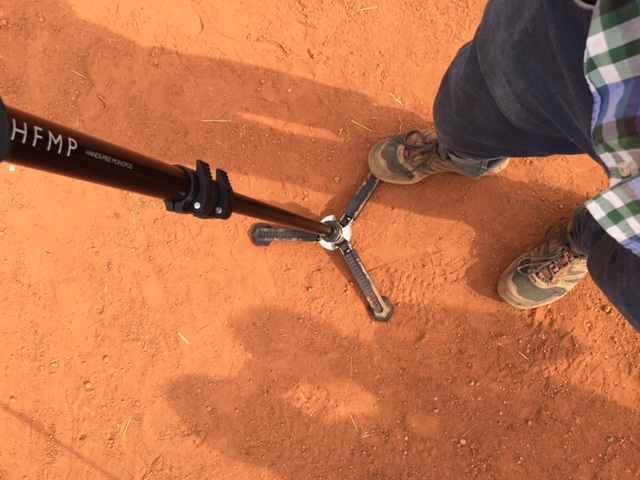 First off, the cool, unique feature on this monopod is the foot pedal that allows it to release the monopod to move around freely on three large rubber feet or lock it in place so it will balance on its own. And it is awesome. Simply step on the foot pedal and the body moves around like a traditional monopod. Hit the pedal again and the body locks in place and you can walk away from your camera balanced on this stick.

The pedal seems to be built out of a quality aluminum so it can handle some serious kicking. Additionally, the rubber feet look and feel like a large, durable door stopper. They are grippy and long enough that when you lock the camera and place a human foot on the tripod foot, you can feel confident and secure that it will not fall over. It would be great for interviews to simply lock it in place and stand left or right of camera to give eye line to your subjects and protect your gear. I actually do trust the monopod enough to walk away from it. #hardsurface #nowind #nochildren #insuredgear

As you extend the body of the monopod, the words of Archimedes “give me a lever long enough and I can move the world,” comes to mind. Since the main portion extends to five and a half feet, I wondered how they made sure that the operator or weight of a camera on top of one of the feet keeps from breaking the joint between the monopod and feet. So I stepped on one of the feet and started to push it to see how far it would go before breaking. That led us to discover that in addition to the feet being a flexible-ish rubber, it can also take a considerable amount of force but before you break it. The foot simply bends and then snaps back into place.

The other thing these three feet get you for video is what I call rotation vibration. I’ve had issues with monopods having a little rotational vibration as you hold them. Being that most cameras now have rolling shutter issues, this shows up in your image as little waves. Having the three feet insures that your monopod is not twisting from side to side.

Using the tool on location is where I began to see where it could have specific applications. We first mounted a Sony a6300 to the HFMP. The device stands well on its own, has a nice fluid head, and works great for swinging shots or slight movements using the feet. We tried dropping the monopod a few times and it didn’t seem to break, despite the fact all the nobs seem a to be made out of a light plastic. We were using the HFMP and Sony a6300 to get b-roll of new temporary housing units. We took it around as we walked through narrow paths, tons of people, and very dusty conditions. For this kind of environment, a tripod would have been less than ideal but the monopod worked well as a happy medium. It was very practical being able to lock the camera in place and walk away from it when we needed to head off somewhere. #insuredgear #justincase

We also found that the HFMP is great for a makeshift microphone or light stand. We simply placed our shotgun mic on it and set it up just off camera. Not much to say there beyond that it worked great, and did exactly what we needed. 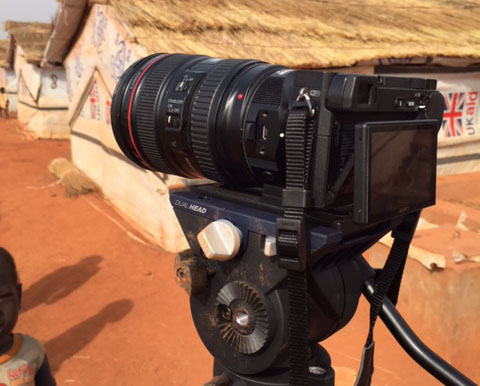 There are three main issues I have with the HFMP, although they’re rather specific to my type of work:

1. The weight isn’t ideal. I need to have a kit that’s small, light and fast, but the HFMP weighs a lot and we got tired quickly while carrying it. The two easiest ways to solve this would be to make it out of carbon fiber (though, it would increase the cost) and to make it a touch shorter. It goes up pretty high and I would sacrifice a bit of height for weight.

2. The collapsed length is still a bit too long. While climbing into the back of trucks, packed with people, I wished it had a 3rd stage, or didn’t go up as high. Although the height could come in handy, by adding an additional stage you could throw the HFMP into a backpack or carry it on days you just want to keep it simple.

3. The HFMP has a fluid head on top, but when you go to pan, the body of the monopod twists just above the foot release. That negates the need for the sweet panning fluid head and makes your pan a touch rough.

As I said though, these cons are specific to my needs, and the way in which I want to use a tool like a monopod. I have no doubt there are pros out there who want and need that extra height, so it’s just something you need to consider.

We tried mounting the FS7 to the HFMP. I will note the FS7 is above the manufactures suggested weight limit for the kit, and after nearly dropping the camera, I can see why. The three little feet are just not long enough to handle it and the head is not heavy enough for it. This is how we got in trouble. I went to pick up the FS7 up by the monopod and the camera began to tilt over, throwing the monopod and myself off balance. Thankfully, we caught it but the camera was upside down before we did.

That being said, using the FS7 on this monopod was probably my favorite part. We took it with us to do some golden hour shooting after an already long day of shooting and used it with the FS7 to take some of the pressure off my shoulders but keep the production moving fast to get as much work in as possible. With the proper handling of the monopod, it worked great. 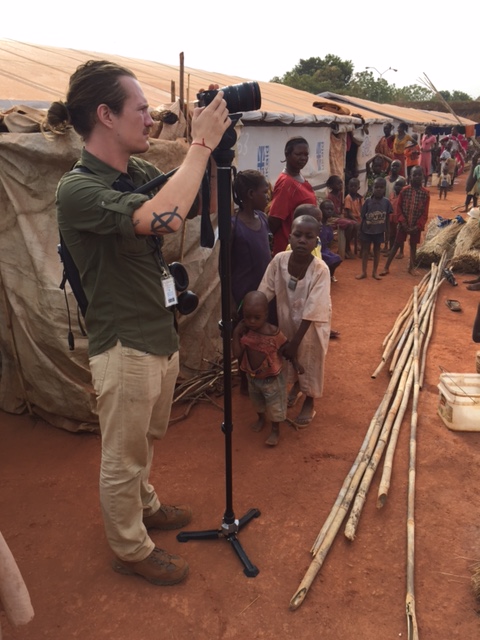 Overall, I could see this as a useful tool for any filmmaker. The practical applications would be great for people filming live events, conferences, news and weddings. It may be a bit big for tossing in a backpack for a light weekend of creative filmmaking or in the middle of Africa but overall, the HFMP is a revolutionary product for Libec.