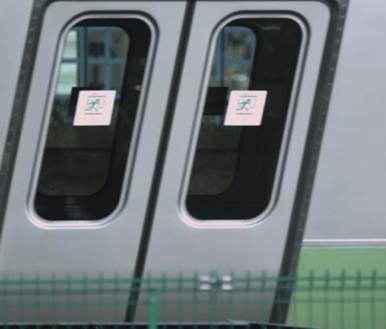 Stop that train! Right-to-left subject motion causes the train’s verticals to tilt, while the foreground fence is unaffected.

With much respect to the fine people at Kraft Foods, purveyors of Jello® brand gelatin desert, there is another Jello that we’re not fond of: the Jello-cam of some CMOS cameras. An artifact typically visible in moving subjects with strong vertical lines, Jello-cam can make uprights appear slanted and table legs look wobbly. A powerful Sony technology addresses this image distortion.

As we’ve said in this space before, Sony spent tens of millions of dollars originally developing our CCD technology for market. Over the decades, we spent millions more refining the CCD with successive generations of Interline Transfer, Hole Accumulated Diode (HAD) and microlens technologies. Now we’re moving on a broad front into CMOS image sensors.

Because contemporary CMOS sensors do so many things so well. CMOS has made tremendous strides in the core imaging characteristics of sensitivity, signal-to-noise ratio and dynamic range. And compared to CCDs, they’re more flexible in operation, easier to systematize, and lower in power consumption. Operating at lower power also enables CMOS to run cooler. Even if we could build a CCD to operate at the frame rates and pixel densities of some our CMOS sensors, the cameras would be too hot to hold! Despite these advantages, many CMOS cameras are still prone to Jello-cam.

Jello-cam is a distortion or artifact caused by CMOS rolling shutter, where the exposure timing of each row of pixels is slightly offset from the next. Row after row, these differences accumulate, triggering Jello-cam as vertical lines in moving subjects start to lean. A common torture test is to whip-pan a camera back and forth past a vertical subject. In extreme cases, this makes table legs look like rubber. Rolling shutter also incurs “flash banding” where a strobe light illuminates only a horizontal band across the frame.

All CMOS sensor manufacturers know that they can reduce Jello-cam and flash banding by speeding up image readout. The faster the readout, the less Jello-cam you’ll get. Sony in particular recognized that analog-to-digital conversion is a huge roadblock. Conventional sensors use only a handful of converters. This forces the analog voltage samples to line up like movie patrons at the box office, each waiting their turn.

Sony has a better way. Sony’s award-winning Exmor CMOS design uses “column-parallel A/D converters.” In this arrangement, if the sensor has 1920 x 1080 resolution, for example, there are 1920 columns and 1920 separate A/D converters. (We do some clever engineering to nestle hundreds of converters side-by-side in micron scale.) The result is less waiting, faster readout, and dramatically reduced servings of Jello.

With Sony’s Exmor CMOS design, Jello-cam is typically reduced to a subtle artifact that only reveals itself if you’re studying the image, picking it apart. But it all depends on your conditions of use. If you torture-test the camera, you can still reveal the Jello.

A Sony technology, soon to be introduced in high-end cameras, goes even further to address rolling shutter artifacts. Stay tuned for more information.