How does it perform on-set?

The light comes in an incredibly durable wheeled case. It only has one handle on the top, instead of one on each side like my Kino kit, so it’s a bit difficult to wrangle up into a truck especially with how heavy it is. The handle also doesn’t extend, so you’re kind of leaning back and kicking the case with your heels when you walk it around. It’s a small oversight, but annoying enough to mention.

The manual is super simple, only a couple pages, which is fine because the light itself is pretty self-explanatory with its labeled buttons and plain-English menu items. Some LED fixtures can have annoying on-body controls, but the back of the G160 can probably be figured out by someone with no real knowledge of lighting, just by poking around a bit. Another nice thing is that two of the control knobs have end-stops. One of the big things that bugged me about those Nanlite tubes I talked about in episode 1 of this series was that, due to the infinitely-rotating knobs, when you’d switch modes the knobs “home” would be reset, so if you were on (lets say) cyan, and wanted to adjust it a little bit, when you’d go to turn the knob it’d start back at red (both 0 and 255). You can just mark down which number you like for repeatability but still, that eats up time.

You can control the G160 with the back panel as I did, or Ledgo’s app, but as it’s billed as a studio light, you’ve got your good ol’ DMX ports on the back too.

The light is powered by a simple (what I’ve learned is called) Osha cable, which plugs into the power brick which neatly slots into the Vlock plate on the back. I really like that over the pack-in-bag situation on a lot of these new LED panels. As you can guess, the light is also able to be powered by standard Vlock cinema batteries, but you’ll need to buy one of these newfangled 26v ones as the traditional 14v kind you’ve used aren’t powerful enough.

In regards to the light itself, you’ve got granular control over the individual RGB channels, and you’ve got color temperatures from tungsten to daylight with tint adjust as well (which some lights don’t have!). I love the look of Tungsten mixed with Green or Magenta, depending on the scene, so that was nice to see. When set to 2700K and 7500K zeroed out, the light seemed to be pretty accurate, but even so you could just tint out the bias I’d assume. I’m still waiting on a color meter. Sekonic? Help?

The Ledgo has some “lighting effects”, including Tungsten (separate from the WB mode), but it also has Halide, Fluorescent, “Street”, and Sodium Vapor! I love sodium vapor lights, and hate that LA is all daylight-balanced LEDs.

Anyway, the G160 also has some filters built in, but I couldn’t tell you what they are. At first they’re numbered like Lee filters and seem to match as such, but then the numbers don’t mean anything and they all kind of look the same. 202, 203, 204, 208, those all seem to match, and then the other 6 filters are kind of similar. The manual doesn’t say what they are, so who knows.

SO! With all that out of the way, how did it perform? I took the light on two gigs, one photoshoot and one music video, and I’ve gotta say I was pretty happy with this thing. 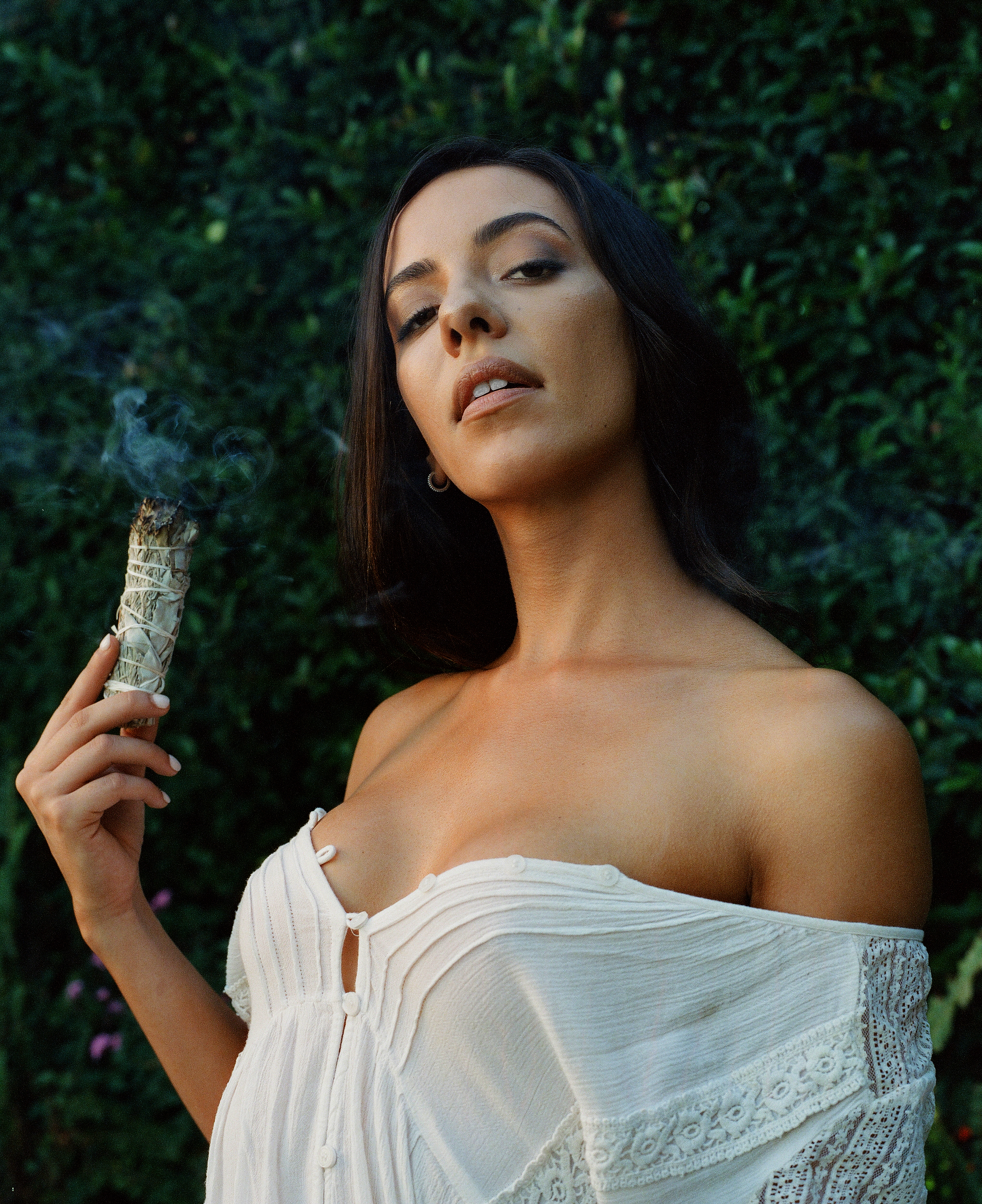 I was shooting medium format film for the photo shoot (Cinestill 800T in the case of this image), so I was interested to see how the film would respond to the artificial source. We shot a few frames with it set to a pinkish purple color, and that seemed to give our model a lighter, even contrast on her skin whereas the digital photos seemed to show greater saturation.

Our model Charli Burnett was constantly in shade, so we were using a big reflector a lot, but at one point we brought in the 160 to act as a key and it really surprised us. We set it to a low tungsten and that gave us a really nice golden hour kind of look that looked great on film. Normally I’d have to bring the light way in to get enough light on the subject but we actually were able to keep it at a reasonable distance for wider shots. After some bro-science I think I figured out that this thing is about as bright as a 1K.

For the music video with Alexa Van, we found a great location that did a lot of the heavy lifting for us in regards to light and production design but the Ledgo was our sole key light and it did great. We shot two scenes in Club Tee Gee, one on either side of the bar, and it was really easy to dial in the color by eye to match the room. This video is kind of a hyper-real situation (you’ll see when it comes out) so the aggressive coloring was just fine. Tee Gee’s house lighting is actually really deep yellow anyway so it worked out great. For the performance parts, we also had the help of the Astera Titan tubes, set up simply around the band for a bit of interest, but wouldn’t you know it, I set them to fire mode! It’s a rock video with some darker vibes, it’s exaggerated, and we had a disco ball giving us these moving dots all over the place so the shifting orange/red colors surrounding everyone, so coupled with the Ledgo pinned to full-red backed by the bar’s yellow lighting off to the side, it looked like we planned it that way. I had about an 80% plan, leaving 20% up to “the muse” as Steven Pressfield would say, so there ya go: I used fire mode for a real gig. Never say never.

We shot the video on the Pocket 6K with Atlas Anamorphics, if you’re interested, and with the camera set to its second native ISO of 3200 we were able to really leverage the existing light. Really happy with how that came out.

For the other scene, I just plopped the panel in the corner and aimed it at whoever the camera was covering at that moment as it was supposed to look less stylized. It’s not really motivated by anything but it looks natural enough. I also had a single Titan tube off to the other side of the room set to full Red just as a nod to the other scene as well as to act as a bit of fill

Overall the Ledgo G160 performed admirably, and could likely be used in place of one of the more expensive, similar-form factor LED panels. I would love to get a couple of them in a room and do some definitive side-by-side tests. Perhaps that’s one for the future. Once I get a colormeter.