Adobe has started to “reveal” information about its next generation of pro video tools, and yesterday we wrote an overview of some of the more significant new features being slated for a future version of After Effects. But if you’re hungry for more information, and sooner rather than later, then you may be interested in some more in-depth videos we’ve recorded, plus a pair of sessions Chris is presenting at next week’s NAB show. 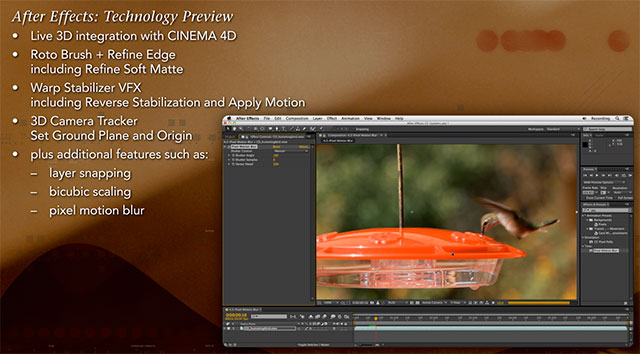 (For those who are curious about After Effects/Cinema 4D Integration, a few years ago we created a separate course on the subject; the concepts are the same, except in the future it you won’t need to do the intermediate rendering step for most of the functionality discussed.)

If you don’t already have a lynda.com subscription, you can go to www.lynda.com/go/chrisandtrish to get a free ten-day all-access pass to all of their training, including all 40+ of our courses. They will ask you to go through the motions of registering, including giving them your credit card info, but if you cancel within seven days you won’t be charged. (But really – we think you’ll find it’s worth having a regular subscription; among other things, we have a few new courses on tap for later this year.)

Also, if you will be attending NAB, two of the sessions Chris will be giving at Post|Production World (requires its own registration and fee) will demonstrate the new features, with special guests who will take you on a deep dive into the possibilities:

Both sessions of the above sessions are tentatively scheduled to be in room N254. Chris will also be giving a session Tuesday 3:30-4:45 PM on Editing and Animating to Music, and immediately afterward will be hosting a Hot Panel with Eran Stern and Ian Robinson on the Art of Motion Graphics. We hope to see you there!