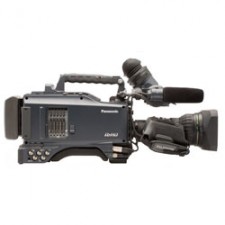 SECAUCUS, NJ (July 9, 2008) – It is a dark and claustrophobic night for the heroine of the upcoming horror movie, Laid to Rest, the terrifying story of a young girl who wakes up in a casket with a traumatic head injury and no memory of her identity. This second directorial effort from renowned special effects artist Robert Hall (Superbad, Buffy the Vampire Slayer, the upcoming Pineapple Express) was shot entirely with Panasonic AJ-HPX3000 native 1080p one-piece P2 HD camcorders. Anchor Bay Entertainment, a division of Starz Media, has picked up the film for release in February 2009, and will premiere the Laid to Rest trailer at Comic Con in San Diego later this month.

Lena Headey, recently seen in the title role of Terminator: The Sarah Connor Chronicles, stars in the film, as does Bobbi Sue Luther (Killer Pad) as The Girl (who after she awakes quickly realizes she was abducted by a deranged serial murderer, and must survive the night and outsmart the killer who is intent on finishing her off). The Director of Photography is Scott Winig.

Hall was introduced to P2 HD cameras when he shot a music video with the AG-HVX200 handheld. “I loved the tapeless workflow, and when Laid to Rest was in the planning stages I knew I wanted to avoid the lab, telecine and transfer costs of my first feature (the critically acclaimed Lightning Bug, shot on 16mm),” the director said.

His research led him to the HPX3000, which he chose based on the AVC-Intra codec and its full-raster cinema-quality images as well as the solid-state workflow. The production rented two HPX3000s and an AJ-HPM110 P2 Mobile recorder/player from Panavision (Hollywood, CA); the cameras were outfitted with Panavision Primo digital zoom lenses.

“The P2 format is literally a filmmaker’s dream,” Hall said. “Having the flexibility to edit a scene that you shot two hours ago right in the field is amazing, and has made making post-production move along much more quickly. Most importantly, the footage is stunning.”

The production entailed a 24-day shoot on location in Maryland in April of this year. “We shot almost exclusively at night, most exteriors,” he said. “The weather was cold and rainy, and I was impressed with the HPX3000’s flexibility in the face of weather extremes. It performed perfectly.”

Hall and DP Winig had not worked together prior to the Laid to Rest shoot, but met through a mutual colleague, director Max Nichols. Earlier this year Winig shot a music video with Nichols for the British metalcore band, Bullet for My Valentine; the four-minute video, currently airing in the U.K., was a multi-cam HVX200 shoot.

“That was a demanding assignment, on the road with band covering 12 cities in as many nights,” Winig said. “The material looks fantastic, and HVX200s came through again and again in mixed lighting situations.”

“By the time I met Rob he had more or less opted for HPX3000, but given my experience with the HVX200 and my familiarity with Panasonic’s VariCam (which shares some advanced gamma settings with the HPX3000), I felt confident with the choice,” the DP noted.

“We had only one day for camera tests, when Rob and I essentially arrived at an aesthetic for the movie,” Winig said. “Cathy Peirce of Panavision gave us tremendous support with the cameras. Ultimately I took a relatively simplistic approach, in that I didn’t mess with the cameras’ color matrix but relied on my ability to fine-tune lighting and control the contrast and highlights.”

“Every sequence was lit, and even ungraded the image quality and color reproduction are gorgeous,” he continued. “The pictures are razor sharp (a look the director wanted), and the contrast is wonderful. We went for the most pristine look with no filtration, shooting at -3dB for maximum flexibility on the back end.”

Laid to Rest was shot in AVC-Intra 100 at 1080p. Winig operated the A camera, with camera operator Laurence Avenet-Bradley on the second HPX3000. While the shooting style was largely run-and-gun, the cameras were positioned on dollies, sticks, baby sticks, cranes and Technocranes as well as used handheld. Zeiss Digi Primes were utilized for very wide-angle shots.

“I rated the camera at ASA 250 with adjustment for -3db, which essentially brought us down to an ASA of 200, matching up nicely with one of my favorite, much used Kodak stocks, the 5217 200T,” the DP said, “Everything was very consistent, with the highlights holding really well with nice latitude. I’d tweak the backlights to accommodate a lot of backlit smoke, and the result was a sexy, moody look that fit the aesthetic perfectly.”

“I tried not to watch dailies, but instead relied on my own monitor, a Panasonic BT-LH1700W LCD, to know what I had,” the DP said. “I calibrated the cameras’ on-board LCD flip-out monitors with my 17”.

The filmmakers were equipped with up to a dozen 16GB P2 cards on location. Hall would review video in the AJ-HPM110 P2 Mobile recorder (with six P2 card slots), and had two MacBooks Pro laptops loaded with Final Cut Pro Studio 2 to begin the editing process on location.

“We could shoot an elaborate scene early, and within a few hours have a timeline-cut sequence,” Hall said. “We left Maryland with an entire cut of the movie in 1080p.”

Hall is currently working on a director’s cut of Laid to Rest. The movie will be color-corrected in a da Vinci system and output to film.

“The HPX3000 was the best camera for this project, and it performed flawlessly,” said DP Winig. “We had the cameras in the rain, on cranes, we were running around hand-held-we really pushed them to the limit.”

“The HPX3000 was a perfect fit for us aesthetically and financially,” Hall added. “The amount of coverage we got was unbelievable, and the overall look is beautiful.”

With Unreal Engine’s support for DMX, professionals in live events, broadcast, and more are empowered to use real-time rendering...