#15 Sound for a modern film musical

La La Land, this year’s big Oscar nominee, is the first feature film to have a female sound editing team nominated. Millie Iatrou and Ai-Ling Lee, were co-supervising sound editors on the film. Ai-Ling was also tasked with sound design and shared mixing duties with legendary re-recording mixer Andy Nelson (2 Oscar wins among his 21 nominations). I spoke with Millie and Ai-Ling about their work on the film.

La La Land is the 5th or 6th collaboration between the women. They first supervised together on Cameron Crowe’s film, “We Bought a Zoo” and found a great working relationship immediately. Millie says of Ai-Ling, “I love her work, I love her personality. We have a similar work ethic and aesthetic so it was just a good working relationship. We’re always aware of what the other person is doing and what challenges they’re facing, and we’ll play things for one another. I’ll have her give me notes and I’ll give her notes, it’s very collaborative.” Ai-Ling continues, “The way that we work as a team is that she is more involved in dialog and the ADR side, where for me I am more in charge of design, sound effects and Foley. I think that we work well together and when we work on something we review it with each other and get each other’s opinions. I think it’s a good partnership.”

Reaching the level of filmmaking expertise that these women have, takes a lot of hard work, determination, networking and plain old, roll up your sleeves talent. Regarding women working in post sound, Ai-Ling says, “It is rare sometimes, especially in effects, to be working with other women in the crew. It’s mostly a male dominated field. Historically it has been that way.” In regards to her gender Ai-Ling continues, “I did not see my gender playing a role in anything. I’m sure it is true for everyone that you have to work really hard and prove yourself a lot, to gain the trust of people, to give you the opportunity to have more responsibility and more creative say. Regardless of gender.”

Early on they forged a dynamic relationship with Damien Chazelle, the director of the film. Proximity was an essential asset to post production as Ai-Ling explains, “My cutting room was actually in the same location with Damien and the picture editors who were cutting the picture. I was just across the hall from them. Justin Hurwitz, the composer, was next door to the cutting room so we were all really close to each other.” 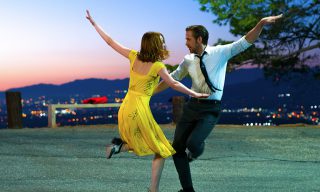 A key aspect for Damien was that the song portions of the film blend seamlessly to the dialog scenes. Millie discusses his approach to the sound, “In general, my direction was to make it sound as natural and real as possible. He wanted a very realistic, naturalistic sound for the film.” Ai-Ling continues, “He wanted things to sound grounded, he wanted a soundscape that can transition seamlessly between the realistic sounds of LA and the musical numbers. He didn’t want it to be where you have the spoken dialog scene and then when they start singing it sounds like a prerecorded song that they are singing to. So with that, I had to pair a bunch of interesting little bits, musical background sounds, and a lot of Foley. Then, through the mix, gradually the soundscape just melts away as the musical numbers come in.”

Damien was always decisive with his choices, which made for a fruitful collaboration. Millie, who was mainly in charge of the dialog elements said, “He has this incredible attention to detail to everything. He wanted us to run everything by him, which I like to do. If I needed some people in the background saying certain lines, or whispering or whatever, I would put together some choices and he would always have a really strong opinion.” 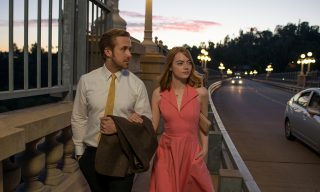 Ai-ling also talks about Damien’s very specific requirements for the audio backgrounds and city sounds, “He wants the idea that the city is like another character in the film, the sounds of the city are always bustling although La La land is a musical. You always hear music coming out of different places too. Like music coming out of a car going by, or music coming out of a neighbor’s apartment. When Sebastian first opens his apartment, he opens the door and then you hear a Mariachi song playing down the hallway, he wants it peppered with stuff like that.“

Being a very unique sort of feature film, a musical, required tight integration with the composer each step of the way. Millie sheds some light on that here, “The way Justin Hurwitz did that with all those numbers, including like when she [Mia] sings her audition song, is he was playing the piano to the actors, which they could hear in their ear in an earbud. So they had live accompaniment to the singing, so they were able to sing and he would follow them with the piano, so it was more like a live performance. Whenever you see him [Ryan Gosling] playing the piano, he’s [Justin] always playing the piano. Those are always his [Gosling’s] hands, but the actual music that he’s playing is coming from Justin.” Ryan Gosling worked long and hard on mastering the virtuoso fingering patterns for the songs. 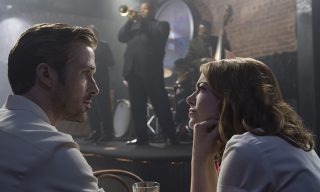 Veteran location mixer, Steven Morrow, did a masterful job on set to help achieve Damien’s main audio goal of seamless transitioning from dialog to song. As Millie discusses, “There were three key scenes that were recorded live on set, and Steve Morrow who is the production mixer, did a really great job capturing all of the sound on set. He put mics on them, even if there was playback, he still put a mic on them so there was always something I could grab. Sometimes, like the Roommate’s song for example, when Emma sings her line, that’s what she sung on the day on the set. And also in that song, the roommates had these exclamations, like some gasps or little shrieks, and we were able to use those. It was really useful and it helped make it feel more real than a pure musical number would normally feel.”

The dazzling opening scene was a serious challenge for the audio department. Being an LA freeway exterior, the majority of the sound was created in post. Here again, Damien was quite clear about each aspect of the sound that he required. Millie recorded various spoken bits for the car radios that were then mixed by Ai-Ling, and Ai-Ling, under instruction from Damien, created a very Los Angeles centric soundscape for the freeway, needed to firmly establish the location.

Millie discusses her work on the opening sequence, “Damian gave us the instructions that he wanted to hear the traffic jam first. So he told us that he wanted to hear a radio announcer announcing that it’s another sunny day in Los Angeles, starting with the 1812 Overture, and then you hear a radio being tuned, and then you hear the weather report, then it goes on to other things.” In collaborating on this opening sequence with Ai-Ling, Millie adds, “She actually built that whole thing, she put it all together, that builds into this chaos, this cacophony of radios and music, which then plays into this musical number.”

Always recording, Steve, the location mixer, offered some key recordings to the open scene as Millie describes, ”… once again Steve Morrow recorded what was happening on set, so I was able to grab the little screams, like when they open up the truck and you see the band and the people dancing and encouraging each other. We spent a lot of time on that whole sequence.”

Ai-Ling continues the discussion on the opening scene, “I was tasked with building the soundscape, starting with a little bit of horns here and there, and then the number of horns grow in amount. Then we added cars idling, and car radios coming in – basically the soundscape needed to introduce the audience to the movie, through a traffic jam in Los Angeles. The city sounds, together with the radios, needed to build to a cacophony of sound. Jason Hurwitz gave me a folder of many, different, eclectic styles of music. Damian wanted it to be a diverse kind of music choices for Los Angeles, choices for the different cars being in Los Angeles. It was a lot of fun and a lot of back and forth, and it took a while to mix it too.” I bet, with all of the background sounds, car horns, car radios, Foley sounds, voices and music! 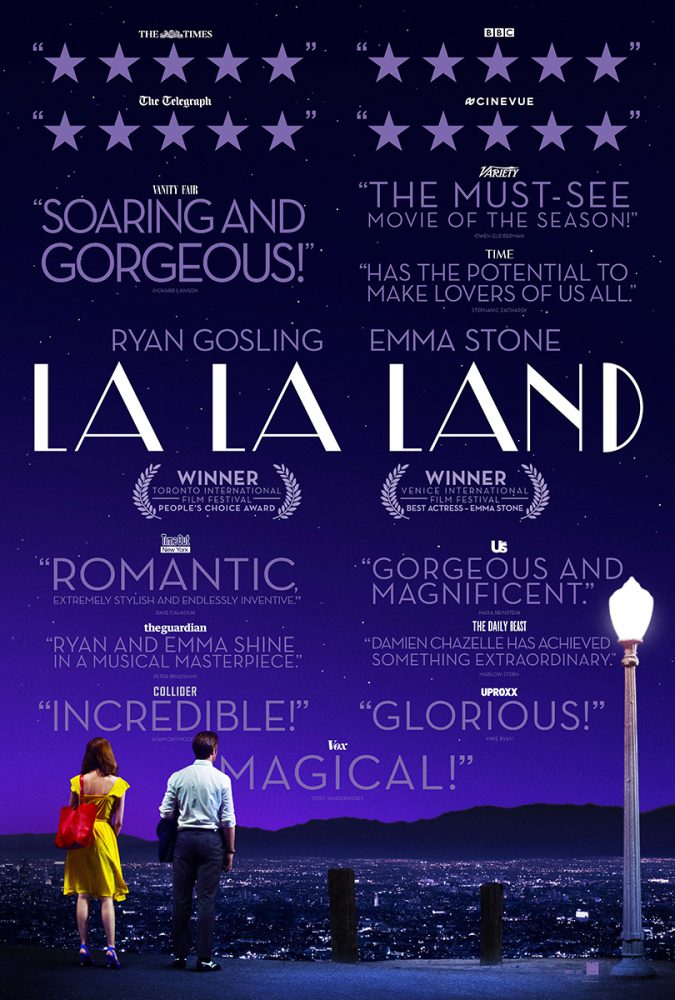 Damien’s attention to detail came down to choosing the style of shoes and surfaces for the recreated dance recordings in the Foley process. As Ai-Ling explains, “He brought in Mandy Moore, the choreographer, and Mandy improvised on a mixture of textures, and together with Damien I cut everything in rhythm to the music. Then, during the mix, Damian was very specific about which steps he wanted to punctuate, or focus on, like certain scrapes, because it maybe plays better with the music. Then we had Mandy Moore come on during the final mix stage, to get her final notes, and to get her seal of approval that it looked and sounded like they are actually dancing from a dancer’s point of view.”

Millie offers these thoughts on working on the film, “This was a really exceptional experience, because all of us who worked on the movie, I’m speaking for my sound crew, we immediately fell in the love with the movie and just wanted to give it our all. It just seemed that we all had a personal relationship with the movie. Maybe it’s because it’s about people who come to Hollywood and have a dream and try to achieve it. I’m not sure what the reason is, but everybody on the film had this incredible, personal connection which made this a wonderful experience for all of us.”

Great films require this level of detail and hard work, the 14 Academy Award nominations are a confirmation and a testament to that fact. La La Land is a magical film experience, buoyed by the invisible artistry of Millie and Ai-Ling’s expansive sound expertise and talents.