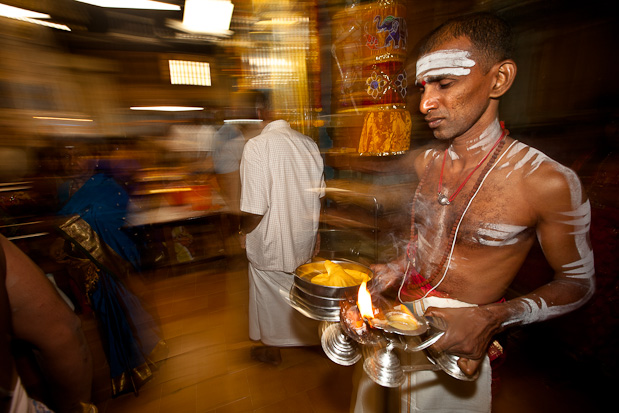 It’s not every day you are able to attend a strange ritualistic ceremony like the Hindu celebration of Thaipusam, which happens mainly in Singapore and Malaysia. Hindus celebrate the god Muruga vanquishing his enemies with a spear or “vel.” They do this by walking in a long procession that ends at a special Hindu Temple. Along the way devotees carry large containers of milk on their heads or small ones attached to their bodies with wire pierced through their skin. They also take needles and sometimes even large rods and stick them through their cheeks or tongues. It’s a graphic celebration that is visually compelling.

As a photographer covering this event, I had to ask myself what would be the best way to cover this and have my images communicate what I was seeing. There is noise, constant movement and of course an abundance of color. It’s also a very crowded environment with not much room to move. So I decided to carry two cameras with two different lenses. My first, and primary lens was my 16-35mm f/2.8 and the other was my 85 mm f/1.2. Both of these lenses were mounted onto 5D Mk II bodies.

There are several ways to capture or create movement in a photograph. Of course movement is all about time. A slow shutter speed creates movement blur and gives the viewer a sense of that movement. But the problem with a slow shutter speed is not only do you get movement of your subject but you also get camera movement. To compensate for camera movement, you can use a handy technique called “dragging the shutter”.

Dragging the shutter can be done in two forms. First curtain sync and second curtain sync. Each gives a very different effect. The basic concept goes like this. By using a slow shutter speed you create movement within the frame and allow the ambient light (not the flash) to expose the image. While the shutter is open, a flash pulse fires and freezes the subject.

Depending which curtain the flash synchronizes with will determine if the motion blur is in front of your subject or behind your subject. Figure 1 shows a first curtain sync and you can see how, when the ball is moving from left to right, the blur is in front of the ball, giving an unnatural feel to the movement. Figure 2 shows the opposite. In a second curtain release, the shutter is opened and light is exposing the image. Any movement is being recorded as a blur. But, just before the second shutter curtain closes, the flash fires and freezes the subject. What you end up with is motion blur with a sharp image frozen at the end, giving a natural feel of movement, much like you would see in a panned image but with the subject crystal clear. 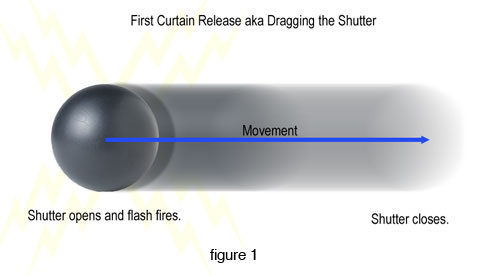 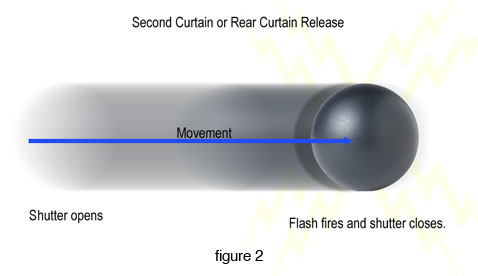 It is best to used E-TTL metering through your flash for the correct flash exposure. But take several test shots and see if you need to use some flash exposure compensation I think I used -1 or -2 on several shots. I just left my flash on-camera and used a small diffuser over the light. Also shoot in shutter priority. As in panning, you want to keep control over your shutter speed and your aperture is not that critical in this type of shooting.

Check out the images below and you can see how effective this method can be. All of these were shot using my 16-35mm and second curtain sync. 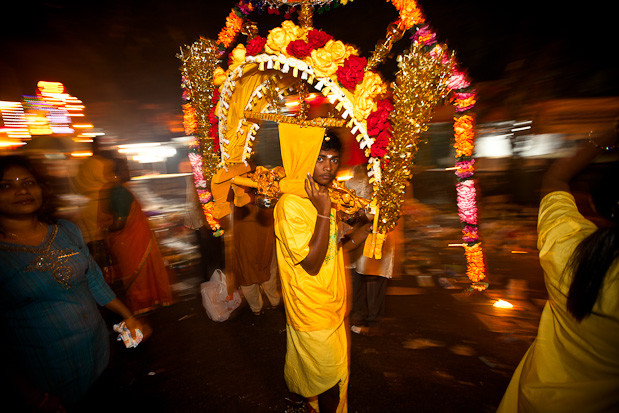 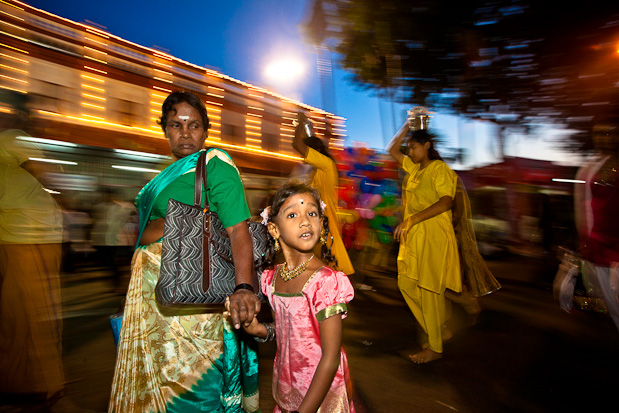 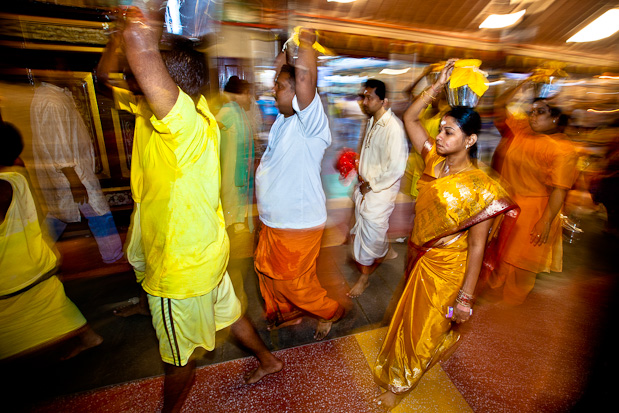 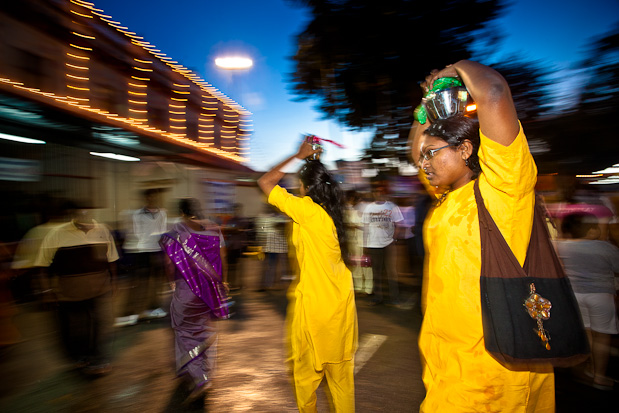 By the way, if you want to see more images from my Thaipusam shoot you can find them HERE.