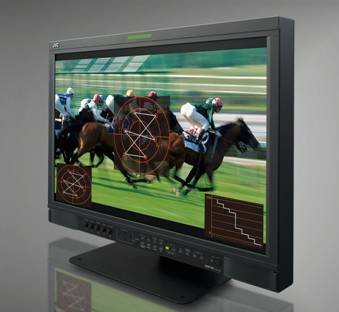 “JVC’s LCD monitors are the leading broadcast monitors in the U.S. market, which is a result of providing unmatched performance and value without compromise,” said Craig Yanagi, manager of marketing and brand strategy. “The new feature-rich V©rit© G Series is designed to establish an even higher standard for critical monitoring applications while keeping well within your budget.”

Both models are equipped with traditional rotary knobs for sound and picture control, plus a built-in speaker and a rugged, adjustable stand. The DT-V17G1Z also provides AC/DC operation and a handle for field use. G Series monitors feature an HDMI-compatible DVI-D input for Blu-ray playback, plus component and composite inputs to accommodate legacy equipment.

ABOUT JVC U.S.A.
Headquartered in Wayne, New Jersey, JVC U.S.A. is a division of JVC Americas Corp., a wholly-owned subsidiary of Victor Company of Japan Ltd. JVC distributes a complete line of video and audio equipment for the consumer and professional markets. For further product information, visit JVC’s Web site at http://pro.jvc.com or call (800)582-5825.