Jeremy Collins gives new meaning to the term “hybrid profession.” He’s a successful artist and filmmaker. He’s also a professional athlete and expert rock climber who has ascended some of the world’s most remote rock walls. His beguiling hand-drawn illustrations and his daring climbs are inextricable: the stuff of his expeditions—maps, mountains, nature, and courage—is the stuff of his art.

Jeremy Collins gives new meaning to the term “hybrid profession.” He’s a successful artist and filmmaker. He’s also a professional athlete and expert rock climber who has ascended some of the world’s most remote rock walls. His beguiling hand-drawn illustrations and his daring climbs are inextricable: the stuff of his expeditions—maps, mountains, nature, and courage—is the stuff of his art.

Collins uses Adobe Creative Cloud to translate his artwork for multiple uses, from magazine covers and outdoor retail catalogs; to his short films and Meridian Line brand of lifestyle gear. His latest film, Drawn, combines documentary and animation in a globe-spanning story. In all his efforts, Collins strives to inspire people to do good things for the environment and for one another.

Collins will be in the Seattle area on April 20, 2015 for a live performance, film, and book signing at the Neptune theater. Tickets are available through STG in Seattle.

Adobe: How did you get started on this combination of art, filmmaking, and rock-climbing?

Collins: People often ask how long I’ve been an artist. Like anyone else, I started with crayons. I just kept going with it. As I fell in love with mountains and rock climbing, I was able to understand myself more clearly as an artist and became the climber that I am. 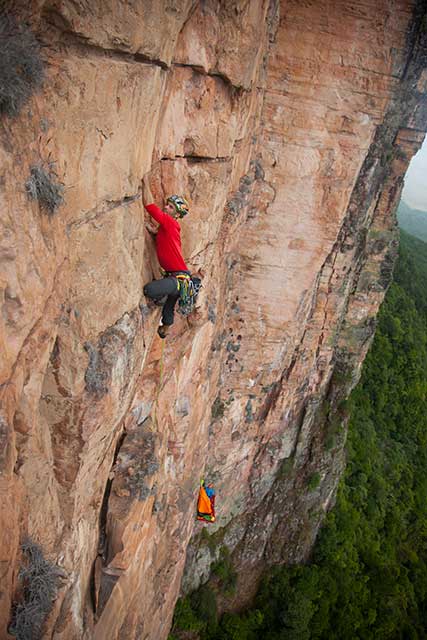 Rock climbing is a tactile, physical experience. My approach has one foot in the modern world, and the other in the historic. It’s similar with my art. I like old school techniques: pen, paper, and watercolor. For a long time, I alternated between loving and hating technology. After I found filmmaking, there was more love than hate. With film I have control over the music, timeline, and story. I can move seamlessly from the real experience of climbing—cold, hot, tired, happy—to the 2D world of drawing and paper. Then I translate that 2D world to film, and use Adobe Creative Cloud to tell stories.

Adobe: What inspires those stories?

Collins: There’s a saying that adventure is when everything goes wrong. I think adventure is when you leave your comfort zone. That’s where I find inspiration: putting yourself on the line, traveling to other countries, and hearing other people’s stories. The reality of being out of your comfort zone forces you to create something new, and to find what is true and worth telling. 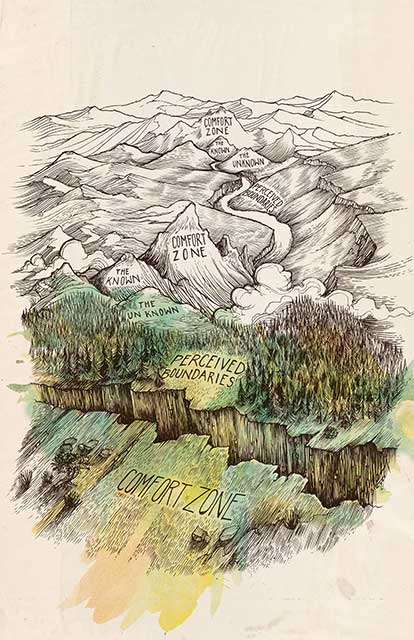 Adobe: Tell us about the genesis of Drawn.

Collins: I was in basecamp in Patagonia waiting for Mt. Fitzroy to thaw out so I could climb a route that was first climbed in the 1960s. I realized I’d wasted a month of my life waiting to do something that had already been done. I looked at a map and remembered all the places I someday wanted to visit, including Greece, South Africa, Pakistan, the Baltoro Glacier. I decided to just go north, south, east, and west, to find something physically demanding and creatively satisfying.

The journeys then came together organically over the next five years. I didn’t really understand the story until I started writing the script, a year after the traveling ended. Then I saw that all four trips were essentially one story of sacrifice, vision, friendship, and loss.

Adobe: What cameras did you use?

Collins: We used Canon EOS 5Ds and GoPros. I kept it as lo-fi and first-person as possible. Hand-held, no drones, no boom mics. Drawn is about friends climbing undiscovered walls together, immersing ourselves in culture and filming as we go along. 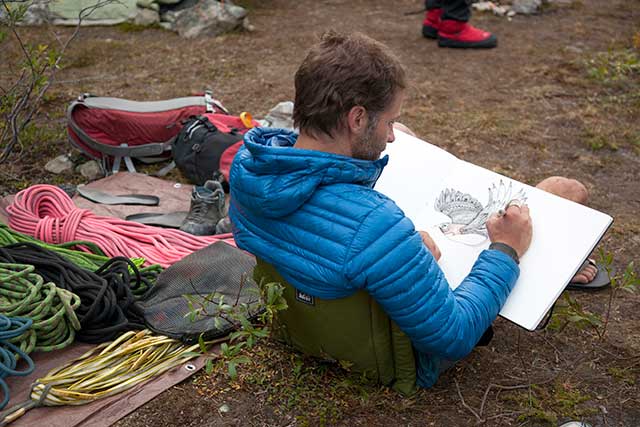 Adobe: What Adobe solutions were used to assemble the film?

Collins: After five years of working with Final Cut Pro and speaking with my peers, I knew it was time to move to Premiere Pro. The switch made my workflow much smoother; everything was more intuitive. I storyboarded the animation scenes by hand, then brought them into Photoshop and then InDesign. We used both After Effects and Premiere Pro to do color correction and image stabilization.

Adobe: How have you used Photoshop over the years?

Collins: I resisted digital tools for a long time, but around 1997 I learned how to use a Wacom tablet and I haven’t used a mouse since. I found that working in Photoshop was not a crutch but a tool that helped me amplify my storytelling and my art. Now I can’t imagine not using it. My entire workflow relies on Photoshop.

In high school and college I made a living doing caricature portraits, like a street busker. After embracing this tablet technology paired with Photoshop, I could differentiate myself at events where I was doing caricatures as a “street artist.” I’d bring my laptop, Photoshop, projector and Wacom tablet and project live as I drew. It was both art and entertainment.

Adobe: Tell us about your route maps.

Collins: The maps started as simple sketches of my road trips, and I built a library that I showed to my commercial clients. Alpinist magazine gave me a platform in every issue, then National Geographic hired me to do a simple hand-drawn map for a cover, and they were adamant that I bring my personal decorative style to the work. It was an amazing opportunity. Since then I’ve done a lot of work for the magazine and I’m honored to be part of the National Geographic family. I still create my route maps with watercolor, paper, pen, and ink. Then they’re scanned in and I do all the labeling and marking in Photoshop.

Collins: Last May I went to the Amazon with Celine Cousteau and visited a number of tribes who are dealing with malaria and hepatitis. The journey has an immense level of adventure, but it’s not about getting to the top of something; it’s about telling a story the world needs to hear. This year I have been invited to join an international team of scientists and artists telling the story of global warming from the glaciers perspective. I’m excited to shift gears and tell stories that have a strong humanitarian focus.

Over the course of 20 years I’ve been fortunate to work with major brands in the outdoor industry. A year ago I launched Meridian Line, a lifestyle, art, and clothing brand based on my library of work. We’re now in 200 retail stores and 10 national parks and the outdoor industry gave me the most inspirational individual of the year award. It was humbling and confirmed that I’m going down the right path, following my heart and passion, and that by continually choosing to do what makes me happy I was making others happy as well.