After Effects is the de facto standard for all things motion graphics. While there’s plenty of debate about whether it’s the best place for visual effects (spoiler: it’s not), chances are that if you’re not dropping thousands of dollars a month on a Flame license, then you’re doing your mograph in After Effects. Scene Group, a spinoff of motion graphics juggernaut Mainframe North, wants to change that. They’ve just released Cavalry, their dedicated motion graphics application fresh out of public beta.

Cavalry focuses on simple approaches to non-keyframe driven animation, substituting the nested complexity of After Effects’ scripting with intuitive built-in procedurals. Compositing occurs on the GPU, so most things happen in real-time without caching. The video below is a good example of how a complex design problem can be solved with just a handful of adjustments:

Now if all this sounds familiar, you may have been around for the birth of Motion, Apple’s foray into motion graphics. When it hit the market, it was lauded as a breakthrough in mograph, emphasizing animation via “behaviors” over keyframing. It was also part of the new wave of software that leveraged GPU compute power to handle on the graphics card real-time feats that were impossible on the CPU at the time.

I confess that I bought into the dream; the idea of a system that could produce Flame-like real-time performance on commodity hardware was attractive. While Motion is still very much alive, it is a $49.99 download from the Mac App Store, and hasn’t replaced After Effects as the go-to destination for motion graphics work.

This begs the question: will Cavalry fare any better? To answer that question, let’s first look at what went wrong with Motion. Really the issues with Motion were its top selling points: real-time performance and behavior-driven animation. Let’s look at each in turn. 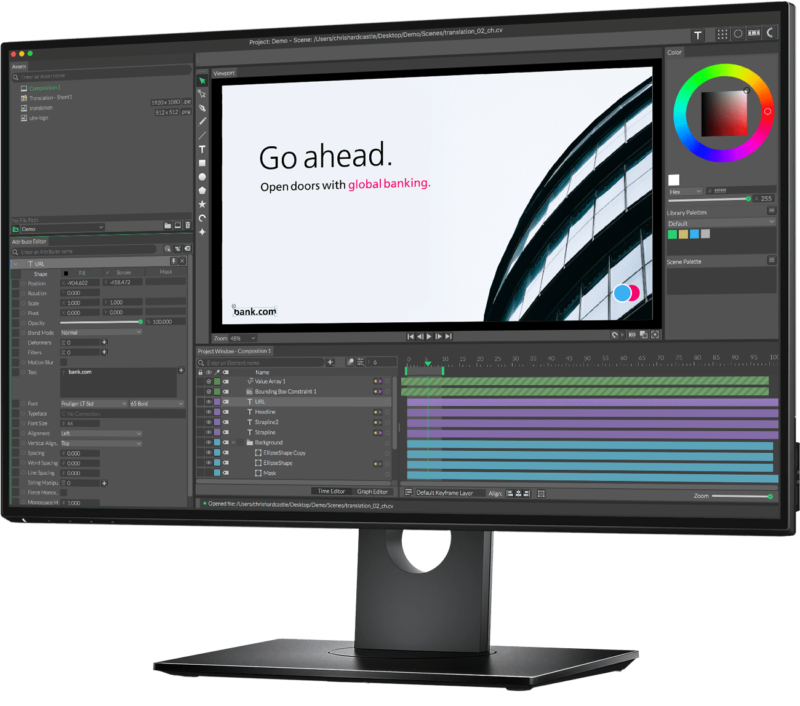 A huge mistake in software design is the idea that artists need to design in real-time. Yes we need to see previews in real-time, but we actually design faster than real-time. An artist working at frame 12 can already visualize in her mind what will happen at frame 25 and adjust keyframe values accordingly. It turns out the real-time playback can sometimes get in the way of workflow efficiency, since the artist is waiting for playback to loop  to see the results of their changes. They could of course stop and rewind, but the point is real-time playback is really only necessary as a reflection process while working, not as a design-time environment.

After Effects had always been a keyframing machine in the full figurative sense of the word. From the very earliest days of the app (at least when I started using it way back in 1997 at version 3.1) the developers wisely chose to feature the dope sheet as the core editing modality. In other words, focus on timing and trust that artists will develop good intuition about values without having to visualize the curve. That turned out to be a good assumption and is the reason that a skilled After Effects artist armed with the ‘p, t, s, and r’ keys can pound out keyframes for an animation faster than it would take to watch it play out.

In contrast, Motion was never built with those kinds of efficiencies. The interface was over-spaced, and the parameter settings were divorced from the dope sheet, making it a slower mapping process for artists. The real time was fun, but all of the interface efficiencies that make After Effects artists efficient were missing. Time has improved the interface a little, but it still lacks that direct connection between timeline and keyframe setting.

Human interfaces miss the point: We know how to use a computer

Another big mistake I see software designers make is over-embracing the idea of “human interfaces.” The concept is to make the ux (user experience) of the software more natural to the way humans usually do things. I have no issue with the idea itself, but when developers substitute it for a workflow that has served us well for decades, that rubs me the wrong way. We have to understand that computer users are both a product of their “humanness” and fifty years of collective learned experience interacting with personal computers. We’ve adapted to computers just as much as designers have made computers adapt to us. Software should always be designed with a recognition that people have an expectation for the ways computers should behave and not force them to throw that knowledge away. (Yes, I still want Save As to be a first class citizen in OS X.)

Motion added some great animation tools in the form of behaviors. These are visual widgets like ‘Throw,” where you simply drag an arrow in the direction you want an object to move and it moves that way. Need it to fall as it moves? Add a gravity behavior on top of it. What’s not to love?

It turns out that artists are very picky about the nuances of animation. They don’t just want an object thrown, they want to precisely place it at a destination down to the sub-pixel. Behaviors are handy for general tasks, but make it difficult to fine-tune the final animation. This might be OK if the system provides a way to add this finessing, but typically such tools get you 95% of the way there, then leave you stranded.

Cavalry boasts the same hallmarks as Apple Motion: real-time performance and procedural animation. Does it fall down in the same areas as Motion? It’s early days, but I think the answer is ‘no.’ 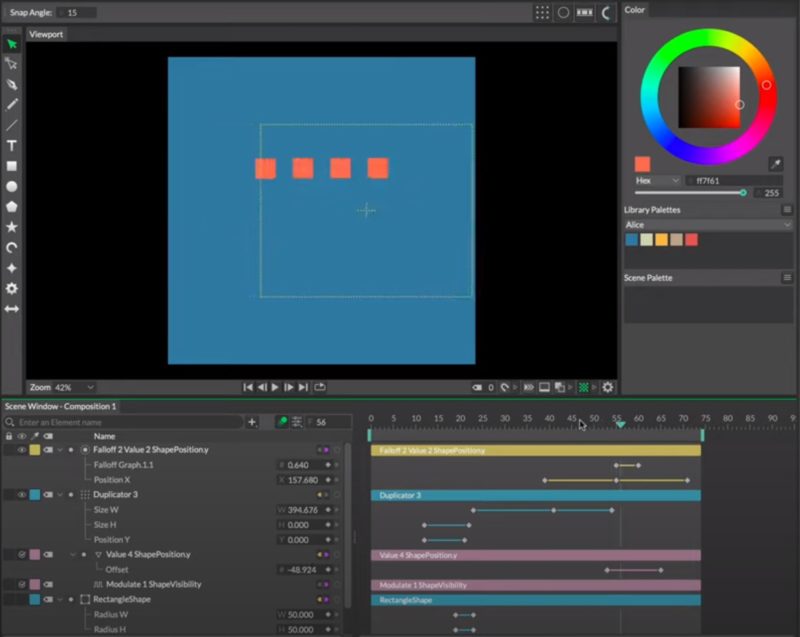 Firstly, the emphasis is on animation innovation; the real-time performance is really just a bonus. The interface looks surprisingly, ‘After Effects-like.’ Hard to believe that’s an accident. The dope sheet looks very much like After Effects, arguably with a face lift. Parameters are exposed where you want them and kept reasonably compact to allow for multiple layers to be edited at once.

The other thing I already like about the approach to procedural animation: the “behaviors” are parameter-heavy, rather than Motion’s unique UI-driven HUD editors. Slower learning curve for new users, but more tweak power for experienced ones.

Still, some of the processes may be a little too simplified. The “connection” system (aka ‘Pick whip’) for example, seems to lack any kind of offset or scale function, meaning all links have to be a 1:1 value relationship. The documentation makes it clear that connections are not a replacement for expressions (which are also available) but unless I’ve missed something, the lack of scale and offset severely limit the usefulness of connections. This may well simply be a matter of a version 1.0 feature limitation.

Nonetheless, Cavalry seems to have avoided the pitfalls of Motion by preserving the efficiency of keyframing workflow and maintaining flexibility in procedural animation, allowing artists to more easily “tweak” the final results.

Will Cavalry dethrone After Effects as the new bedrock of motion graphics work?

The developers of Cavalry have set the sites squarely on becoming a solution to a problem that many motion graphics artists didn’t realize they had. In his 2019 blog posting introducing Cavalry to the world, company principle Chris Hardcastle made these statements:

The incumbents in 2d animation have been offering very little true innovation in recent years. Built on ageing architectures they are becoming increasingly reliant on 3rd party plug-ins for any significant feature improvements. While we use and love many of those plug-ins ourselves they can often result in artists jumping through hoops as they wrangle disjointed workflows.

We see a huge gap in the market. One that we intend to fill with Cavalry.

Those are some fighting words for sure. Vaguely diplomatic, but we all know where the cannon is aimed. So is this a sea change for motion graphics? Maybe, but not in 2020.

Cavalry has several hurdles to overcome. Firstly, its feature set looks a little lean in the version 1.0 product. That’s to be expected; After Effects has had almost three decades to build up its feature set to where it is today. The chances that you could jump ship today and move to Cavalry for all your motion graphics needs are slim. There may be a few niche designers who fit that category, but most of us will find something in our workflow that Cavalry is not yet ready to handle.

Then there’s that whole learning curve thing. I confess that I’m very much looking at Cavalry from the outside in right now. The idea of learning yet another application to do what I can already do elsewhere isn’t particularly agreeable. Granted, they’ve done a great job of making Cavalry intuitive to After Effects artists, but if you’re asking artists to invest time and change workflows, you need some significant incentives. “A better way to animate” gets you some of the way there, but is it enough to push an entire industry toward the goal?

Possibly the biggest issue is plugin support. After Effects is as much about the plugin ecosystem as it is the host application. Some After Effects plugins are really full software packages crammed into the Effects pane. People invest both time and money in their plugin suites and build them into their workflows. Even if Cavalry includes a magical API for third party developers, they’ll need to garner a solid user base before cash-strapped developers can justify the expense of porting their products over.

Scene Group has been smart about pricing: an annual subscription will cost you 12GBP a month (a little over $15 USD). Of course you’re up against After Effects which comes bundled with the entire Adobe Creative Cloud suite at a price as low as $30 USD (if you shop carefully for your renewal each year). Still, it’s at a price level that you can justify for a tool that could dramatically speed up certain tasks. There’s also a big nod in Cavalry to corporate communications artists. Plenty of data-driven workflows for creating animated infographics from dull spreadsheets. This alone could be a solid market for Cavalry to drill in to.

Yes, it’s worth a look

Regardless of whether it will or could replace After Effects for some artists, it’s a tool worth checking out. A free—albeit resolution-limited and watermarked—version is available for testing and training. For a month-to-month rental you’re looking at 20GBP (around $26 USD), so even if you decide to use it on the occasional project it won’t break the bank. As mentioned before, annual subscriptions work out at 12GBP a month, with an introductory 25% off for early adopters. Keep an eye out for an upcoming moviola.com Survival Guide to slingshot you into your Cavalry career…