Motion is a GPU-based application, which means that the graphics card you choose makes all the difference in the world: the better the card, the better Motion’s realtime performance. There are a myriad of cards on the market, but if you have a Mac Pro, your choice is a simple one: you want the Radeon HD 3870. It’s quite simply the best card out there right now for Motion on a Mac Pro, it works on all Mac Pro models, and it’s surprisingly inexpensive at about $200.

Now, you may be wondering about the NVIDIA GeForce 8800 GT 512MB card that is available when you configure a new Mac Pro on the Apple store. Well, due to driver issues, we just haven’t seen the level of performance that card is capable of – in fact, some have found it slower than the stock Radeon HD 2600 XT. And on top of that, folks who recently upgraded their OS from 10.5.4 to 10.5.5 saw a performance decrease with that card! Here’s some test results:

There’s one other build-to-order option, the incredibly expensive
NVIDIA Quadro FX 5600 1.5GB. But don’t waste your money – for Motion, the 3870 performs better.

I was recently working on a project at dvGarage where we upgraded three brand new Mac Pros to the 3870. The combination of the card upgrade and increasing the stock 2GB of RAM to 10GB had a huge impact on Motion’s responsiveness, playback frame rate, rendering, and exporting.

Installing the card is straightforward. Basically, you pop out the stock card and pop in the 3870. And you don’t have to remove the old card if you don’t want to – just make sure the 3870 goes into one of the 16-lane slots. 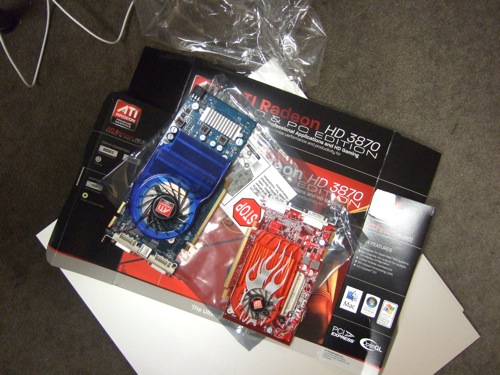 The one tricky part is that you need to connect the power cord from the card to the motherboard, and it’s a cramped space you have to work your hand into. 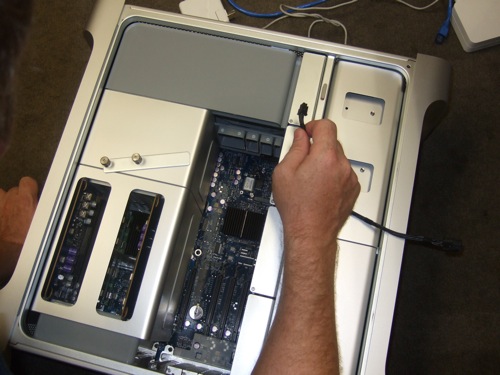 Exactly how much increased performance did we see? I didn’t try to quantify it, but we were using Motion to build complex projects that included composited RED footage which was almost unbearable to work on with the stock Mac Pro card and 2GB of RAM. With the 3870 and 10GB of RAM, it was a completely different experience. For specs, check this Bare Feats article:

If you are considering an iMac, Motion runs quite well on these machines – but make sure you get the ATI Radeon HD 2600 PRO when you configure the machine. The graphics cards in iMacs are not user-swappable, so you need to get the correct card when you buy.

For the MacBook Pro before this week, Motion works quite well, but for heavy lifting you’ll want a Mac Pro. As for the brand new Mac Book Pros with the combined integrated graphics and the NVIDIA GeForce 9400M + 9600M GT with 512MB, I’m eager to see what the performance looks like. I have some trepidation, however, because of the issues with other NVIDIA cards not being optimized for Core Image effects – but we shall soon see.

Where do we go from here? I hope we see new and improved cards (and new and improved towers) in the near future. For a glimpse of what may be to come, check this Bare Feats article on possible upcoming cards for the Mac:

If you want to purchase the 3870, one place I like is Other World Computing: