The biggest update ever in the iClone real-time 3D evolution is here now. The virtual production platform iClone 7 empowers everyone, from indie filmakers to pro studio crews or anyone wishing to share a vision. 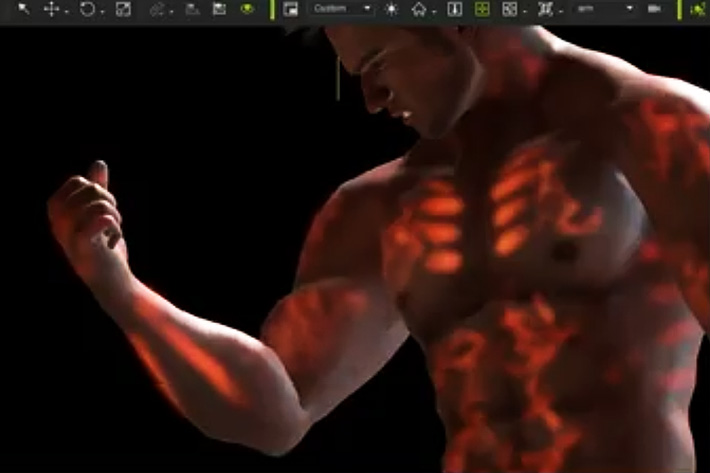 It’s a tour de force that is unmatched in the industry, says Jeff Jasper, Oscar-winning team member/FX Supervisor Interstellar, referring to iClone 7, available for Windows from Reallusion, from $199.00.

Compared to game engines enhanced with cinematic timelines, iClone 7 is, according to Reallusion, “much easier to start or include into an existing production pipeline as there is no need to have specific game development knowledge or coding capabilities.”

We’ve revealed here at ProVideo Coalition, in the past months, aspects of iClone 7’s new features, but now that it is released, it is time to point to all the new things users can find in the program: 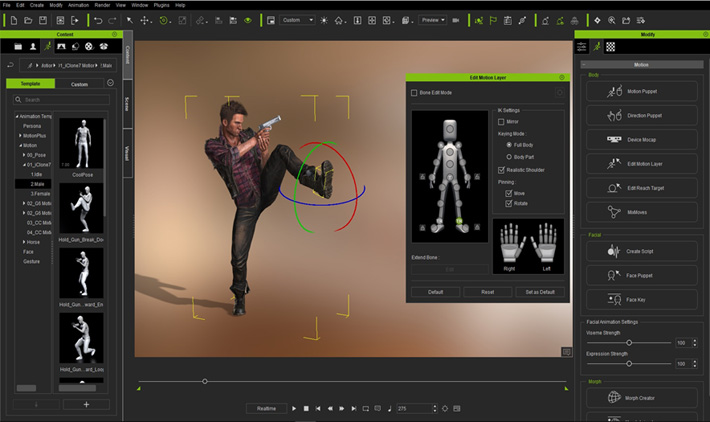 There is so much to discover inside the program, that it makes sense to go deeper into some of the aspects that make iClone 7 a valuable tool for artists. 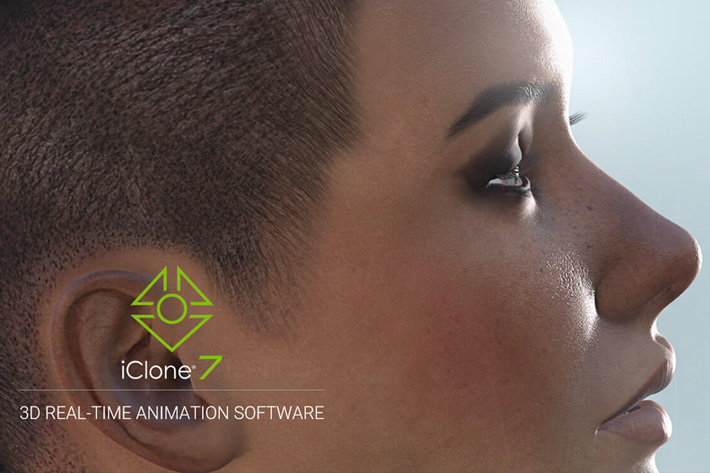 Motion Layer Editing
Instantly animate any character with intuitive animation tools that record face and body animation with a unique puppeteering engine. Freely control body parts with HumanIK, and use motion layer editing to quickly fine-tune characteristics of your animation.

Morph Animation
Achieve dynamic and organic animation performance with a series of morphs added to props or skin-bone characters. This is a simple technique that adds incredible performance enhancing animation options that can be keyed and controlled inside iClone 7. The Morph Manager edits morph groups from a hierarchical model, and you can import OBJ morphs from 3D modeling or sculpting tools. Link selected morphs to adjust them individually using the iClone 7 Morph Manage interface. All imported blend shapes are available in the timeline with individual morph tracks. You can set keys and tweak values for each morph track in order to achieve organic movements between morphs.

Physically-based Rendering (PBR)
iClone 7 introduces PBR as the new real-time renderer for iClone users. Not only does it deliver amazingly realistic visuals, but it also serves as the new material content standard that helps maintain a consistent look between iClone 7, 3D game engines, and popular PBR design applications like Substance Painter. 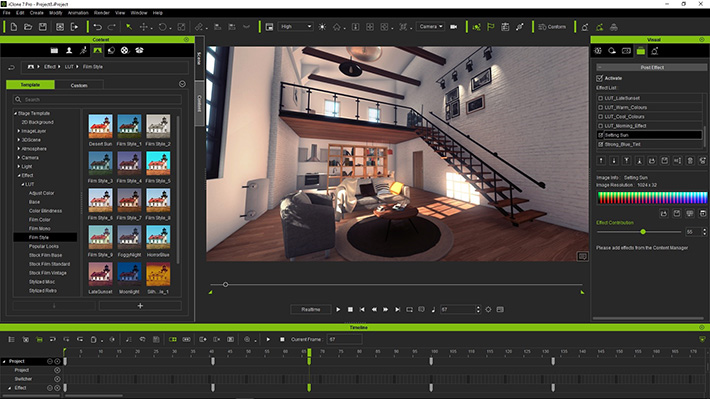 Virtual Production & Direction
Produce professional shots in real-time, using industry-standard iClone cameras like Alexa, Red, Canon, and more! Use iClone 7 for all your virtual production requirements including previz, and techviz; and take advantage of the new 1:1 seamless camera pipeline compatibility with the ability to import or export cameras via FBX.

“iClone 7 represents a huge leap in features that take iClone to a whole new level for professional production workflows.” Says Jeff Jasper, Oscar winning team for Interstellar as a digital FX supervisor for New Deal Studios. Jasper adds that “Studios have long dreamed of an animation platform with integrated performance capture, procedural animation and pipeline scripting in a package that also delivers stunning visual quality in real-time. Add in flexible integration with 3rd party software and game engines and you have a tour de force that is unmatched in the industry. Delivering on features like realtime GI with reflections, full PBR workflow and viewport rendering, HBAO+ and Shadow Mattes all bring the level of realism to the render to unprecedented levels.”

Jeff Scheetz, NASA SEALS, had this to say about iClone 7: “Not that long ago the only filmmaker who got to do this was James Cameron when he made Avatar!” Now, the Florida animation studio takes feature-length screenplay ‘NASA SEALS’ into virtual production with Reallusion iClone and Noitom Perception Neuron. The new era of community inclusive tools available to studios and indies today allow for directors, producers, writers, and animators to collaborate in real-time visualization, bringing scripts to life with 3D animation.

iClone 7 is now plugin-ready for developers and technology companies to connect hardware and software with iClone.  It is already integrating with the latest technologies including the latest NVIDIA real-time visuals. iClone 7 features technology partnerships with Allegorithmic Substance & Painter, NVIDIA Gameworks, Faceware, Xsens, Noitom, PopcornFX, and others.

iClone 7 is available for Windows from Reallusion – from $199.00