I knew something woke me up bright and early this Friday morning, September 10. I first thought it was the cool fall-like weather as the windows were open last night for the first time but after checking Twitter while the coffee brewed (this is before 6:00 am central time) I realized it was all the news flowing out of IBC 2010 since they are well into their day. The Amsterdam halls were filled with announcements from Avid, AJA, Blackmagic Design, Quantel and The Foundry just to name a few. Here’s a round-up of some of these announcements with links over to some further reading. 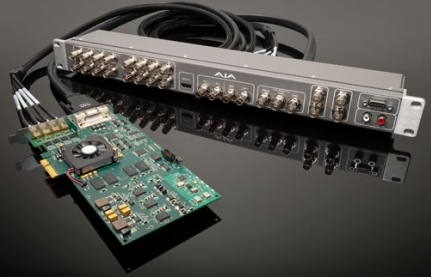 After a relatively quiet NAB it looks like AJA has pulled out a ton of new products. The big new i/o card is the AJA Kona 3G (replacing the Kona 3), delivering “Unrivaled Flexibility for Professional Video and Audio I/O.” Here’s the bullet points:

On the Mac platform

On the PC platform

This is going to be a $1995 unit with a $395 breakout box. Expect it in October. That looks to be a price reduction from the Kona 3 as that’s listed at B&H for $2,990. I don’t know why you’d want to buy anything less than the 3G these days unless you need some specific analog input that the 3G doesn’t offer. The AJA Kona comparison matrix is the place to compare these cards. 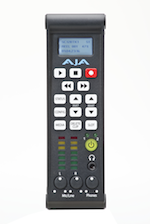 AJA also announced the Ki Pro Mini, a smaller, more affordable version of their very cool Ki Pro portable, ProRes hard drive recorder. The Mini is smaller and more easily mountable (especially with an optional mounting plate) and records to CF cards. Installing CF cards into this unit is great news, no moving parts to a hard drive plus CF cards continue to go down in price so you can have a whole box full of them. There looks to be 2 CF card slots. My first question would be if the CF cards are hot swappable during recording to allow continuous recording of long events. You would think so. The bullet points:

And AJA also introduced the Hi5-3D Mini-Converter For Stereo 3D Monitoring … if you’re into that 3D thing.

The big word from Avid is a new software only version of Avid DS. I think that’s one that many of us didn’t see coming. This idea of software only versions of high-end post tools is a trend that Avid’s continuing. It’s great for the manufacturer as it gets more tools in the hands of more people and great for the customer as it makes these tools more affordable. The Avid DS software bullet points:

This looks to ship in October 2010 for $9,995. It’s worth nothing that a license “comes standard with a copy of Media Composer® 5 software” so you’ve got your offline and online right in the same package. There’s quite a community of diehard DS users out there so this will be great news to them. I don’t see a mention of an i/o card but the DS has had an AJA card and a comment from Avid pr says “AJA 2Ke Dual link I/O card with K3 breakout box.” And that was later confirmed with a “yes on 2Ke; not today on AJA 3G.”

Avid also announced new EUCON partners for their recent Euphinox acquisition: RED, Autodesk, The Foundry. Expect MC Color control surface support for applications from those folks in the future. The MC Color design should make it easily adaptable to applications other than Apple Color.

The big Blackmagic Design news of late has been the impending release of DaVinci Resolve 7.0. The announcement at NAB 2010 included the Mac version for an unbelievable price of $995. It’s now shipping from resellers. I’ll give a plug to the first reseller that I saw mention the shipping Resolve for Mac, Silverado Systems. Their availability lists it as “Now shipping (units coming into Silverado shortly from Blackmagic).” Word on the street is that it’s not going to be available as a download so get your order in!

Blackmagic also updated a lot of their hardware products including the DeckLink HD Extreme 3D+ and the Compact VideoHub which is labeled as “the world’s smallest and most affordable 40 x 40 3 Gb/s SDI router with re-clocking!” Couple that more affordable router and a few video cards with software versions of all these high-end tools and you can really put together a professional post facility at prices never before seen. Blackmagic also introduced a cool little iPad app all to control their Videohub routers. That’s nice forward thinking. All of the Blackmagic news can be seen on their press page.

Here’s the bullet points on the quite affordable $995 DeckLink HD Extreme 3D:

Quantel probably isn’t a company that many in post follow as they don’t have the installed base here in the U.S. that Avid or Autodesk does. We have an eQ in house so I always keep an eye on them as well. They had quite a few announcements for IBC 2010 as well including the availability of some new noise reduction and grain management tools and new stereo tools in version 5 of their software.

The Quantel thing that really caught my eye was a comment in this YouTube video (this is part 1 of what will be 4) of the Quantel press conference:

I’m not sure exactly who’s delivering this first bit of Quantel news but he says around 3:58: “this year for the first time more than half our post business came directly from stereo 3D related sales. For us it’s bigger now than our 2d offering.” That’s was a bit surprising but they have been the leaders in stereoscopic since day one. Quantel really seems to have quite the foothold in 3D.

Lots of others announced too.

Yesterday The Foundry gave us the first real look at Storm. It’s a dedicated RED workflow tool: “Your RED digital camera workflow, your way. From shooting on-set to delivery.” It’s pretty cool looking and the website headings say it this way: Check your takes, Get the Look, Keep it RAW, Out to edit, A real breeze. Yes RED does offer a vastly redesigned REDCINE-X for free but for $375 Storm is probably going to be a much better option for the RED heavy user. The one big thing that seems to be missing, after a read over the Features page, is support for other NLEs other than Final Cut Pro. It looks like there’s some great FCP integration but it seems like they are limiting their market a bit without Avid or Adobe support. Of course that FCP / RED market is a pretty good size but according to word off the IBC floor there are goals to support other workflows “at a later stage”. Here’s an early thought on Storm from Truelove Tech. He makes a good point comparing Storm to Lightroom.

Autodesk also had an announcement yesterday of Flame Premium (pdf link). It’s a new package that “combines the latest 2011 extension 1 releases of Autodesk Flame, Autodesk Smoke Advanced and Autodesk Lustre software into a single offering, designed to help post-production companies expand and diversify their creative services more cost-effectively. Flame Premium is being launched at a price substantially less than the cost of purchasing licenses of these products individually. In addition, new cross-grade pricing* offers some Autodesk creative finishing customers** potential savings of up to 85 percent.” If you’re an Autodesk customer you probably already heard about that but as costs continue to shift across the entire industry this Autodesk news is something we all need to be aware of. Autodesk has a dedicated IBC area setup at their website to help keep up with the news.

The best coverage of the Autodesk news is in episode 91 of fxguidetv. In fact the fxguide crew is in Amsterdam so keep an eye toward their coverage (including the REDcentre podcast) to get more info on Storm, RED and probably a lot of other stuff too.

Cinedeck debuted the Cinedeck EXTREME 2.0. This new version will include support for support for Apple ProRes, DNxHD and CineForm Uncompressed.

Barco unveiled a new projector geared toward post-produciton. From the Barco press release: “The Barco DP2K-P is the world’s only Enhanced 4K-ready projector specifically conceived and built to meet the enhanced performance needs of post-production houses.” That’s an interesting product. The press release doesn’t list a price though.

There’s also Adobe highlighting a few things and a tweet from Studio Daily about Sony Pro Vegas 10 adding 3D editing and Blu-Ray authoring in an upcoming release. There’s probably a lot more that I missed but that’s the roundup of some interesting stuff that I’ve seen come out of IBC thus far.