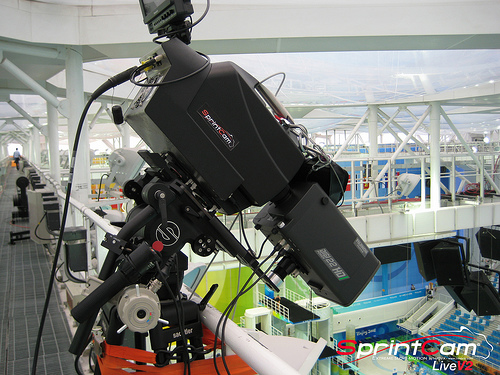 Among the features and enhancements of SprintCam Live V2.1 are new algorithms for unprecedented image quality, new user-friendly remote controls that enable fine-tuned settings, and a slow-motion remote with a new cueing system that allows for quick and easy selection of the sequence to replay.

“Building on the success of SprintCam Live V2 at numerous major events culminating in Beijing, this new version brings further usability and quality benefits to our customers,” said Laurent Renard, CEO, I-Movix. “The hallmark of SprintCam Live V2 has been its combination of unmatched performance with the simplicity of operation that allows any camera crew to be up and running after only a few minutes of training. With SprintCam Live V2.1, we’ve concentrated on extending our lead in both these areas while increasing the already high quality of the images produced.”

SprintCam Live V2.1 remains the only fully integrated ultra slow-motion system for broadcast, offering unmatched frame rates in SD slow-motion capture, exceptional image quality, market-leading light sensitivity, and ease of installation and use. The system can be operated out of the box, in conjunction with an EVS LSM server for sequence storage, or with any SDI recorder.

Bucky Gunts, head of production for NBC Olympics, said in this respect: “I was very impressed with the clarity and quality of the images of the SprintCam Live V2 as provided by BOB last summer in Beijing.”

I-Movix (www.i-movix.com) is a Belgian company with market-leading technology in the domain of extreme slow-motion. The company’s debut product, SprintCam Live, was launched at IBC2007. SprintCam Live, which is now in its second version, is the first true full broadcast integration solution for extreme slow- motion, offering the unprecedented combination of up to 10,000 fps and instant replay. The technology has applications in live sports and other live TV productions, as well as in commercials, documentaries, feature films, and scientific R&D.

The company is headquartered in Europe, with a growing global network of distributor partnerships.
Website: http://www.i-movix.com