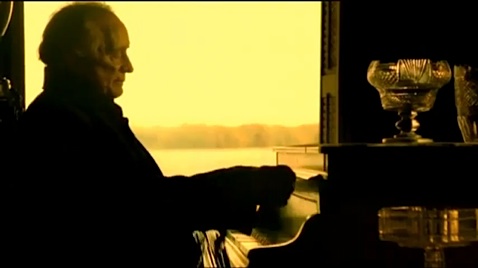 Here’s a short excerpt from the 2005 DVD ‘The Work of Director Mark Romanek‘ that talks about the making of the Johnny Cash music video for “Hurt.” Romanek discusses how he initially conceived and shot a very straightforward performance music video in the home of Cash. It wasn’t until the edit that they decided to add some archival footage, to add more emotional depth to the video…

In my opinion, the real power of the music video is directly related to the addition of archival footage of Cash, and the skillful contrast of those images with the present-day images of an aged man at the end of his life (indeed, Cash died just seven months later). Of course, a beautiful song by Trent Reznor was another major element…and when Cash sings the words, you truly believe that he’s lived it.

In the making-of video embedded below, Romanek and others discuss very candidly that the concept completely changed in the edit, that they did not shoot the video with the final montage result in mind. Amongst all that candor and discussion about the video, a passing reference is made to Robert Duffy, the editor who cut the video. It seems to me that that Robert’s skill must be one of the direct reasons this video works as well as it does. Without the skillful insertion of iconic archival scenes, this video wouldn’t have near the same emotional impact. A good editor can elevate your vision far beyond what the initial concept was, and this case is a very good example of that. And my guess is that Romanek knows who butters his bread, as he’s collaborated with Duffy for years.

Here is the making of “Hurt”:

And here is the finished music video:

So there you have it, shooters. Feed and water your editor regularly, because he or she is quietly working behind the scenes, making you look better every day. You can see more of the excellent commercial work of editor Robert Duffy at www.spotwelders.com.
(If you are curious about the 1903 editing reference, see this Wikipedia article that references the 1903 film ‘The Great Train Robbery’ as one of the first examples of film editing.)