Greetings, all. My name is Alan Shisko, and I’m a freelance motion graphics artist based out of Toronto, Canada. I’m pleased to have been asked to contribute to the ProVideo Coalition community, and I look forward to many and varied posts on the subject of motion graphics design.

By way of introduction, I might first invite you to take a look at my reel here. If you’d like to dig a little deeper into the work that I do, you’ll find a fairly complete catalog of recent work here.

For my first post, I’d like to address the question of “how to get started” in this industry (that is, motion graphic design). I often get emails (and even phone calls) from people who are looking for a leg up. They’ve done a bit of research, seen some reels, know what they’d like to accomplish and are interested in getting started. But they haven’t a clue where to begin.

It’s a very tricky question to address, and I think it’d be best to begin with how I got started in this industry. It’s a bit lengthy, and if you want to skip the verbose back story, just pop down to the last paragraph or two.

I’ve always been a visual person. I’ve also got what I consider to be a strong sense of depth, space and geometry. When sitting around, for some reason I often find myself finding all of the angles in the room (like the ceiling, or a banister or some such thing) and continue the lines to visualize where they might intersect, and how it might look. I bring this up first, because I believe that folks either do or don’t have an aptitude for certain things. That said, it is certainly possible to achieve anything through sheer perseverance, but in my life, I like to pursue things that are ‘easy’ and that don’t drive me into the ground. I COULD become a good gardener, for instance, but generations of plants would suffer. So, take a look at motion graphics and ask yourself if you CAN do it, not just whether you WANT to do it. Do you ‘live’ in a visual world? 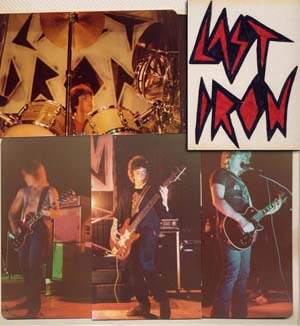 As a youngster, I had an innate desire to create imagery. I designed my very first logo for my rock band (“Cast Iron”) when I was 13 using letraset and black markers: honestly, I think it still looks kind of good, even if it does read as “Last Prom”! I bought my first still camera (a Nikon FG) in Grade 12, and then discovered a dusty old darkroom behind the chemistry lab. I still remember the magic of seeing that very first black and white image appear in the chemical muck. It was truly a revelation, and one which stays with me to this day. This led to my considering my post-secondary school options. Having dropped Calculus in Gr. 13, architecture (another of my loves) was out, as was a career in medicine (bit of a flight of fancy, that). One night, I happened to overhear a friend talking about his plans to attend the Film program at York University here in Toronto. It clicked: Film! That’s exactly what I wanted to do, but hadn’t given it a thought- I figured that the only place you could ‘learn’ filmmaking was in California! I applied, was accepted and off I went.

And now to the question of schooling, and it’s value in an artistic career. I graduated with an honours BFA in Film Production in 1991. In retrospect, I’d say that my five years in University was “OK”. It certainly gave me an opportunity to experiment to a certain degree, but that said you can only experiment so much when you’ve got a $30,000 production budget (with your parents as ‘executive producers’), a very small crew (some of whom were dependable, while some weren’t) and not much of a clue what you’re doing technically. I dreamt of being a cinematographer. I could load a mag in total darkness in no time, and I read the ASC manual before going to sleep. Oh, and mistakes: I could (and did) make lots and lots of mistakes in school. What I found I truly lacked, though, was a compulsive, burning desire to make movies. I discovered that the whole filmic process was too gargantuan for me to contemplate. I felt a strong desire to ‘downsize’, to find something that I could do on my own.

I went back to photography. I can’t overemphasize the value of having a great teacher. Everybody has had their favorite teachers, and at York, mine was a fellow named Jack Dale. I took several photography classes with him and he, more than anyone else, fired up what I call my ‘visuality’. I had truly found my calling. Upon graduation, I hung out my shingle as a freelance photographer, specializing in portraiture and photography for the arts (dance and theater companies, for the most part). The early nineties, however, were a pretty slim time in my neck of the woods. Gigs were few and far between. I assisted with Renzo, an established pro photographer, and even he was having a very hard time making a go of it. The day finally came when my brother (who worked in the video production industry) said that he had a better offer, and wanted to know if I’d be interested in taking over his position as in-house video producer for a large explosives corporation. I remember the day I resolved to accept the position. I truly thought I was turning my back on my dream (photography) and my life (starving artist).

At ICI, I was a one man operation. I wrote, shot and edited all manner of corporate vids. I was working with an ancient, tape-based a/b roll editing system. A couple of years in, though, the department picked up an Avid MCXpress NLE system. Shooting and editing became infinitely easier and more flexible. Pretty much overlooked in the purchase was the inclusion of an inexpensive little application called “Adobe After Effects”.

Now it took a bit of doing, to be sure. I started playing with AE and made some rudimentary titles. Pretty soon, I “got” it… it was like Photoshop, but stuff moved. In no time at all, I found myself starting to obsess about it. I’d stay until the wee hours of the morning trying out various approaches to visual problems, and digging deeper and deeper into the software. There weren’t any ‘reels’ on the internet at the time, so I went to design book stores and tried to duplicate (and move) the imagery. Motion graphics became, to me, the perfect application of my visuality: the (somewhat) immediate feedback (akin to photography), the temporal benefits of film (and the visual benefits, with the introduction of 3d space in AE5) and the flexibility of working with large or small (or no) groups of people.

And that brings us to the gist of it… how do you ‘learn’ motion graphics anyway? Speaking from personal experience, I would not necessarily recommend courses in animation, compositing and design. You’d probably be attending a private school and laying out huge amounts of cash to do what I feel you can just as easily accomplish at home with a couple of books and a burning obsession to learn as much as possible. Get the technical training vids from Totaltraining. Get the Meyers’ books. Visit motiongraphicslab for free projects that you can dissect. Read Mark Christensen’s books. Take some courses at fxphd.com. Download John Dickinson’s tutorials. Pick up some titles (including one that I authored) at MakingItLookGreat.com. Join and ask stupid questions at the Toolfarm forum, the COW, and sign up for the Media-motion After Effects list. Download reels from the internet and try to duplicate them: don’t worry if you can’t get it just so, let fate turn you in other directions. In fact, if you DO copy something exactly, then I believe you’ve failed. Let serendipity take you by the hand, then follow. You’re in a creative industry now. Be creative!

Look for- and perhaps you’ll get- a gig working for little (or nothing) at an established design firm. Jump to it, and remember you’re saving yourself $30,000 by not going to a ‘design’ school. ‘Spend’ it instead by working for cheap at a great design house. Just don’t be taken advantage of. And then there’s the issue of school. Hey, wait a second… didn’t I just say don’t go to school? Yes, but look closer and you’ll see that I said “don’t go to a private animation and design school”. Do consider going through a program (or taking courses) in traditional art and design. Think art history, painting, sculpture and the likes. Nothing to do with motion graphics, you figure? You’ll find that that’s so very not the case. Take photography courses (with chemicals if you can find it… digital photography is just hi-def video at one frame every now and again, in my opinion 🙂 Make sand castles. Look up, and down. Tape things to sign posts. Design and build your own house. Edit music videos and post ’em on YouTube. Read. Surf. Daydream. Do what you need to establish your visuality, and do it with intent and purpose. And don’t forget that a very good way to learn is to help others.

I like to say that motion graphics is like architecture: so many disciplines wrapped up into one complex package. It’s technical, it’s artistic, it’s easy to “do” but so very hard to do well.

So. Did you skip the ‘verbose’ back story and jump down here to the bottom to ‘get to the goods’? If you didn’t, then you must be pretty jazzed on motion graphics to wade through this lengthy post. But if you jumped right to this paragraph to get “the answer”, then I might question whether this gig is truly for you. Not because I’m some sort of motion graphics super-hero or anything and you should do what I say or else fail, but because I strongly believe that a bold and complete dedication to your motion graphics career (both technically and artistically) is necessary if you’re going to really ‘make it’.