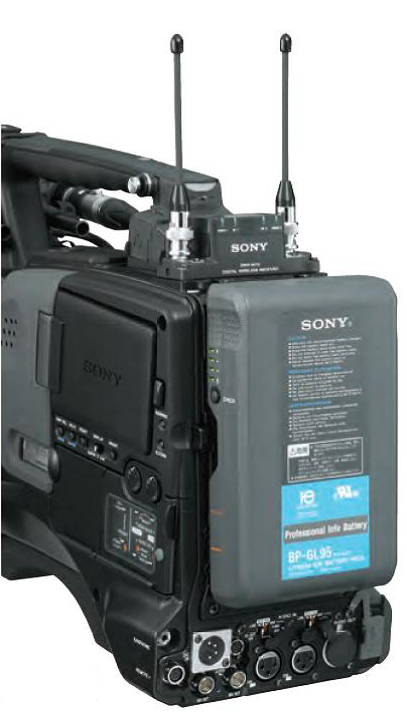 Sony’s pure-digital DWR-S01D wireless receiver is shown slotted into the back of a PDW-700 XDCAM® HD camcorder.

Under the hood, some of the new digital wireless microphone systems reveal an awkward truth. They actually convert the digital signal to analog for conventional wireless transmission. To us, this negates the basic advantage of digital audio: uncompromised sound.

Needless to say, a digital wireless mic system should mean pure-digital end-to-end. You might think that “digital” equates to a single standard of uncompromised sound. But in the world of wireless mics, Dear Reader, you’d be sadly mistaken. 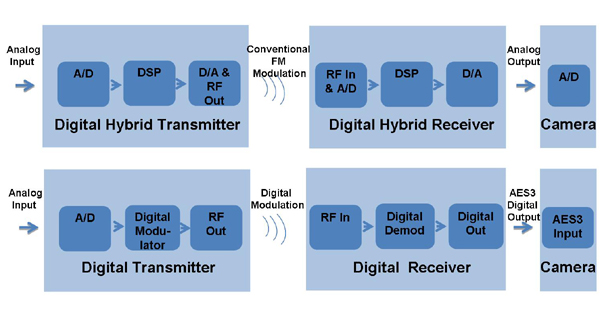 The “digital hybrid” system puts the signal through four A/D and D/A conversions, compared to just one conversion for a pure digital system.

The Sony system converts the analog mic input into robust 48 kHz/24-bit digital audio in the transmitter for digital transmission, digital reception and digital output to the camcorder’s AES3 digital input. This pure digital signal path protects your audio from the vicissitudes of analog noise and distortion.

Sony’s digital wireless system also provides a wireless remote control return channel from the receiver to the transmitter. For example, you can change transmission frequencies remotely from the receiver or even from the viewfinder of compatible camcorders. This makes a practical difference, as director of photography Thierry Humeau found out with the 2nd Marine Expeditionary Brigade in Afghanistan. “War theaters are crowded with all sorts of radio transmission or jamming frequencies and having a frequency-agile system was critical to quickly switch frequencies whenever necessary,” Humeau said. “Being able to do this from a single end using the DWR-SO1D unique wireless remote control feature was a huge convenience.”

The slot-in receiver is directly compatible with Sony’s latest camcorders, including the PDW-F800, PDW-700, PMW-350, PMW-320 and HDW-650F. The DWA-01D adaptor and required mounting bracket enable you to use the new system with legacy camcorders that include AES/EBU digital audio inputs. These include a wide range of HDCAM®, Digital Betacam®, MPEG IMX®, XDCAM®, DVCAM® and even HDV™ models.