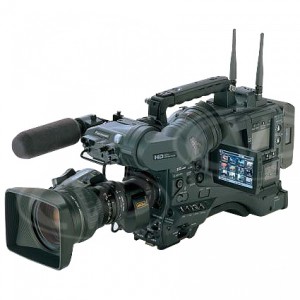 SECAUCUS, NJ (June 6, 2008) – The new Comcast Center, Philadelphia’s tallest and one of its most stunning buildings, features an enormous public lobby with a breakthrough video installation designed and produced by HDTV trailblazer David Niles.

Niles chose Panasonic’s AJ-HPX3000 native 1080p one-piece P2 HD camcorder to shoot the video for the lobby’s 80′ by 30′ screen, which engages passers-by with spectacular and inspiring imagery including life-sized images of ordinary business people performing extraordinary feats, such as flying through the air with a cup of coffee.

Today marks the official opening of Comcast Corporation’s new corporate headquarters, designed by world-renowned architect Robert A.M. Stern. The 57-story, 975 ft. building is built on top of the city’s Suburban Railroad Station. The lobby installation was conceived by Comcast Chairman and CEO Brian Roberts as a gift to the people of Philadelphia.

Niles, director/DP/designer/editor and principal of Niles Creative Group (New York, NY), enumerated the imposing challenges he faced on the project. “First of all, we knew the Comcast Center would be an instant landmark, demanding the highest level of creative achievement on our part,” he said. “Our audience, which consists of commuters literally in transit to and from the train station, has an attention span of 20-40 seconds at best. The display, an 80′ by 30′ LED screen, larger than an IMAX screen, is built into the lobby architecture and has 10 million pixels. There aren’t any cameras that shoot 10 million pixels!”

“From the onset, we understood that this would not be your typical lobby display flashing the time, temperature and local ads,” Niles continued. “Our mandate was to create original, emotional and ever-changing content-on a reasonable budget-that would be totally integrated into the lobby’s design. Essentially, the video itself would be virtual bricks and mortar-part of the environment yet kinetic.”

“Our screen has 10 million pixels – but a life-size person who appears on the screen doesn’t require 10 million pixels for video capture, two million suffice,” Niles explained. “Thus, the HPX3000, with its 2.2-megapixel CCDs, gave us a 1:1 pixel ratio and, consequently, an utterly photorealistic effect when shooting the actors and acrobats for the Comcast video. That was the paramount reason I chose the Panasonic camera.”

“The HPX3000 demonstrates incredible dynamic range, signal-to-noise and colorimetry,” said Niles. “The response of the camera was phenomenal and afforded us the highest quality attainable.”

“I consider the HPX3000 one of the top two HD cameras on the market, and the fact that it shoots master-quality 1080p makes it that much more valuable a tool for me,” he added. “It’s capable of a wide range of applications, from run-and-gun capture to gorgeous filmmaking.”

Niles edited the material using proxies in Final Cut Pro. Then the original footage was laid out on an Adobe After Effects 10 million pixel canvas. This way the content maintains a 1:1 pixel ratio from camera to screen.

“Our workflow was somewhat elaborate but bulletproof,” noted Niles.

It is at the point of delivery that the video becomes a seamless element of the Comcast Center’s architectural artistry. The Niles Creative Group has designed a unique delivery system with Artificial Intelligence (AI) built-in. The delivery system is unmanned, with 30+ HD servers feeding the screen. The wall runs 18 hours a day, seven days a week, with no repeating or looping of video. Instead, with AI control, isolated elements of content are brought together at the time of delivery to create playful and awe-inspiring vignettes.

The display system can run for 45 days without a sequence ever being repeated. Moreover, it’s estimated that it would take a typical Philadelphia commuter two years of hustling through the Comcast Center lobby before he would see all the permutations of images the system can conjure.

Panasonic Broadcast & Television Systems Co. is a leading supplier of broadcast and professional video products and systems. Panasonic Broadcast is a unit company of Panasonic Corporation of North America. The company is the North American headquarters of Matsushita Electric Industrial Co., Ltd. (NYSE: MC) of Japan, and the hub of its U.S. marketing, sales, service and R&D operations. For more information on Panasonic Broadcast products, access the company’s web site at www.panasonic.com/broadcast.