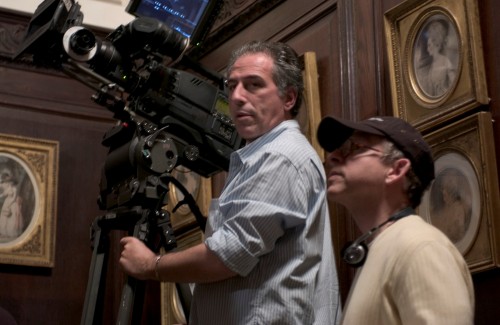 Bernard and Doris will play on HBO through the end of March; its next air date is Thursday, March 6 (ckeck www.hbo.com for details). The movie was directed by Bob Balaban, written by Hugh Costello and executive produced by Balaban, Jonathan Cavendish, Adam Kassen and Mark Kassen.

Director of Photography Rubinstein, a native of Mexico, worked for many years with director Alejandro Agresti, including the films The Cross (Cannes International Film Festival – Un Certain Regard) and Wind with the Gone (winner, San Sebastian International Film Festival 1998). His first collaboration with an American director was Casa De Los Babys from director John Sayles. Other recent films include Sorry, Haters (shot with Panasonic’s DVX100 camcorder) from director/writer Jeff Stanzler, and Puccini for Beginners from director Maria Maggenti. 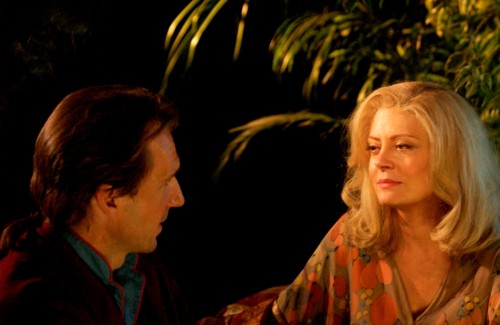 Bernard and Doris was an original production of Trigger Street Independent (New York, NY), whose mandate is to produce filmmaker and story-driven low-budget feature films, with most being shot on digital video or HD. The production company invested in its own VariCam, P+S Technik Pro35 image converter and a set of super-speed Zeiss prime lenses, all turned over to DP Rubinstein for the Bernard and Doris shoot. (The movie was selected to be presented at the 2005 Toronto Film Festival, but HBO Films picked it up in advance and it was not shown in Toronto.)

Bernard and Doris was shot on Long Island for six weeks at the end of 2005 with a budget described by the director as “less money than Doris Duke left her dogs.” Old Westbury Gardens, once the estate of the Phipps family, was used as the main set. Factoring in travel time from Manhattan, wardrobe and make-up, Rubinstein was left with six hours of principal photography a day.

“While I’d shot various films digitally, I hadn’t worked with the VariCam previously,” the DP said. “Prior to the main shoot, I spent several days at the location shooting B-roll to get acquainted with the camera, lens adapter and lenses, which I found to be an excellent combination. I felt most comfortable using the camera’s standard set-ups, as well as its CineGamma software. I didn’t tweak the detail, color or pedestal, but worked in terms of my light to create moods and colors.”

As Old Westbury Gardens is an historic site, the crew couldn’t touch or alter the walls, windows or ceilings in any fashion. “We had to use daylight as it was, extending the exterior light into our location,” Rubinstein recounted. “There is an early scene in the breakfast room, four glass walls, looking into a garden and beyond as far as the eye can take you. Sun was shining into the room, and I had to go for it. I couldn’t increase fills so I had to bring the sunlight down and control it as much as I could. I ended with true highlights from the sunrays but I still had details. I was working without a light meter, relying on the production monitor (Panasonic’s BT-LH900A 8.4″ HD/SD unit), and I took the highlights to the edge of clipping. The image with detail in the glowing sunlight and in the blacks held really well on tape, and ultimately on the film-out.”

“We needed snow in some scenes, and since there was none on Long Island that year, we traveled to Connecticut for a one-day shoot,” Rubinstein said. “We were shooting totally white landscapes and all the detailing holds perfectly well. I think the most demanding situation for a digital camera is shooting a day exterior – not all cameras are good at the contrast between light and shadow. But the VariCam held the highlights really well throughout, with details in the blacks.”

“Bernard and Doris is a period piece that feels contemporary; it required very intimate photography and cinematic feeling to intimate the wealth of the richest woman in the world – you had to smell the wealth in the look of the film,” the DP continued. “The VariCam responded very well to the challenges of working with an image converter, delivering a truly cinematic depth of field and texture that didn’t turn into noise. The camera with the PRO35 lens adapter respects light, the focus is selective and the proportion of figures in space looks very much as if it were shot on film. After a screening, I had veteran filmmakers approach me and insist that we had used film.”

The movie was edited on an Avid by Trigger Street Independent. After HBO acquired the project, some additional photography was done in studios with the main cast. “We had to match backgrounds to simulate the originals, and light the characters as close as possible to shoot tight close-ups,” Rubinstein said. “The shots blended seamlessly with the previous footage.”

HBO also took post a step further, changing some editing and the score. The final color correct and film-out were done at LaserPacific (Hollywood, CA).

“I’ve also shot a couple of shorts with the VariCam,” the DP said. “The camera produces a beautiful image, and I will work with it again with pleasure.”

For more information about Bernard and Doris, visit www.hbo.com/films/bernardanddoris/.