What kind of a difference can you see with Dell Precision 7910 workstations and AMD FirePro™ W9100 professional graphics?

As someone who fell in love with video editing during high school, it’s astounding to think about how much things have changed. The opportunity to be involved in a local live cable TV show got me started down this career path, but the tools we had in that studio versus the cheaper, smaller and more powerful everything that are now readily available feel like they’re from a completely different world. Were the days of three-quarter inch videotape really that long ago?

We can do so much more with so much less these days, and that’s something I’m very aware of as the owner of Digital Spatula, a video production and post-production studio in Los Angeles. We work on a wide variety of projects, which includes high-end corporate pieces, TV and film material, commercials, music videos, and of course internet-based media.

Like everyone else, the sort of work and projects we can take on are determined largely by what we can handle. With a couple edits bays in the facility, figuring out the logistics around buying, renting and/or replacing hardware is the biggest challenge we face. That’s despite the argument some of our freelancers might make to say that having the break room fully stocked with cheese puffs should be our top priority.

Junk food aside, our challenge around hardware is underscored by the fact that the biggest ordeal in my career has always been around the disconnect between seeing something in your head creatively and having the hardware to pull it off in a timely manner. I’ve never wanted to tell a client that I couldn’t deliver on time because the project is still rendering. Being a facility that’s on the smaller side means we absolutely have to get the most out of what we have, while also being able to make smart decisions around what we can and should change.

That’s part of the reason we jumped at the opportunity that was presented to us by AMD and Dell. They gave us the chance to put PCs in our bays to see how they would work. They were all loaded with AMD FirePro W9100 professional graphics cards, which is their top-end product. The box we ended up going with was the Dell Precision 7910 workstation. And we love our Dell 4K monitors. The resolution and color reproduction on those things is off the charts.

After getting everything up and running, we saw some nice speed increases in not only our 3-D rendering and layered motion graphics but also in our video editing. Both Premier and Avid take advantage of graphics cards in many ways. We mostly use the Adobe Creative Cloud suite for editing, design and animation of motion graphics, but the beauty of Adobe and Avid as well is that they work hard to make sure their software is written to take huge advantage of the GPU ( graphics processing unit) in our machines. It’s proof of the real-world benefits that are created when the hardware and software companies work together so closely.

I could go on about the list of accelerated features we were able to see and take advantage of, but AMD already has all that info laid out elsewhere. What I can tell you is that whether it’s adding real-time effects to 4K footage, playing back multiple streams of typically tough formats like RED 4K footage, doing real-time color correction or outputting all the various formats that our clients request, AMD FirePro™ professional graphics provided us with some noticeable gains.

We didn’t hesitate to put the hardware right into action. When we were trying these systems out we had a couple big client projects in house with tight deadlines that we absolutely had to turn around. These were spots that included 3-D stuff and complicated layered motion graphics along with some heavily effected footage. Thankfully, we were able to see an increase in render speeds and that allowed us to creatively experiment with a few different versions as well as turn those projects around faster. We were able to execute a vision that probably wouldn’t have happened if it weren’t for the hardware we were using, and the client was very pleased with the final.

One of the best things about the whole process was that we really didn’t see an impact on our workflow. Almost all the software we use works and looks the same on both Mac and PC, and that alone should ease the concerns of anyone who can’t get their head around using anything but a Mac. Adobe, Avid and Cinema4D all have interfaces that are nearly identical on both platforms so an editor or graphic artist can jump on any machine and not really notice a difference.

It’s something that needs to be mentioned, as even PVC’s own Scott Simmons has said that he’s spent his life using Macs and has never purchased a modern PC for his own use. Scott obviously has an open mind around such things, but not too long ago there was a vocal segment of the community that didn’t. Fortunately, that sort of mindset is becoming much less prevalent, because it really doesn’t benefit anyone to think there’s only one way to get things done. Especially in an industry that’s constantly changing.

If you’re close-minded about using different operating systems, you run the risk of not being able to take advantage of countless work opportunities. If I’m looking to hire an editor, whether full-time, part-time, or freelance, they need to be willing to work on the system that we have available. Narrow thinking around hardware can also cause you to miss out on certain feature sets that are offered on only one of those platforms.

For example, let’s look at expandability. We’re probably always going to be using Macs in one way or another, but the current high end Mac is not really internally expandable in terms of graphics cards, RAM and SSDs. With our Dell workstations we can swap out graphics cards, RAM or hard drives in seconds. We’re constantly upgrading our RAM, hard drives and graphics cards to have the fastest and most feature-rich capabilities we can.

Having that kind of flexibility can really be a difference maker. I can say that because I’ve seen so many professionals use outdated hardware or software to the detriment of their project just because they’re familiar with those products and processes. The unwillingness to look at new solutions to increase their capabilities, much less their revenue, can keep them from providing the best possible product to their clients. So much of our job is about increasing the quality of our edits and graphics and getting our job done as fast possible so we can take on more work in the same amount time. Getting stuck with a single approach or system works directly against those goals.

Being open to alternatives is the reason we tried out these pieces of hardware, and it’s the reason we decided we had to have these systems installed permanently. In addition to our MacPros, we’ve added Dell workstations to our workflow. We ended up putting the AMD FirePro W9100 graphics cards in our new PCs because of the gains we saw. We noticed right off the bat that it was simple to set up the machines and add the extra peripherals to customize them to our needs. Dropping in RAM, SSD hard drives, and the AMD FirePro graphics cards took no time at all. The transition was a nonissue. Boot the machine up and jump right into it.

Where do we see these results? The real-time benefits in the editing and color correction process have been apparent to everyone. After Effects is a huge part of what we do and the integration of all the Adobe products makes our workflow so much smoother and more efficient. A job that might have taken 12 to 14 hours to render even just last year now might take 8 to 10, or even less. 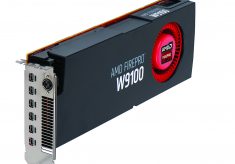 The AMD FirePro W9100 professional graphics cards and Dell Precision 7910 workstation were obviously a great fit for us, but one of the most important things to consider in this environment of change is that such modifications can be guided and customized to work in the way that’s going to be most effective for you. If you’re considering buying new hardware, you need to look at the gains to be had in implementing that hardware in your post-production environment. Will those gains provide enough of a benefit for you and the work you’re creating?

For us, the speed gains we saw in our editing and graphics work were large enough to justify the cost of putting Dell machines with the AMD FirePro graphics cards in our bays. Our clients are super happy with the quality of our work and the faster delivery times. Our artists love the acceleration of many of the features they use all day long. And as a business owner, I’m thrilled about being able to do more work in the same amount of time as before.

Whether or not you’ll have the same experience with these systems depends on your current setup and the sort of work you’re doing. Regardless of the details I can tell you one thing for certain: if you aren’t actively asking yourself these kinds of questions, you’re going to lose clients and projects to people who are.

And that’s regardless of how many cheese puffs are in your break room at any given time.

3rd Party Opinions After Effects was first released in 1993, and since then it’s established a healthy ecosystem of...

By 2014 After Effects was roughly 21 years old.  The list of improvements and new features added since the...

For many users, the topic of performance comes down to the question of “which component should I buy”, or...