The folks at Elgato dropped a big product announcement day with the Stream Deck +, which adds dials and new functionality to Stream Deck. Imagine an 8 button Stream Deck with 4 dials at the bottom and an LCD strip that changes based on what you want the dials to do and you’ve got an idea of the $200 Stream Deck +. This might be the ultimate hardware control surface for video editing that brings together the tactile buttons with a tiny screen, pressable dials that can control many editing and post-production functions and a touch sensitive strip to complement those dials. This seems like a near-perfect hardware control surface. Don’t believe me? Look at the trailer.

Many of us have used the original Stream Deck for years in various button sizes because it comes in various button sizes. The 15 button Stream Deck seems to be the most popular but colorists love to use the Stream Deck XL. While I do love my Stream Deck I love the Loupdeck CT a lot more as the dials are quite literally a revolution, IMHO when it comes to video editing control surfaces. Elgato produces great hardware so I can’t wait to get my hands on the Stream Deck + and see how those dials feel. This is a USB device so it isn’t wireless and the manual says you have to hook it directly to a USB port and “do not use a USB hub.” That’s a bummer.

While a lot of the Stream Deck + webpage is dedicated to talking about studio and streaming control I can assume the Stream Deck software is going to have some great post-production app support. Check out this image: 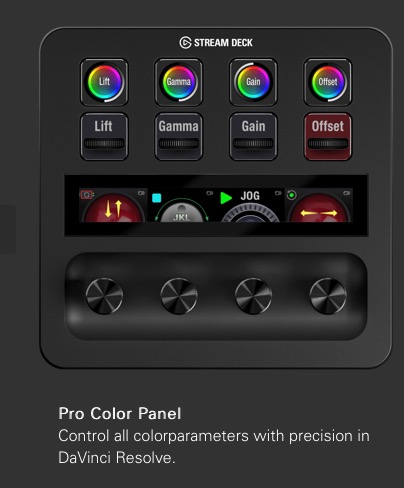 That’s pretty exciting considering how difficult it is to control Resolve with third-party hardware.

And here’s a bit of Final Cut Pro control in a gif:

We've also added a Dial Hotkey for launch – letting you assign any hotkeys to your dials/LCD Touch Strip so you can use SD+ with your favorite apps while we continue to build out our direct integrations.

I love using my SD+ to control my Final Cut software. pic.twitter.com/ilTIR2vJnt

At $200 the Stream Deck + isn’t a super cheap surface but it does come in below both the Loupedeck CT and Loupdeck Live. No doubt Elgato has some better options for pricing and margins than the smaller Loupedeck company. The Tourbox on the other hand is $170 but doesn’t offer the screen and is really a different philosophy entirely when it comes to control surfaces. And it looks like the Stream Deck + will offer some customization options.

Also I'm sure people will ask because of images on our site with them:

What other colors would you like to see? pic.twitter.com/hZwIHv5TPm

I can’t wait to get my hands on this thing. Sideshow FX already has icon packs ready for it including DaVinci Resolve so it feels like the Resolve integration will be quite deep. First think I wonder is if we’ll eventually get a Stream Deck + XL!

I’ve got my order in!