Shooting tethered was, once, an option for big studios, but modern technology means almost anyone can shoot tethered, anywhere. Software and hardware solutions make it easy to use. 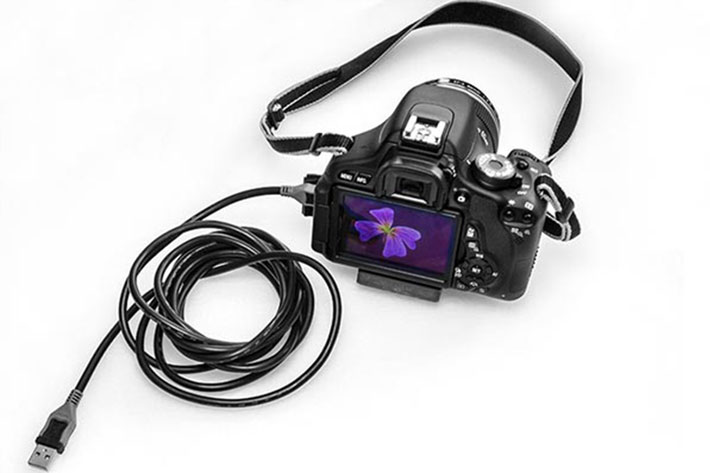 A cable connecting your camera to your computer is all you need to shoot tethered. It may be the start of an experience that will give you better control of your photography, indoors but also outdoors.

Not so long ago, in fact less than a decade, shooting tethered was something that most people would not dare to try.  The software existed, but not with as many choices as we’ve today. Adobe Lightroom, for example, only introduced tethered shooting in version 3, from 2012, and while there was software for both Mac and Windows, as Aperture or Capture One Pro, besides some less known solutions, it wasn’t something people would add to their workflow. Nikon did not help much, as their solution with 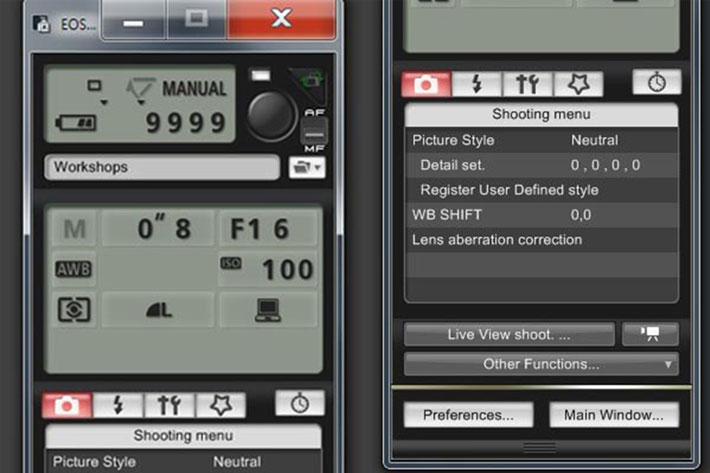 tethered shooting, Nikon Camera Control Pro 2, had a price close to $150, then.

Canon did contribute  to the dissemination of tethering as a shooting option for many users, through the free distribution of its EOS Utility, which continues, to this day, as far as I know, to offer a clean control interface to shoot tethered with Canon cameras. But what was once and option only available with some software has become the norm, at least for many of the popular apps, and that has helped users to discover the enhanced control photographer’s have over their images when shooting tethered. 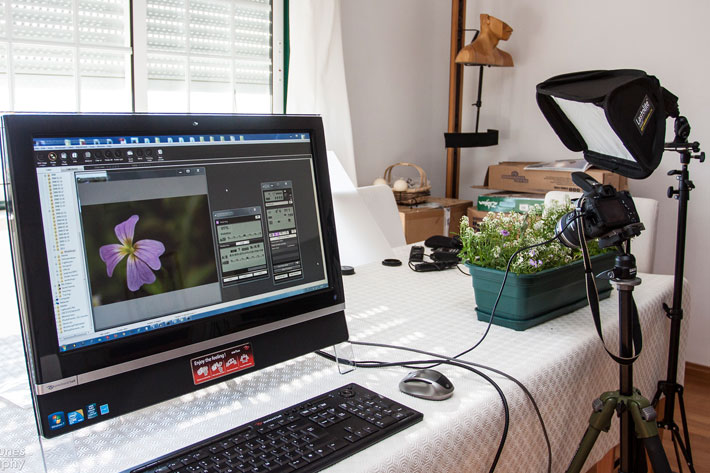 The magic of one USB cable

Shooting tethered continues to be an option, even in these modern days when wireless offers its magic. In fact, some of the modern “tethered” solutions use wireless too. Before we look at what’s available, though, let’s look at the reasons to shoot tethered. Or the key reason, from which all other derive: users are able to see the image just shot on a computer screen, with a size that helps to define which adjustments need to be made. I’ve used tethered shooting, for example, for macros of flowers, as it allows focus to be adjusted and gives you a better understanding of how a photo is going to look, the separation between foreground and background, with a scale users never get in the camera’s small LCD.

A USB cable and the right software to use in your computer are all you need to start shooting tethered. As I wrote above, many of the apps available today have some form of tethered shooting. Early this year, in my review of the new CyberLink PhotoDirector 10, I mentioned the fact that this version included tethered shooting.  It’s a welcome addition to a program that now offers multiple options for photographers of all levels. 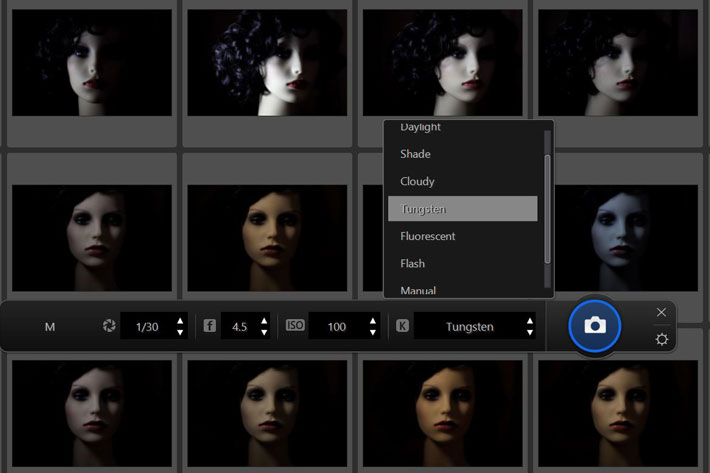 The tethered shooting in PhotoDirector 10 is, as expected, very simple to use: you connect your camera to the PC, launch the app, click on Library, then on the import button at the bottom of the panel, and select Tethered Shooting. In the Tethered Shooting Settings window, users need to specify the shooting preferences ( destination folder, file naming, photo tag, etc.) if required., and click OK to save the settings.

After having followed the steps above, you’re ready to continue; now, each time one image is captured, it appears on your computer’s screen. During the operation, the tethered shooting bar will display on the screen. If required you can adjust your camera’s shutter speed, aperture value, ISO setting, and color temperature while you shoot. That’s it!

PhotoDirector 10 now supports tethered shooting for Canon and Nikon cameras. CyberLink says that even if a camera is not on the list the company published on its website, it may still be compatible with PhotoDirector 10, so those interested should  download the free trial of the app to test whether it is supported. 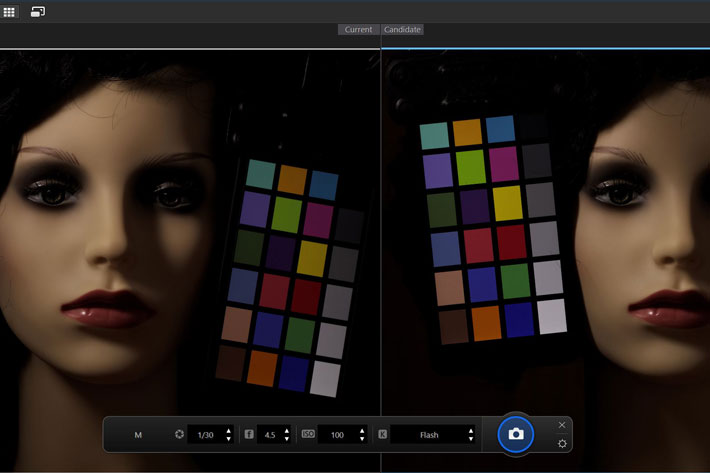 The advantage of using PhotoDirector 10 is that the tethered shooting feature is part of the whole program, meaning you can start editing images right away without having to change apps. That’s something to consider if you’re interested in having one app that does it all. But there are other options, some of which have been mentioned here at ProVideo Coalition before. Smart Shooter 4 Pro, available for Canon and Nikon, is a good example of a complete solution for those who want to control every aspect of their tethered shooting.

The app comes in two versions, both for a single user, but with different options and prices. The base version, Smart Shooter 4, which costs, $69.95, can be used with one camera and offers tethered shooting, remote control, live view and prepackaged scripts. The Smart Shooter 4 Pro has the functions from the base version, but offers multi-camera control, barcode scanning, accepts external API and allows user to create their own scripts. Priced at $195.95, it also allows users to use it with up to 8 cameras. 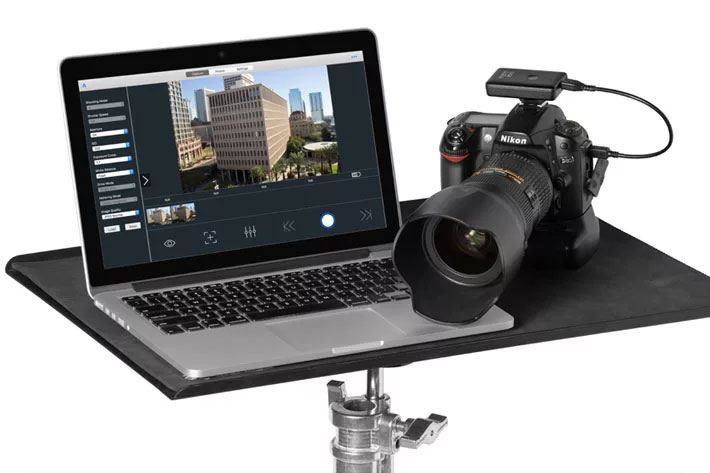 A lot has changed in the universe of tethered shooting since the early days, and companies like Tether Tools have contributed to make life easier for whoever needs to shoot tethered. In fact, even the definition of the word tethered has changed, from the original idea of “a rope, chain, or the like, by which an animal is fastened to a fixed object so as to limit its range of movement” to one that also accepts wireless connections between smartphones and computers. One example is the Case Air Wireless Tethering System from Tether Tools, which connects and transfers images instantly from your camera to a phone, tablet or computer.

While many will think of tethered shooting as something to do indoors, the solutions now available make it easy to shoot tethered anywhere, indoors and outdoors. Tether Tools, again, has some of the solutions that can be adapted to the needs of different users, both in terms of connections and power sources to keep everything running anywhere you need to set up a studio. 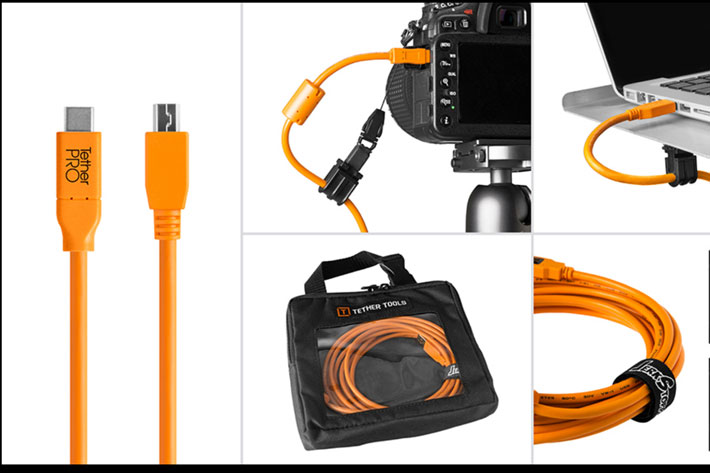 A good starting point, though, is a “starter kit”. While you can buy an USB cable and you’re almost done, the “Starter Tethering Kit” from Tether Tools will help you seamlessly transition into a tethered workflow and provides the basics you need to get started. Starting at $ 84.55, it comes with everything you need to start your adventure. If you do not have already the software needed for tethered shooting, Tether Tools even has a list of the most popular options available, as well as guides to help you get the most out of the experience.