The RH1 is more about the future than the present

I remember playing with a couple of the RED One cameras and dealing with the myriads of issues when that camera was still in its infancy. I also remember only having marginal success with sorting through such issues. Despite those challenges, it was obvious the camera represented a real game-changer for the industry. It’s part of that reason that when Jim Jannard announced that RED would be putting some of their latest camera tech into a smartphone to create a more mobile acquisition and delivery system, I was interested. I certainly wasn’t the only person that was anxious to learn more about the RED Hydrogen One (RH1) as soon as more details about it started to emerge.

That interest wasn’t just about the potential of this new system, as I was also intrigued about the Hydrogen One as a device, as well as some of the technologies projected as part of the announced development path. I even choose to do an NAB2018 Post Production World session about the Hydrogen One to share what I thought were some of the most intriguing of the developmental ideas available in the patent documents. A month later, I flew out to RED’s LA Studio’s for the official “launch” event in May of this year. I was able to see working units, talk to people I know on the teams and learn even more about the device.

With many others, I learned of issues pushing the delivery date once again, which brought the product closer to Kickstarter disaster territory than anyone wanted to admit. In a society driven by never-ending news cycles, Amazon same day delivery and an aberrant need to feed social media, that’s not a comparison you want anyone even thinking about, but that’s where my mind went as we got well past the 1 year anniversary of my July 2017 purchase. Thankfully, and at long last, my RH1 arrived on October 30th. That delay along with the legibility of Jim’s signature on the note included in my box was a small hint at the long road it took to get here.

I’m an iPhoneX user, and Android has always been little more than an annoyance for me. It’s the reason I no longer use a Kindle. That’s part of the reason I kept the RH1 as a separate device, without uploading my contacts or data despite the ongoing battle with Google’s software intrusion. I also did what I always do with any technology product: I updated it immediately after it came out of the box. I found out later, my persnickety tech habit actually made my experience more enjoyable than if I had opened the box and immediately started shooting.

First off, at 9.3oz the RH1 is substantial, nearly 18% larger than my iPhoneX and 3.5oz heavier. The knurled texture and scalloped edge give a tactical feel, even with gloves on. Equipped with a 5.7in, 2560x1440px Leia enabled 8bit, glasses-less 3D display with the rear cameras max resolution of 12.3mp at 4056×3040, it’s a serious capture device. That’s in addition to the front-facing cameras that deliver 3840×2160 in an 8.3mp sized image using the Side by Side positioning of the cameras to create stereoscopic imagery.

The cameras takes a decent image in both 2D and 3D. I initially found the camera settings to look as if they had a low contrast curve on, with low color saturation and jarringly flat, but quickly changed the default settings to achieve a more dynamic look. The camera functions well in low light, has a pretty standard cell phone style image quality with a dedicated shutter button like a camera.

Sadly, the phone is as dated as the first builds of the camera software. Nonetheless, I am undaunted, buoyed by some of the small things that stand out. The A3D audio is nothing short of stunning with the right content and headphones, but like with the default images, adjustments are necessary to get the most out of your device.

I’m a big proponent of 3D, having worked on a number of 3D projects, and I like the technology. It’s why the notion of owning a functional, glasses-free 3D viewer was intriguing.  Leia’s display tech overlays the 3D on top of a conventional LCD screen, using prismatic lenses positioned around each pixel, re-directing the angle from which the viewer sees. The image is varied between each eye, the separation giving the appearance of stereoscopic to the brain.

This might be the most exciting aspect of the RH1. While there can be some Nishika or Lenticular look to the early displays and imagery, I expect the tech to advance fairly quickly now that practical applications are being demonstrated. There are 3D movies and game available in the h4V format, albeit a bit pricier than conventional films.

One thing to note here is that there is a physical limitation of the stereo imagery based on the camera positioning on the front and the rear of the device. The H4V branded images can only be achieved with the cameras are shooting in an SbS config, meaning you can shoot selfies in portrait mode on the front facing cameras but it will be landscape mode when shooting normally.

The system is simple and easy to use, to the point that everyone I have shown it to finds the 3D intriguing, but gimmicky. Getting convergence controls would be helpful, as would some ability to output the content to conventional 3D displays. That was something I spent a few hours trying to accomplish. Luckily, most common USBc dongles work for I/O. I was able to use adaptors from Apple, Lintes, and StarTech to connect via HDMI, but I never got the 3D to playback correctly. That’s mainly because of an I/O bug, that I’m told that will be fixed in an upcoming release.

My RH1 also had two software updates in my first week. I expect the software to update more rapidly now that the devices are available to the public via conventional cell phone outlets. Despite these issues, there was and is still plenty to keep my attention.

The DSLR has moved modern cinema as much as RED has, each pushing their own extremes. The RH1 is still developing the add-on modularity that will show how much we have learned from the evolution of the DSLR. Only then, when we fully understand the power of adding additional processing or imaging capabilities for an as-needed basis, will we be able to really understand where filmmaking is going.

Ultimately, the RH1 is about what the future holds. It’s a future where your multi-sim phone maintains a bonded uplink to by being able to add power and storage modules so that you can still receive critical info or maintain communication in the midst of an area ravaged by famine, war or natural disaster. It’s a future where devices have the ability to power a live broadcast, playing back footage captured and edited, and then deliver that as live news with a quality unequaled by any other mobile delivery systems. The RH1 is a look at how media and entertainment will be created and delivered in the coming decades.

Without any of the proposed add-on modules or secondary accessories yet available to the public, the challenge with reviewing the RH1 is that this future hasn’t arrived yet. As with the system, the still and video file type are severely limited by a lack of supporting applications at this time. There are discussions about plugins for video editing in Adobe Premiere and multiple workarounds for editing stills, but right now, working with the media files is convoluted and cumbersome, to say the least.

I don’t disagree with the multiple reviews that say the RED Hydrogen One is little more than an average cell phone straight out of the box, but I didn’t buy mine to be a cell phone. I’ve always seen it as something that allows me to see into the future, and I can now say that I’ve literally held that future in my hands. That said, doing so has made me wonder how many iterations of the Hydrogen One will have to go through my hands until that future arrives, and I can see the fully resolved vision of a mobile media machine. 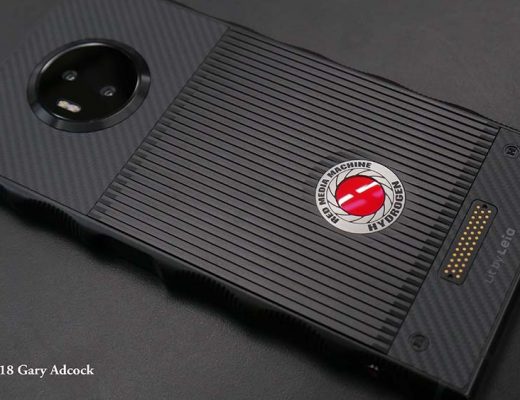