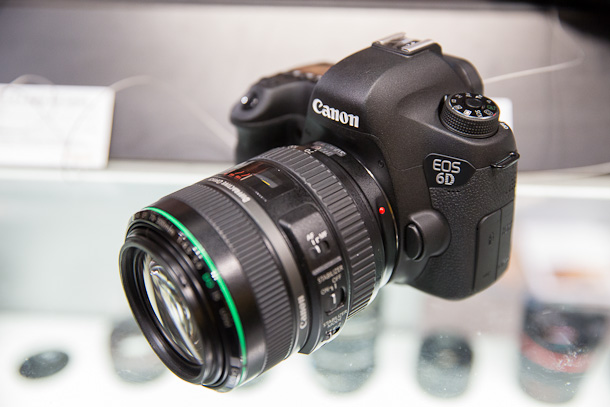 Here at PhotoPlus Expo I was able to get my first hands on time with Canon's latest full frame DSLR, the EOS-6D which was officially launched a few weeks ago at Photokina.{C}

The race to provide consumers with more affordable full frame cameras began in earnest this autumn with Canon, Nikon and Sony all launching moderately priced options. Sensor production technologies have cheapened and it's finally time for manufacturers to pass that saving onto the consumer and likely begin the slow process of phasing out cropped sensors, a feature that was merely a necessity in times when the sensor itself was 95% of the production cost of a DSLR. The smaller area of an APS-C sensor was a simple necessity to bring digital SLRs into a consumer friendly price point.

Here at PhotoPlus Expo I was able to spend some time with the Canon EOS-6D , the Nikon D600 and the Sony A99. In the hand the 6D seems fairly similar to its bigger brother, the 5D Mark III. Ergonomically its controls are very different but the overall size, weight and feel in the hand seemed very similar to me. The Nikon D600 on the other hand felt much smaller than a D800 and Nikon clearly spent time making a 'small' camera. The 6D looses the little thumb joystick from the 5D and instead replaces it with a new directional pad within the typical rotating dial. Coming from a 5D myself I felt like it was definitely a step down. My hands fell far easier on the 5Ds controls than the 6D. Having said that, if you're coming up from one of Canon's APS-C cameras like the 60D or the Rebel series then you'll likely appreciate the new layout. 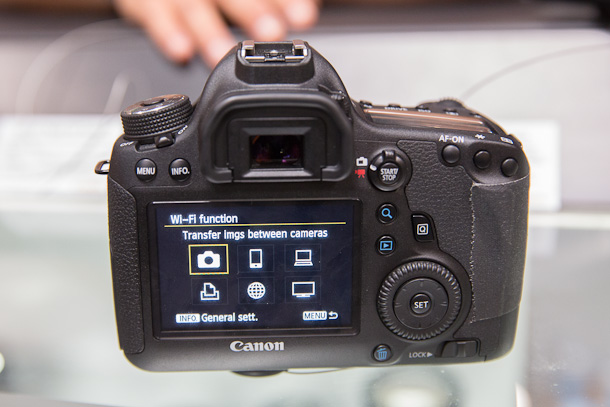 On the plus side though, the mostly pointless buttons have been removed from the left side of the LCD which gives a much cleaner appearance to the back of the camera, similar to the EOS-60D. In fact overall, unless you look closely for the lack of built-in flash, it's hard to discern the camera from a 60D and many people were mistakenly grabbing the 60D next to me thinking it was the 6D.

Build quality seems to be very nice though, impressive in fact. I was expecting it to feel considerably less solid than the 5D Mark III but in actual fact, whilst it's noticeable, I don't think it would knock my confidence in it's durability. It's definitely a step up from the 7D and two steps up from a 60D.

Two standout features of the 6D are the built in GPS and WiFi. I have to say that I remain a little skeptical about the GPS. I love that they have finally included it, don't get me wrong, but there have been several worrying reports of extremely poor accuracy with Canon's external GS units and by Canon's own admission, this built in system will be even less accurate. It'll work great for sorting holiday snaps by country or town visited but we'll have to wait and see if it can provide enough accuracy to truly determine exact shooting location. On the WiFi side of things I delved into the menu that can be seen on the back of the camera in the above image. An impressive selection of options appeared that allowed direct connection to a smart phone, a computer, another camera (which I wasn't previously aware of), an internet server and a printer. For studio usage I think this is really going to be a great feature and I'm pleased to see that the options seem to have been greatly simplified from previous WiFi adapters that I have used. Unfortunately on the pre-production version the WiFi was not functioning so I could not test the connection speeds though the implementation of it all looked to be very good and will open up a world of possibilities. Whilst WiFi adapters have been available for Canon's pro cameras for some time, the prohibitive price of the adapter has kept them out of many peoples hands. I'm convinced that we'll begin to see some very innovative uses of this exciting new technology now that it will begin to get into the hands of many more people.

There were some concerns that the AF system on the 6D was near identical to the frankly poor system on the old 5D Mark II. At the launch, Canon claimed that in fact it had some clever new technology for low light AF and on the dim show-floor lighting I can confirm that it seems to be pretty good. I deliberately used a lens that I know to be far from fast at focusing, with a small aperture, and it was able to focus very quickly indeed. Color me impressed on that aspect so far and as a previous owner of a 5D Mark II I can already tell you that the 6D AF system is much better than that. The only disappointment obvious on first inspection is the relatively tight cluster of the AF points near the center of the frame. For most subjects a focus-recompose technique is often best anyway but for tracking subjects it adds an element of annoyance that they are so centered.

Overall impressions are pretty good though. People will continue to debate the inclusion of the WiFi and GPS Vs a better AF system, afterall you simply can't have everything at this price point, but it's an encouraging start to this segment of the market. I certainly wouldn't shy away from this camera as a backup for a pro either. For wedding shooters it makes an excellent second camera alongside a 5D I think.