Anton’s new lightweight li-ion batteries, coming in 150w and 90w flavors are aimed at the corner of the market that SWX and Blueshape currently inhabit

What are the Anton Bauer Dionic XT batteries? They’re batteries that I’d say are overall solid after going hands-on with them. Even though I didn’t get a chance to test them in an actual production environment, I was able to take them through the basics.

The Dionic XT series is Anton’s new lightweight li-ion batteries, coming in 150w and 90w flavors, seemingly aimed at the corner of the market that SWX and Blueshape currently inhabit. The batteries are average in size, made out of ABS, and are available in Gold and V-Mount (called the XT GM and XT VM versions, respectively). I use a Condor GPS Pouch to hold my batteries on a vest/belt, and they fit just fine. I was given the Gold Mount versions but as I don’t own anything that uses Gold Mount, I had to use the p-tap port for powering my camera. Luckily that’s how I normally use my cinema batteries, so this workflow didn’t give me any issues. Except for one.

The problem I ran into right off the bat, at no fault of Anton’s, was learning the hard way that p-tap cable heads come in varying sizes. Some are more rounded at the edges than others, some have thinner plastic, some are made more cheaply, who knows what all the differences can be. The point is not all p-tap connectors are made the same and it’s important to test your specific cables with your batteries before you shoot along with the rest of your rig. The easy answer here is to use a battery plate so that variable never changes for you, but as I didn’t have one (and didn’t expect this to be an issue) I was put in a tough spot as the cable I normally use didn’t fit. Luckily I had a cheap backup p-tap to Canon cable from Amazon that fit. So, while it has nothing to do with these batteries specifically, pro tip: test all your cable connections when you get new gear.

Once I figured all that out, I charged the batteries on the LP2 charger that Anton provided me. I was genuinely surprised at how fast they charged up, simultaneously, and the little LCD window on the side of each battery let me know at what percent they were at which is such a great feature and one I wish I had on my current cine batteries, which just have the five LED indicators. The display lights up and can be cycled between percent charge, estimated run time, and after a quick triple-tap, diagnostics.

As I didn’t immediately have access to a more power-hungry setup like a RED or similar, I did what I could with what I have in my arsenal. Using the p-tap port I plugged in my C100mkII, and using the XLR handle I powered a MHK416. Using the USB port I powered a DR-60DmkII with a Joly-modded Oktava 012 plugged into that. I also set the camera up so that the Sigma 18-35mm lens attached would constantly search for focus. I don’t know how much power that uses, but I assumed it would be something. So in total, a camera pulling 8.4V, an audio recorder, and two phantom powered microphones. 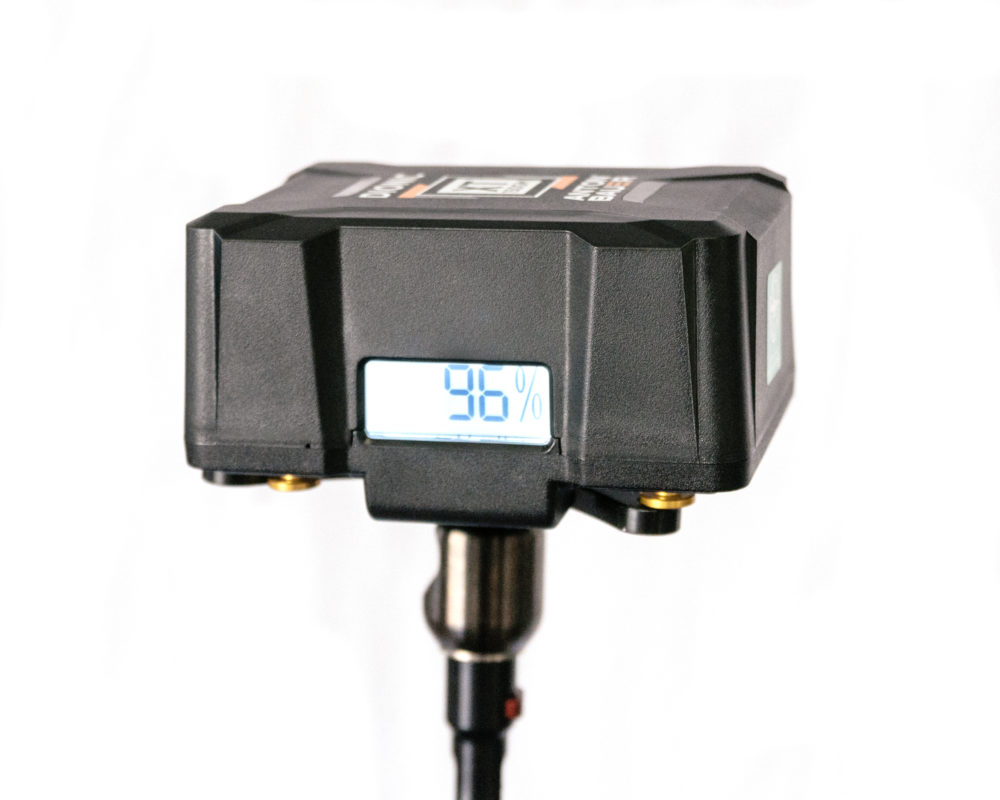 For both batteries, I ran that setup for an hour and kept an eye on the digital readout on the side. The reason I didn’t run it for the total length of the batteries charge is I saw the first test. The 150 said it would run for about 13 hours. After the hour had elapsed, at 96% I swapped it out to the 90 which hit 92% after 30 minutes, which I found interesting.

Another test I did was just to charge them to 100% and let them sit, and the 90 performed interestingly again in the sense that it lost 5% in 3 days. It lost another 2% by the end of the 4th day and held through the fifth. By contrast, the 150 lost 4% in the same amount of time, and they both settled out to 91% and 95% respectively after a full week of hard-earned sitting on my shelf. Obviously, if both are draining at the same rate the percentages would be different, but I was surprised by the result, to say the least. I suppose I naively expected them to stay at 100% or 99%, but as I mentioned I don’t have that handy readout on the side of the cine batteries that I personally own so I haven’t and couldn’t do a comparative test. I would be interested to see how each company’s offerings in this price range (or in general) stack up in this way.

Digging into the user manual I found the following information about how Anton charges their batteries, which might speak to my aforementioned concerns as I pulled them off the charger the second they each hit 100%. While the Dionic XT batteries can be charged on any standard charger, these stats are relevant only to their chargers:

Stage 1 will deliver a high rate charge matched to the capabilities of the battery (typically a one or two-hour rate, depending on battery type). During this stage, six separate cutoff methods are in operation, simultaneously, ensuring the fastest, safest charge for that battery.

Stage 2 charging is a BALANCING or “stabilizing” mode which calculates each battery pack type to offset any imbalance of the battery’s cells, created by unequal self-discharge or any capacity mismatch of the individual cells in the pack. This stage can vary in duration from zero to as much as 16 hours, depending on the condition of the battery. The Stage Two charge reduces current automatically as the battery charges maintaining the cells at a safe voltage level. A battery will typically leave Stage Two in 2-4 hours under average operating conditions.

Stage 3 charging is the Anton/Bauer exclusive Lifesaver maintenance mode. This patented pulse routine keeps batteries fully charged, free from self discharge – indefinitely – without damaging heat associated with a so-called “trickle charge”. The Stage Three programming monitors the self discharge of the battery, providing charge only when the battery self-discharges to about 95% of its capacity.

I was reflexively removing the batteries when they hit full charge as I’ve done that with all batteries as I wanted to avoid damaging them. Apparently, Anton has designed a charger that negates those issues and you can (and are encouraged to) leave them plugged in until you need them. That’s pretty cool.

If I was able to get my hands on these batteries again I would want to take them into the mountains and see how they fair in freezing conditions, as Anton has been saying they excel in adverse conditions in almost all of their copy. Maybe a trip through the desert would be worthwhile too. Luckily they’re completely “airplane compatible” so I won’t get held up in the security line, which has happened in the past. I often travel with my camera and only do so as a carry-on, so batteries certified for air travel are a necessity for me. I’ve also seen people literally hit these things with a baseball bat (half-power, admittedly) and drop them from head height on to concrete and the Dionic XT’s just shrug it off. Outstanding. 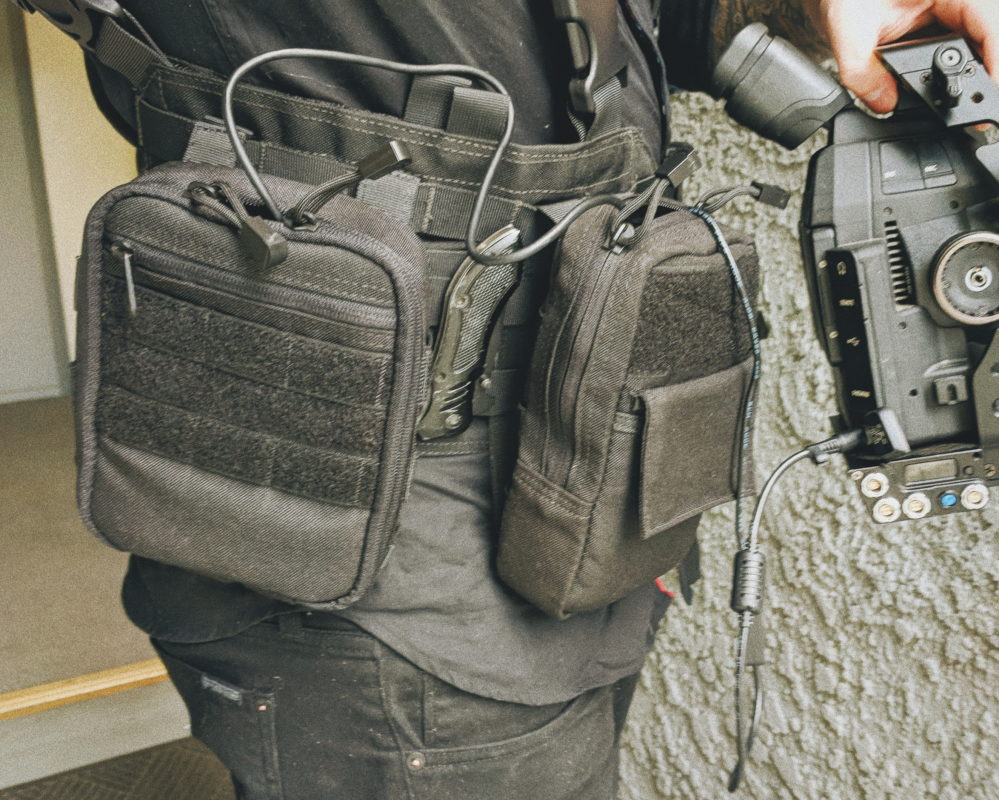 Here the Dionic 150XT is in a Condor GPS pouch, closest to the camera, powering it and charging my phone which is in the square pouch to the left.