Photos and video run through of Fujifilms latest retro star 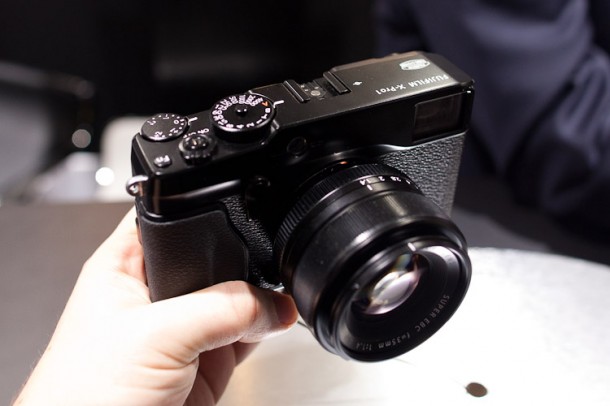 Here at CES Fujifilm launched what is set to be one of the hottest cameras of 2012, the X-Pro 1. All the specs and press release can be found on yesterdays posting but today I was able to get my hand on one for the first time. 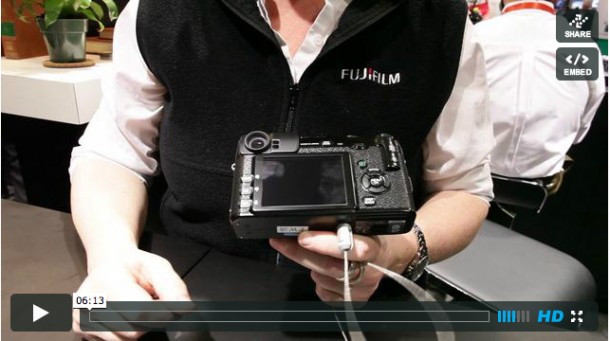 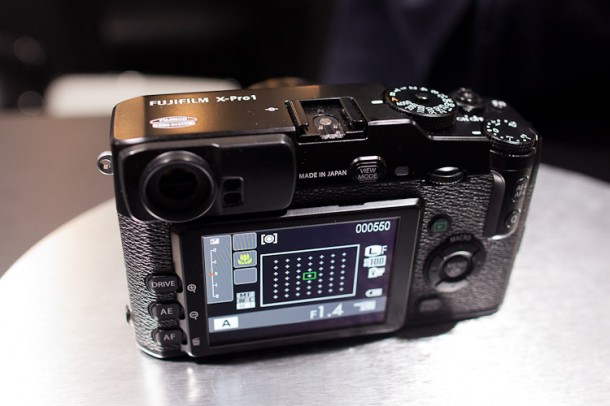 The button placement on the back of the camera is a huge improvement over the X100. The View Mode button now comfortably falls under your right thumb and the circular spinning menu wheel has been replaced by a far simpler 4-way pad. Where the X100 used to have a 2-way switch under the thumb is now a scroll wheel which handles the majority of function changes once accessed through the menu system. 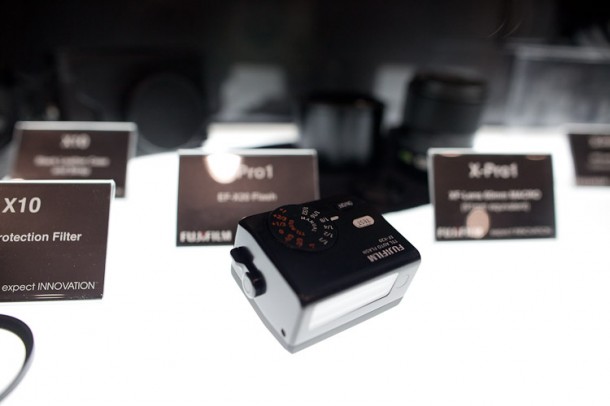 The Ef-X20 flash unit was locked up under glass so I didn't get a closer look at it but the design is even more retro than the camera is! 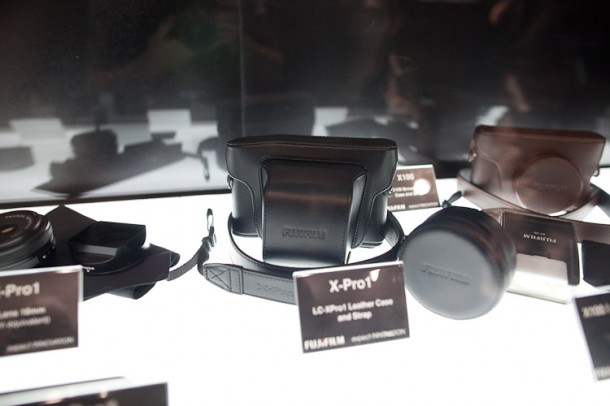 The X-Pro leather case is not compatible with the 60mm Macro lens and therefore presumably the eventual zoom lenses. It does work with the 35mm f1.4 though and provides a secondary lens case for the 18mm f2.0 as well. 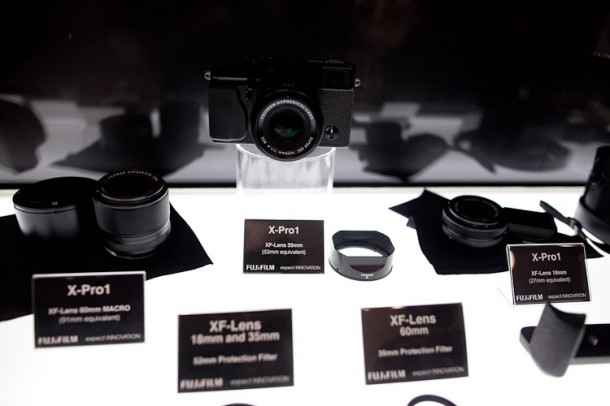 The majority of the system is still in development and all demo cameras were equipped with the 35mm f1.4. The 18mm and the 60mm macro can be seen under the glass in this photo, along with the metal lens hoods for all of them. Very Leica like lens hoods on the two wider lenses !

So now that I've had some time to play with the camera what are my thoughts ? Well the very first thing I commented on when I picked it up was the weight. It's actually nowhere near as heavy as it looks. Several other commented on this around me at the same time. It is physically quite a bit larger than the X100, but doesn't feel like it weighs much more. The body construction is solid enough but the 35mm lens didn't feel as heavy as I was expecting. 1/3 stop increments on the aperture is a nice addition but the focus-by-wire system still leaves a lot to be desired in my opinion. You just feel so disconnected from the camera when you use it in that way.

The hybrid viewfinder seems to be very similar to that of the X100, though this one also included automatic magnifications to adjust to different lenses. Resolution of the EVF appears to be identical to the X100 and I also experienced similar inaccuracies when focusing on closer objects using the OVF with hybrid display. I'm a bit disapointed they haven't found a great solution for this although this time you aren't even allowed to use the OVF in macro mode. Using EVF mode does solve the issue though and much like with my personal X100 I think this is how I would use the camera 90% of the time.

I experimented with the speed of the AF system as best I could in the booth and it seems to be considerably improved upon the X100's which was or still is the worst of any camera I've ever owned. Despite the obvious improvements though it still falls way shot of the AF speed and accuracy achieved by Sony in the NEX-7 and Panasonic with the GX1. The menu system is also a huge improvement. Not only do the menus physically flow smoother and faster but the addition of the 'Quick” menu button allows very easy access to all the important functions on one screen which can then be adjusted with the scroll wheel under the thumb.

Overall I don't think anyone can deny Fuji is onto another winner here, they would sell a boat load on the looks alone. We can't judge image quality just yet but they were displaying some incredible looking prints on the walls and a cursory glance at 100% magnification images on the camera's screen tells me they are certainly in the right ball park in both sharpness and ISO performance. Pricing is still something of an elephant in the room though. $1700 for the body put's it into a pro territory but it still seems to have a below average AF speed compared to cheaper alternatives from pretty much everyone else. If you can live with that shortcoming in favor of owning one of the best looking cameras on the market then judging by experiences with the X100 lead times you should probably be scrabbling to place a pre-order now!