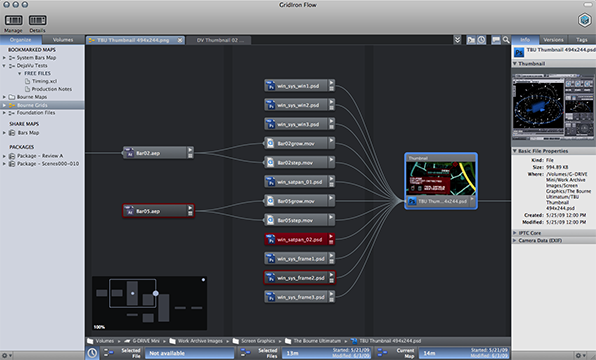 GridIron Software this morning announced on a conference call that Flow, the one-of-a-kind visual file management, workflow and time tracking tool that has been in development for three years, is now available for purchase or 30 day demo from the GridIron site.

In addition to a demonstration of how the software can be used to recover otherwise lost versions of graphics files, to discover the use of an element – including even a font – in a given file, or to track time spent on a project, Steve Forde, CEO of GridIron, brought on John Nack, Product Manager at Adobe, to show how Flow has been integrated directly into CS4 via Flash Panels.

A Flow icon was shown right in the tool bar of Photoshop, Illustrator and InDesign – and reportedly is available for all CS4 apps – that opens a Flash panel showing a miniature version of Flow and allowing capabilities such as coordinating fonts with a file from a different CS4 application that have never been possible.

Steve also announced a new feature added to Flow that did not appear in the public beta: the ability to see the same Flow map regardless of user or system. To support this, GridIron offers a multi-machine license, three systems for $100 more than the single system license.