Great conversation, awesome prizes, beer a plenty and all the gear you’ll ever need 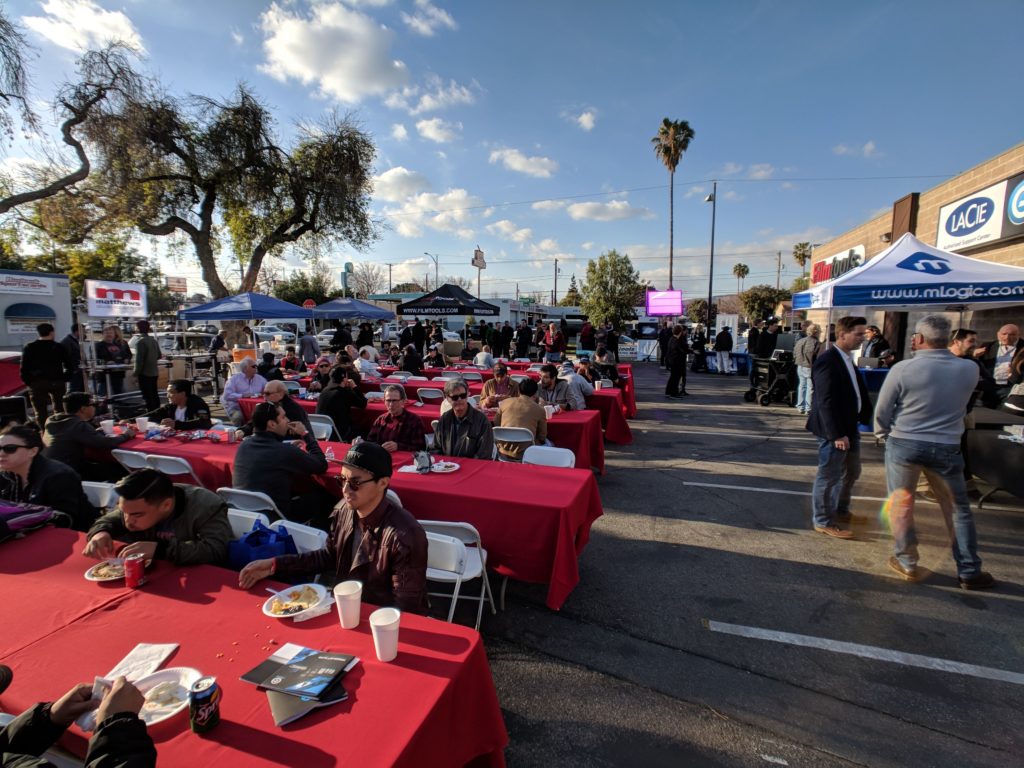 As the sun set on February, Filmtools brought together Arri, Matthews, mLogic/Codex, Atomos, and G-Technology to demo some of their newest gear and provide an intimate setting for people to talk to them about whatever came to mind. Industry professionals, solo shooters, enthusiasts and everyone in between came out to shoot the breeze and celebrate what it means to work and be part of productions of all sizes. 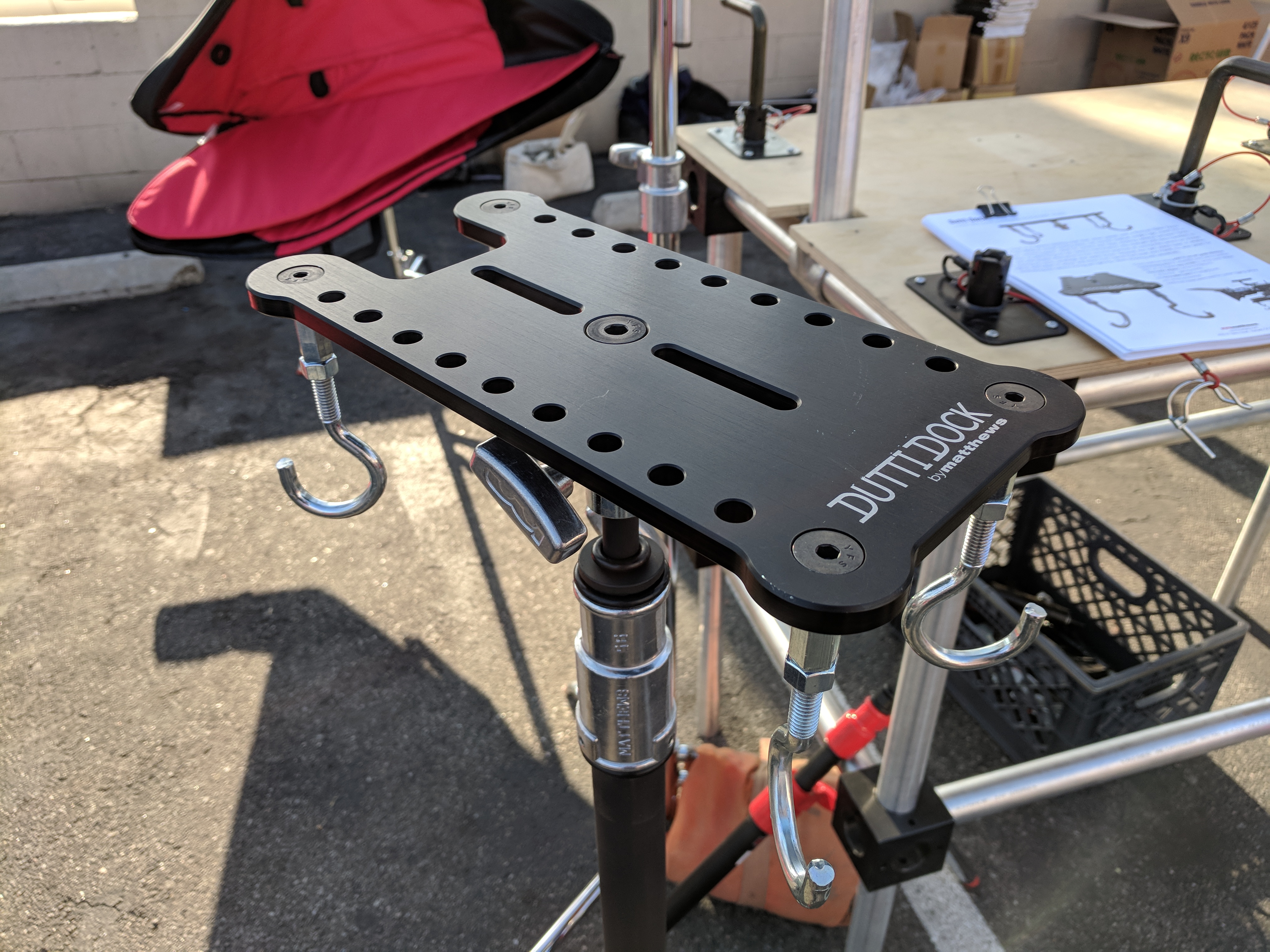 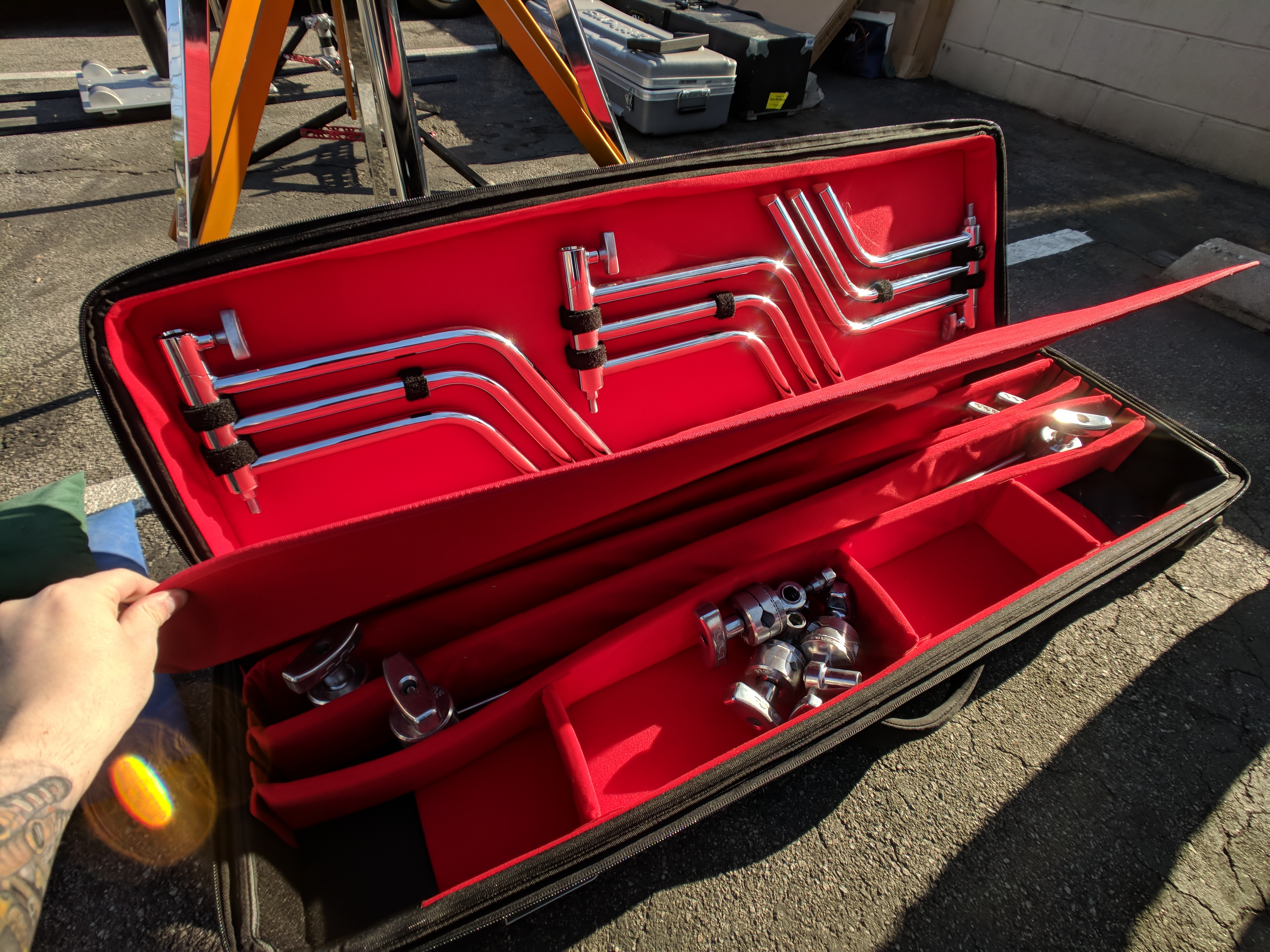 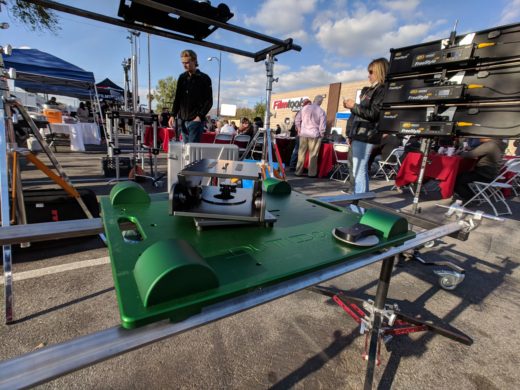 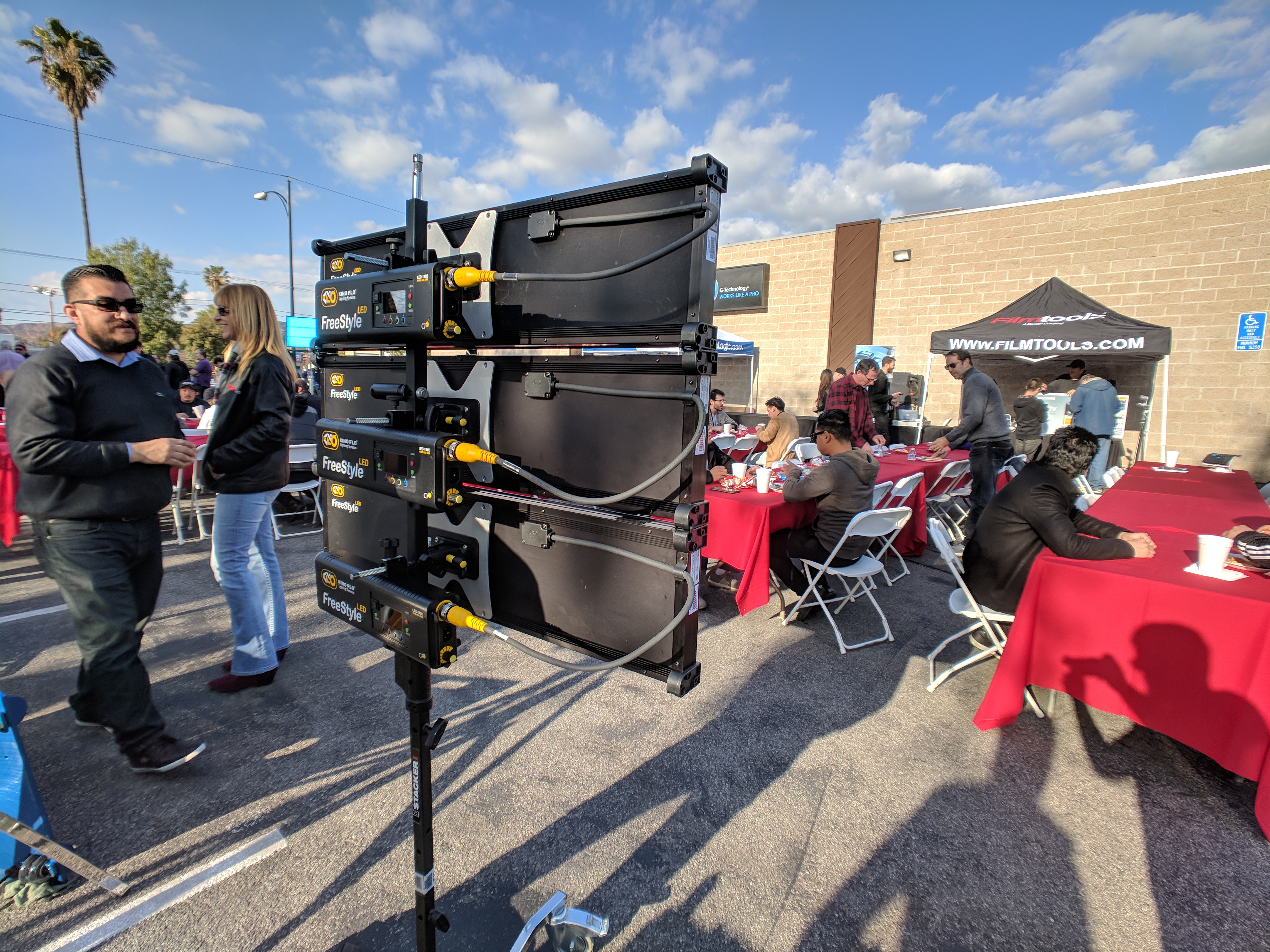 From Matthews, we saw the brand new K Stacker. Designed by Alex Amyot, the K Stacker holds 3 KinoFlo LED panels or two of their ubiquitous 4-Bank fluorescent fixtures. It can be hung in a grid or stacked to add even more fixtures, but primarily it’s used to put a large amount of light on a small, rollable package. In addition, they had their C-Stand bags on display, one of which is rollable like a snowboard/hockey goalie bag which, aside from helping you organize your grip heads and the like, makes transportation a snap. The top pocket fits a RoadRags kit as well, keeping everything nice and tidy.

The DuttiDock and MosesPole were also on display. The former being a compact place to rest cameras while swapping lenses or between takes which attaches simply to a light stand, the latter being a ⅝” Baby pin on a telescoping pole. The pole is ideal for resting a Steadicam or similar stabilizer between takes. It can also be used to prop up a sagging slider or you can give it to a bored-looking crewmember to “Hollywood” a light in what might be the lowest-footprint light stand ever created. 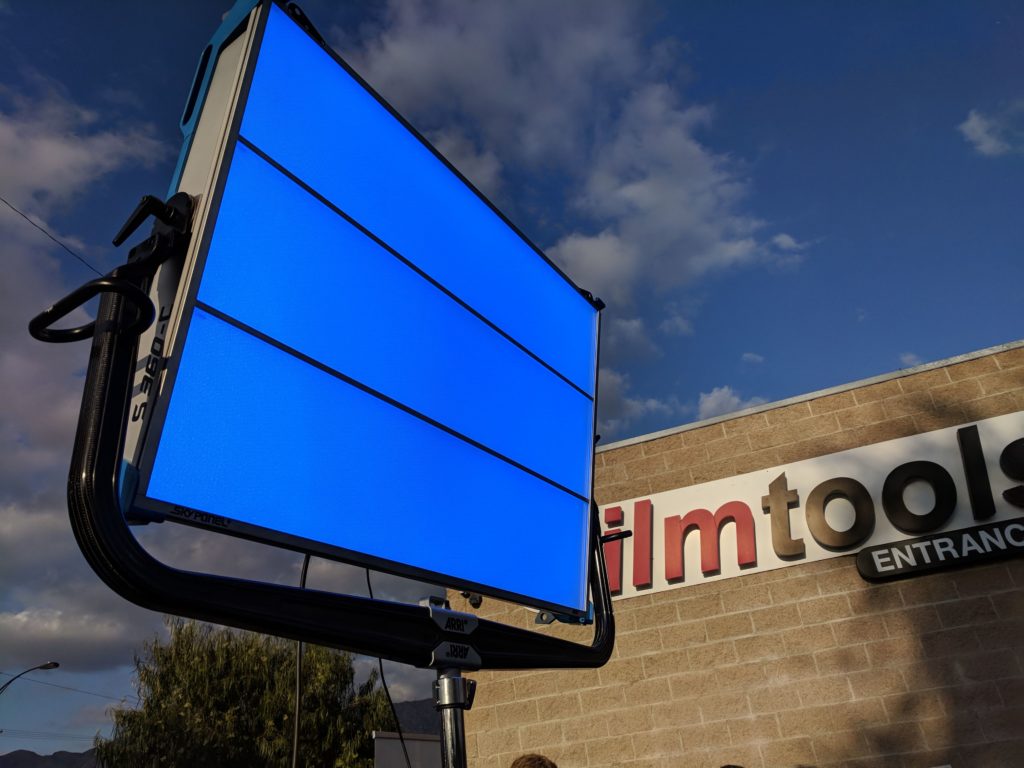 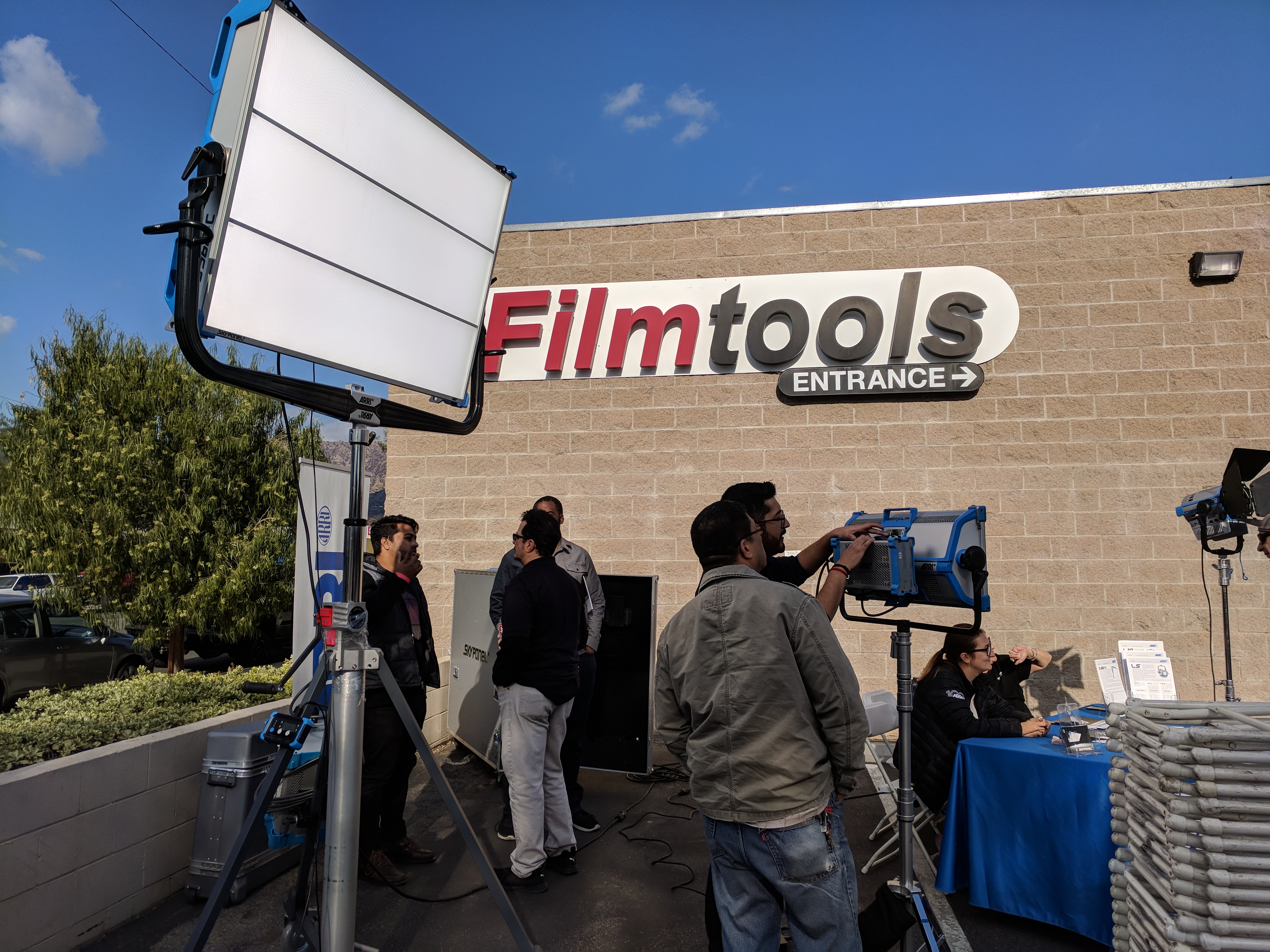 Arri gave everyone a special treat by demoing the brand new Skypanel S360-C, well before its slated debut at NAB in April. Almost six times bigger than the already-popular S60, the S360 is borderline solar. By the end of the event, its 120,000 lumen output was easily providing light for the entire parking lot, outpacing a traditional 12K tungsten spacelight and drawing only 1500 watts from the wall. Aside from its ludicrous output and buttery-soft light, and along with most of Arri’s LED offerings, the S360 can be programmed to replicate all of Lee and Rosco’s filters and almost anything in between. Like the other SkyPanel offerings, it has pre-programmed lighting effects like police lights, the flicker of a fire or television, the pulsing lights of a club, the brash flash of the paparazzi, or even fireworks. If you’re a fan of massive, soft light sources, you’d be hard pressed to find a better option these days. I’m excited to see how the competition reacts. 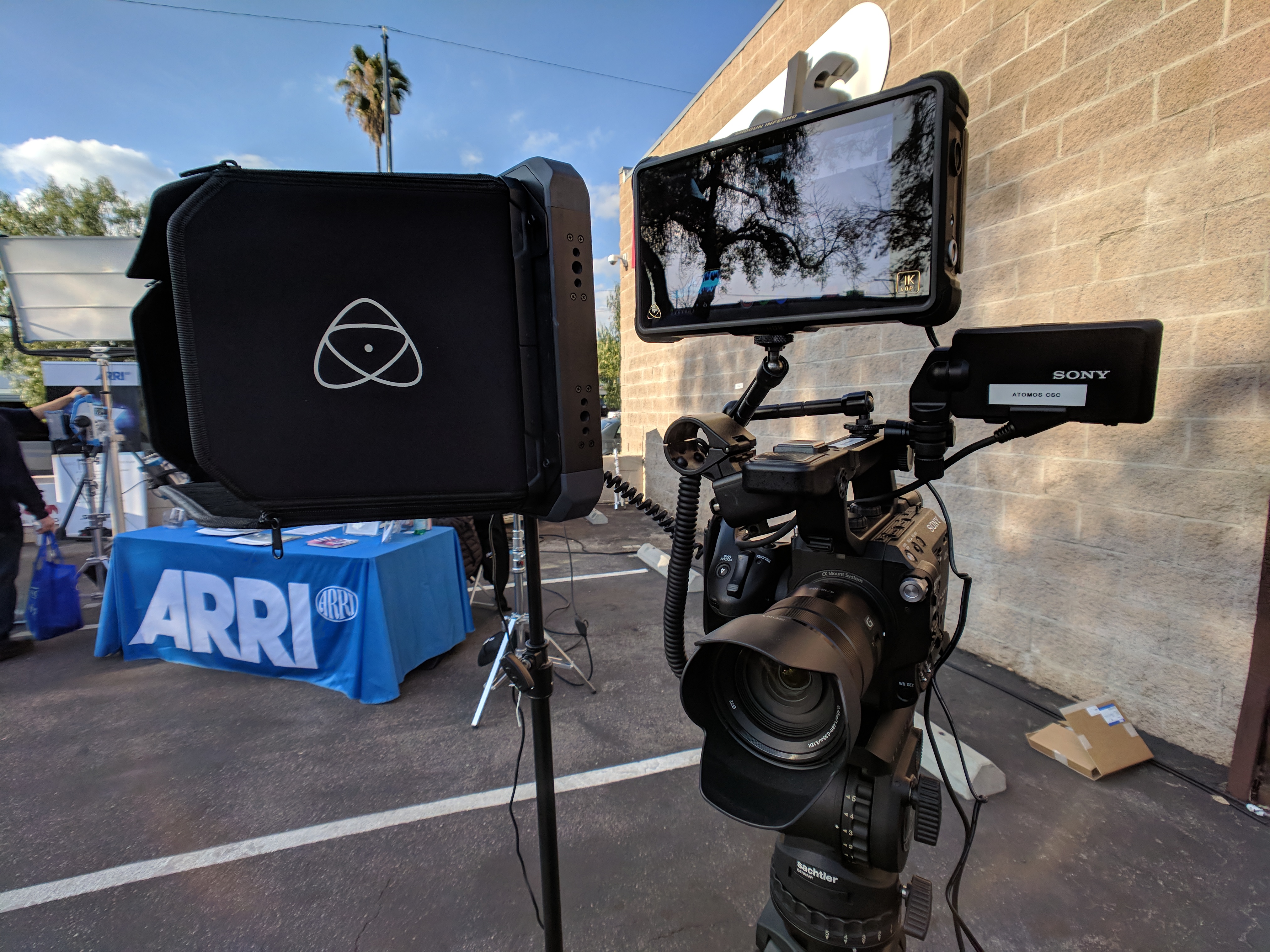 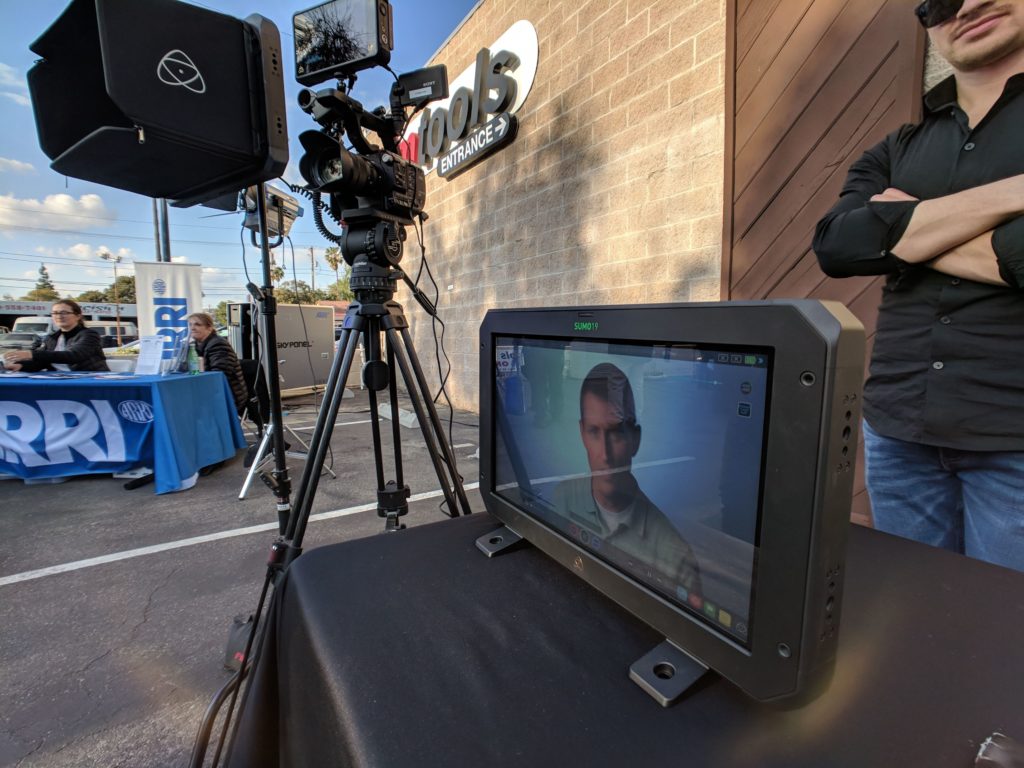 Aside from raffling off a Ninja Inferno, Atomos was showing off their Sumo M & Sumo 19. The difference being that the Sumo M is a monitor and the 19 has recording capability. The Sumo 19 is a 19” HDR monitor that can record 4K 12bit Raw and 10bit ProRes/DNxHR, and has 1080p60 live switching built in. As you can see in the photo, the screen is bright enough (minus the glare the camera seems to have enhanced) to power through daylight viewing without the need of a hood, although Atomos offers a very nice one to ensure a distraction-free viewing experience. I made a joke asking if they’d seen someone mounting it to a camera ala their Inferno or Flame series and wouldn’t ya know it, someone had. Not directly to the camera, but attached to an arm next to it. Y’all are wild.

As an aside, Atomos is offering $400 off the Sumo M and $500 off the Sumo 19 from March 1st to the 15th so if you’re interested in a massive studio-sized production monitor that can record dailies, proxies or 4Kp60 masters and has playback controls away from the camera team, there ya go. It also has all the usual features like false color, waveforms, and all that good stuff. Atomos continues to kill it.

mLogic and Codex got together to show off some slick LTO backups integrated into a cart, namely mLogic’s mTape and mRack systems. For those who don’t know, LTO is an extremely affordable backup solution with massive longevity and storage size with up to 12TB per cartridge and 300MB/s transfer rates with a 30 year shelf life. It may be 1990’s technology, but it has yet to be bested. The mTape is the drag-and-drop desktop version, with dual Thunderbolt 2 ports, and the mRack is the version that goes in your DIT cart. One version, the mRack can write to two LTO drives simultaneously while the mRack DIT version can support six HDD or SDDs on top of the LTO drive and four of those Thunderbolt 2 ports. A simple solution, but a requirement for productions that need to be sure that your footage doesn’t get lost.

GDrive was also in tow, giving everyone a look at their Mobile SSD which I’ve glowed about before, so I won’t go too deep into that (they’re amazing) but they also had their G Speed Shuttle XL RAID system on display which can either be configured with 8 drives or 6 and two EV slots to make your footage transfers from RED Mini Mags or CFast cards dead simple. The Shuttle XL can be easily transported, easily drive-swapped, and can hold up to 80TB in its 8 drive form with transfer speeds up to 1350MB/s. 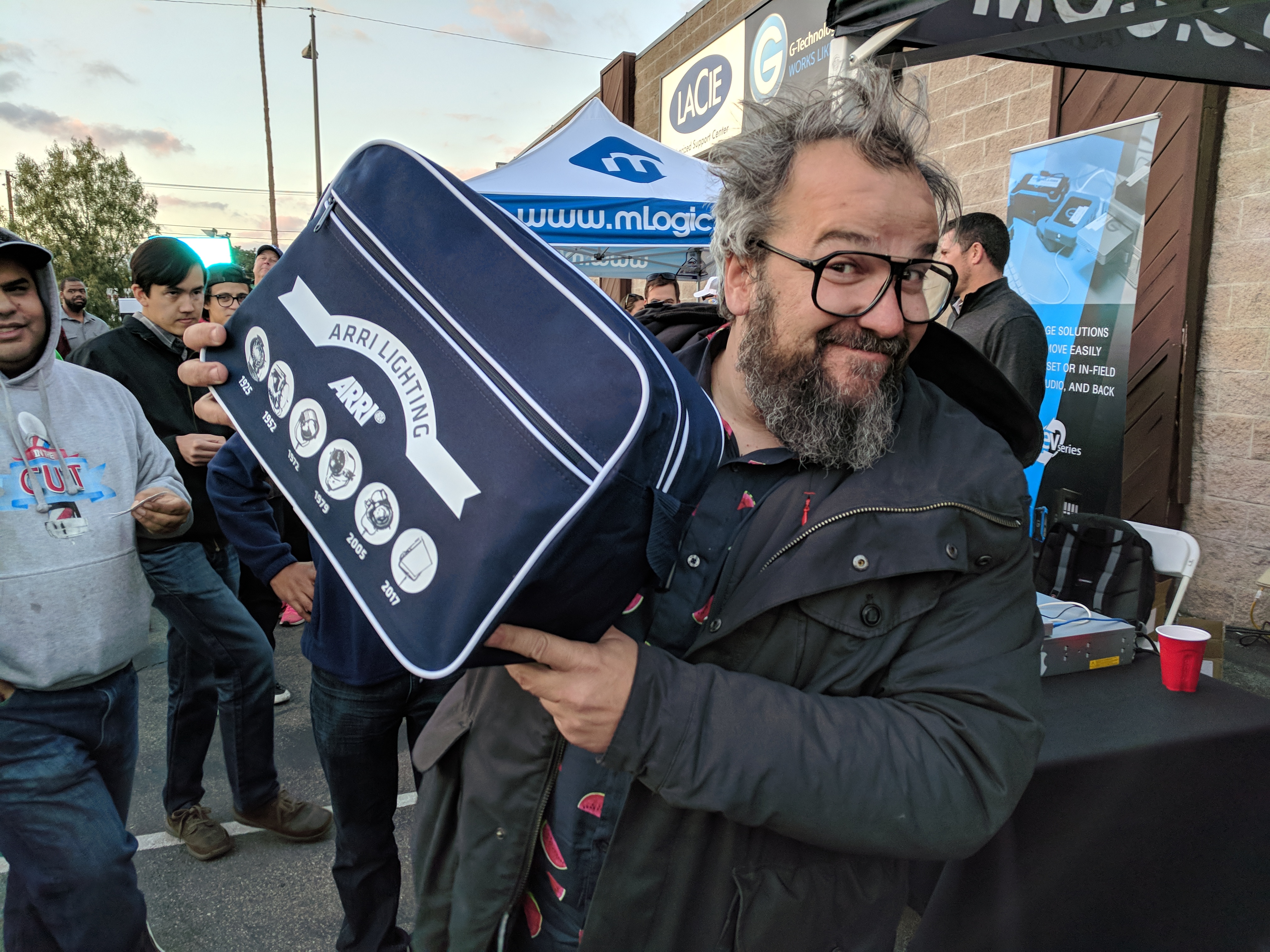 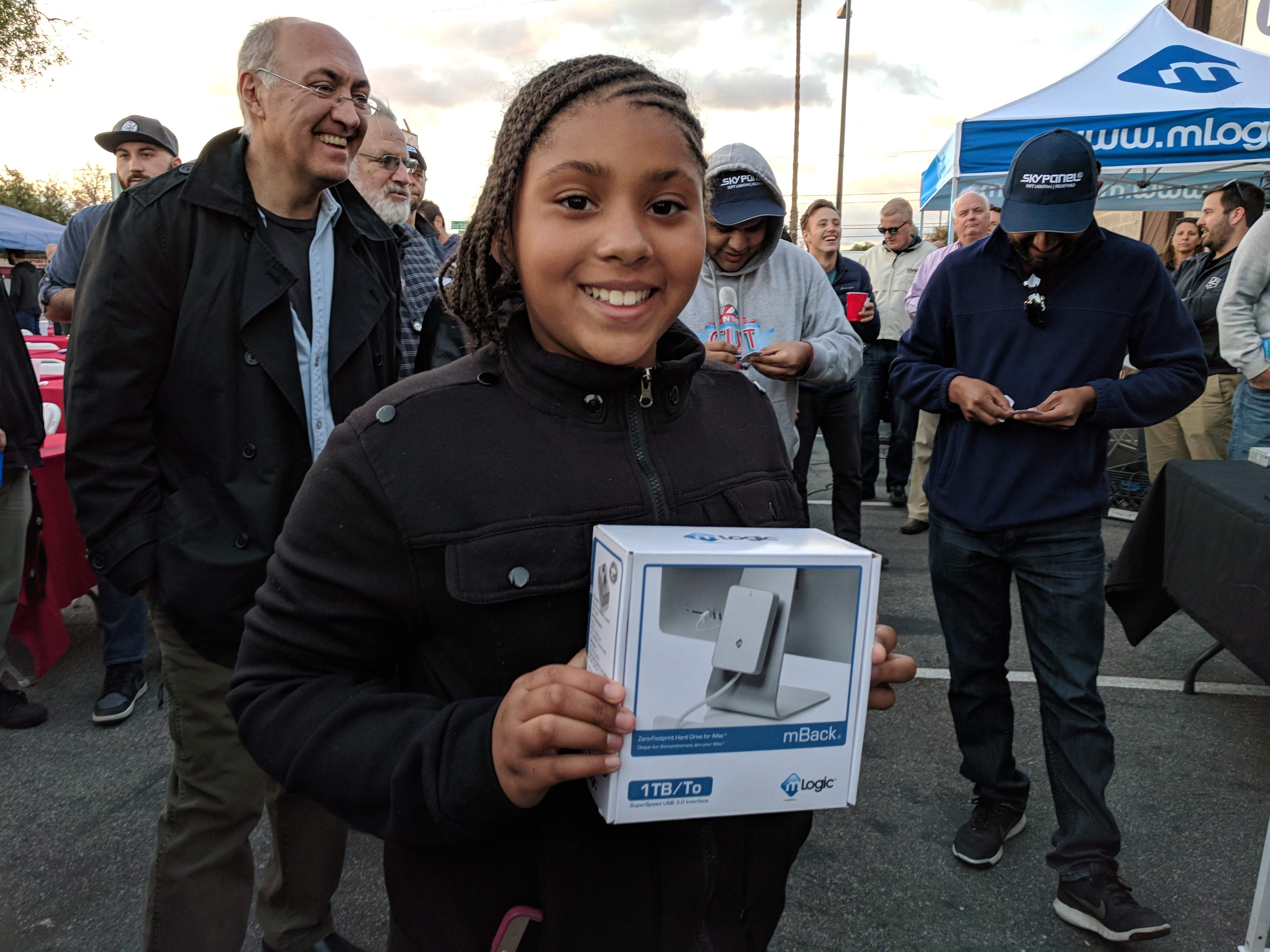 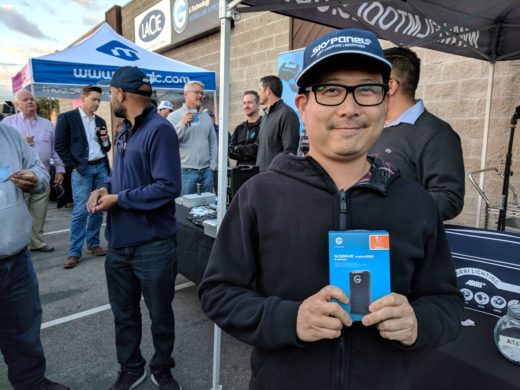 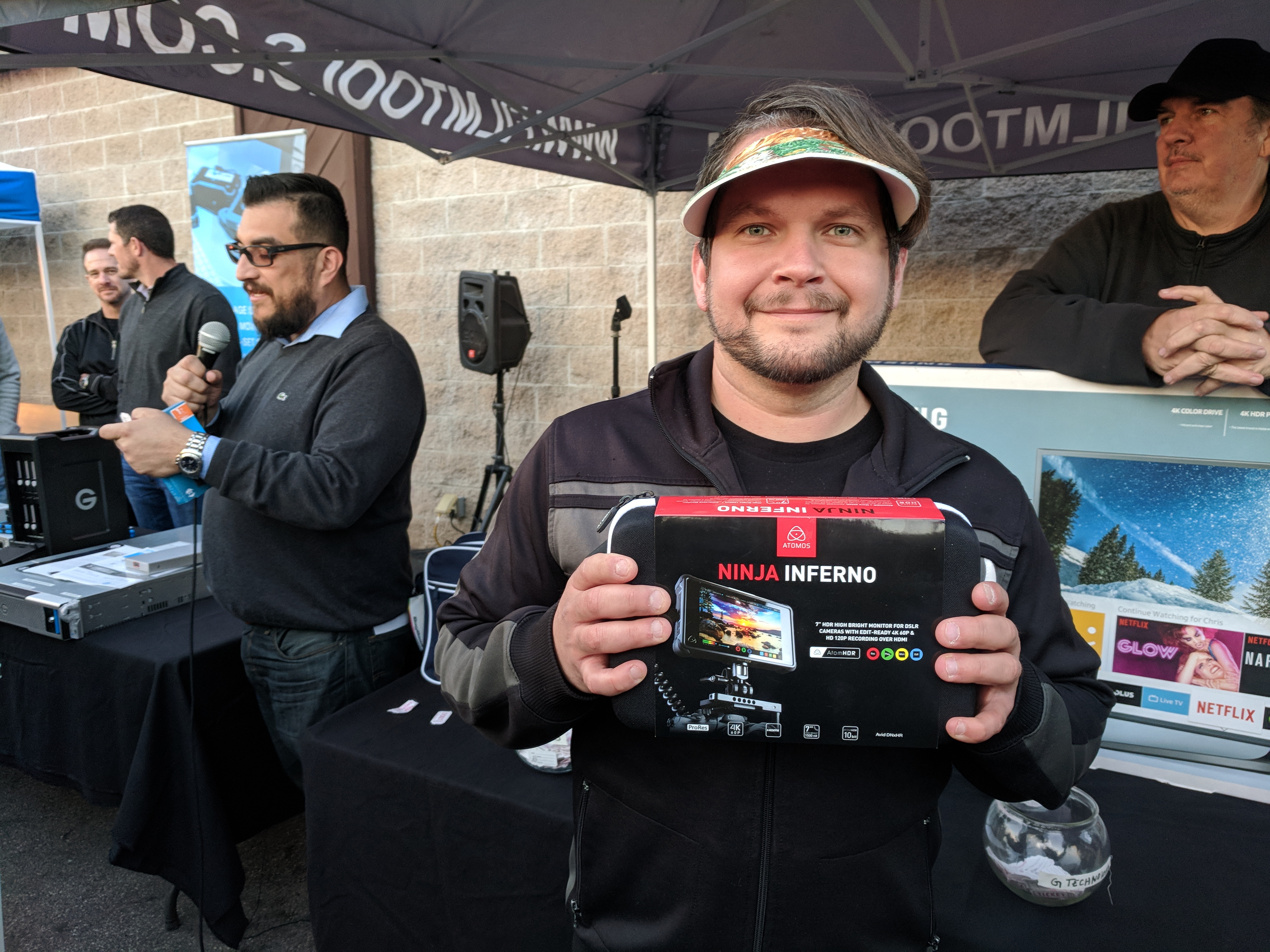 The day was filled with great conversation, awesome prizes, beer a plenty and tasty, tasty tacos. Smaller events supported by big companies do an amazing job of connecting folks from all walks of the industry, and Gear+Beers was no different. I personally met a couple folks I have admired for a while and never expected to see, and that alone made the day special on my end. The few hundred people who came through all looked like they had a similar experience, which made this Filmtools event a rousing success.