The last episode from season seven is a significant step for Game of Thrones, as the end of the popular series is nearing. Time to look at GoT from different angles, including what has been considered to be “the best seat in the house”. 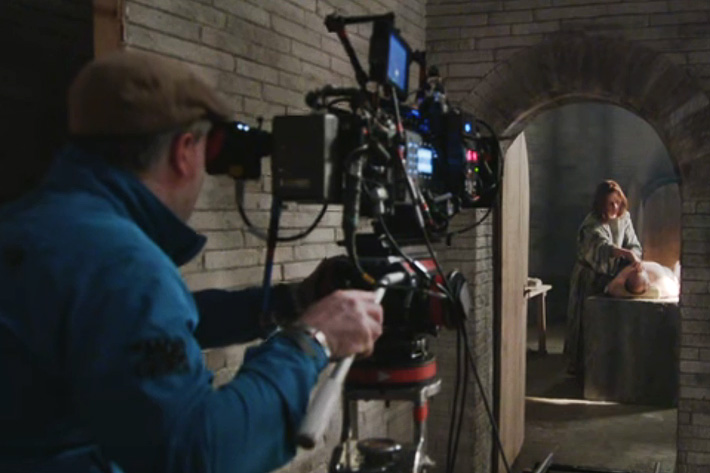 Season 8 will put an end to the saga Game of Thrones. One year from now the last six episodes, so is said, will free many professionals from what has been a long time commitment. The last candles are burning at Westeros.

The last episode from season seven airs Sunday, August 27. Game of Thrones will, probably, end before Christmas 2018. Filming is expected to begin this Fall, and between filming and post-production, the last season will be ready for viewing in September 2018, the usual date for launching series running through the Winter period. But Game of Thrones will not make it to Christmas, as airing six episodes will place the end of the show somewhere mid November 2018. Then it will be time to say goodbye to a TV show that has kept so many people glued to the TV screen, waiting for the next episode.

GoT is one HBO’s most popular ever series. The mix of George R. R. Martin’s stories with film crews who understood and could give life to the novels and make them TV products while respecting the complexity of characters and plots, contributed to turn GoT into a success. Halfway through airing the first season episodes, Game of Thrones was confirmed for a second season. That was in 2011, and since then the series has grown, for each season, to become one of the most awarded series on television and, what is more important, to be a show seen and loved by millions of people around the world. Nothing compares to it, apparently.

The best seat at GoT

Camera operators have, no doubt, what some consider to be the best seat in the house to see the show as it unfolds, and in GoT they saw it and will continue to see it being created, rehearsed, repeated, until the final scene is in the can. It’s their experience, the challenge of working for a project that has had different directors and direction throughout times but has had to keep faithful to “the GoT look” that makes Game of Thrones even more interesting, I believe. Game of Thrones has been, one discovers through the behind the scenes videos published, a laboratory of narrative experience, an alchemist’s studio where the screenplays adapting the fiction of one author considered to be the American Tolkien, are intertwined with CGI and special effects to create a fantastic medieval but still believable world that grabbed fans’ attention, episode after episode.

Game of Thrones was going to be shot on film. Was… because in the end digital was selected, and ARRI cameras were chosen. Alexa cameras registered the first scenes of the ten-episode season from HBO, filmed in Northern Ireland and Malta, with Alik Sakharov, ASC and Marco Pontecorvo, AIC, at the helm, sharing cinematographic duties. The rotation of the crew would start, then, with Matt Jensen taking over for Pontecorvo when he left the series to direct a feature.

The whole story and those initial moments are remembered in the article “ALEXA wins the GAME OF THRONES” published by ARRI. In the article Marco Pontecorvo indicates the initial goals for the series, saying: “ We began with a concept of a very strong and committed look, in order to express the atmosphere and scale of the show; we also decided on how the look should differ between Northern Ireland and Malta, in order to help the audience place each scene. Once we’d done that we started work on some LUTs to really discover that look – this was in preproduction – and then the LUTs were adjusted and refined while we were shooting. Alik made his adjustments and I made mine; mainly it was playing with the curve and applying desaturation, with a generally warmer look in Malta and a cooler approach for Northern Ireland.“ 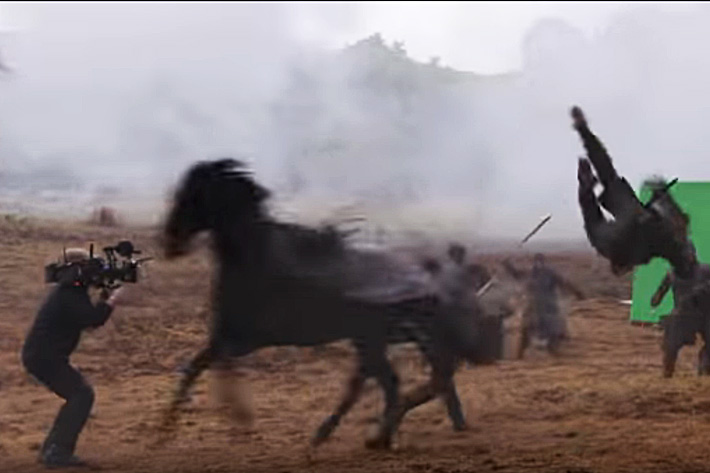 Regarding the choice of camera, Alik Sakharov revealed, then, that “we tested a film camera and two digital cameras very extensively for a full week and took the tests all the way through postproduction, working with Gary Curran, our colorist at Screen Scene. There was so much information in the ALEXA images that it just won us over” and added “I never thought I would be singing praises to HD technology and yet there I was, utterly enamoured by it.”

Marco Pontecorvo confirmed Alik Sakharov’s opinion about the equipment chosen and added ”I was convinced that ALEXA was the right choice as soon as I saw material from the two digital cameras. My only consideration was that, at the time, ALEXA was a prototype, so there was a chance that it wouldn’t be as user-friendly as a more established camera. But once we had taken the footage all the way through postproduction, we knew that ALEXA was the one. Both Alik and I are more used to shooting on 35 mm and it remains our first love, but ALEXA is very, very close and after we’d seen the test results we didn’t have any doubts that it would deliver both in terms of budget and quality.“

So, the ARRI ALEXA makes part of the history of the creation of Game of Thrones. In fact, it also contributed to make GoT the first hour-long series from HBO shot entirely on digital. But the ARRI ALEXA it is not the only camera on set, as in 2013 RED had a pair of EPIC-M RED DRAGON shipped to HBO for the Iceland production crew of Game of Thrones.  The show not only had its CGI dragon, now it had RED DRAGON cameras being used to capture some scenes.

The CGI dragon and RED’s DRAGON

The cameras from RED were first used during season four.  Some of the locations in Iceland held terrain that was unsafe for the Steadicam operator. According to cinematographer Robert McLachlan, the crew was able to get shots that would have been impossible without having 6K cameras light enough to be paired with handheld Freefly MōVI M10 rigs.

According to RED, “the CF DRAGON’s machined magnesium skeleton and protective carbon fiber shell support all the power of the EPIC DRAGON while weighing only four pounds. Its lightweight, durable construction has made the CF DRAGON an ideal choice for weight-sensitive applications. A member of the crew, Camera B-Operator David Morgan said then: “It was fortunate for us to be given the RED EPIC-M [CARBON FIBER] cameras…it meant we could use a high quality camera on the MōVI rig.”

While Game of Thrones’ hallmark quality and immersion were top priorities, there was no desire to sacrifice the crew’s safety. In similar circumstances McLachlan would typically use a series of long lens shots. But keeping the MōVI rig’s weight down using the CF DRAGON allowed for dynamic, focused shots while vastly reducing the risks involved. The ease of use, improved crew safety, and ability to maintain the series’ signature quality, concludes RED, “made the CF DRAGON an indispensable tool for shooting in the most difficult locations throughout Southern Iceland.”

Technology for a medieval world

Game of Thrones has been a display of technology evolution as well. The first season was still using Sony HDCAM SR tape and tape decks, but Francesco Giardiello, who is one of the busiest DITs around, working on major motion pictures and high-end TV productions had seen the latest Codex technology by the end 2009, while prepping the first season of HBO’s Game Of Thrones at ARRI Media in London and was eager to give it a try. In an interview published at Codex he says: I had heard about Codex, their external recorder and their road map for ARRIRAW recording from the ARRI ALEXA cameras. So we got a prototype to test. Although ALEXA was yet to be released, and it was still early days of the science behind ARRIRAW debayering, the potential of Codex to streamline and accelerate the workflow was blindingly obvious.”

So, in 2010, continues Francesco Giardiello, “after ALEXA was launched, we looked at Codex again, and saw the chance to get rid of tape for recording completely. It was the start of a great relationship with Codex, that continues to this day.”

From drones uses to represent the point of view of dragons, to the DJI Osmo used ”with a small digital camera on it that allowed a horseman to get shots while riding a horse at a full gallop through the cavalry charge”  Canadian cinematographer Robert McLachlan mentions during an interview, Game of Thrones crew have used anything and everything that helps to propel each episode to the visual level of excellence that is the hallmark of GoT.

The list of cinematographers associated with Game of Thrones does not stop there, though, as it grew throughout the seasons. Jonathan Freeman, ASC, and Kramer Morgenthau, ASC, Alik Sakharov, ASC, Marco Pontecorvo, AIC, Sam McCurdy, BSC, P.J. Dillon, Martin Kenzie, BSC, Robert McLachlan, ASC/CSC,  Chris Seager, BSC,  Matthew Jensen, ASC, or Anette Haellmigk are some of the names one finds associated with different episodes.

Anette Haellmigk shot two episodes of the show and she remembers the excitement felt when she found out there was a chance to work on the show: “ Game of Thrones came to me through director Alex Graves, with whom I’ve worked for 17 years. In Spring of 2012, when we were doing the 666 pilot together, he told me Game of Thrones had approached him to shoot two episodes, I said, “If you get it, you have to take me with you. I love that show so much, and I think I can contribute.”

The colours of GoT

A show able to move so many people, both from the production and audience side, is prone to create the more complex – and sometimes strange – studies about its evolution. We’ve seen it happen with different TV series, and GoT, due to its popularity, has been the base for so many interpretations that you’ll be able to discover by simply typing in Google  the phrase “the meaning of Game of Thrones”. Enjoy…

Here we look at a curious analysis about the use of colour in Game of Thrones. In a recent article under the title “More fire than ice: how Game of Thrones’ use of color has changed over 7 seasons” VOX offers readers a “colourful” perspective about the series. The  authors of the article reveal that “We analyzed the series’ use of color in all 66 episodes so far, capturing the screen every 10 seconds and averaging the colors in each image. We found that scenes where the average color is warm — that is, closer to red than blue — outnumber the ones with cold colors.”

Vox’s article offers an interesting take on a series that has captured the attention of a growing audience since 2011, but that now is coming close to its end. Meaning the world of Westeros will burn its last candle.