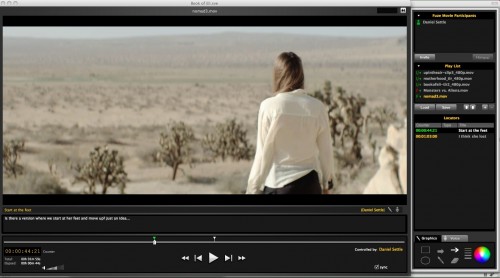 Before the days of FCP theater there was a software called SyncVue Pro. SyncVue was a remote collaboration software that piggybacked off the Skype infrastructure to allow realtime collaboration and sharing of content. I personally was a real fan of this software and was disappointed when I visited their site a while back and was informed that while the current software was still supported, the technology had been sold to another developer. Fast forward to last week when I discovered that SyncVue Pro had been purchased, and was to be re-released as Fuze Movie. So what does that all mean for end users?

First and foremost this acquisition means fresh life blood for SyncVue as a product, and that translates into a lot of potential down the road. So lets dive in and examine the good, the bad and the ugly. Currently I have tried a number of different remote collaboration systems ranging from screen sharing apps, to FCP theater. Currently they all have strengths and weaknesses and nothing perfectly fills the niche, Fuze Movie included. While I love FCP theater and the ability to review edits and make changes in realtime (a huge shift in remote collaboration), it is locked into only FCP as an application and it is not cross platform compatible. There is also some definite performance bugs as well. So lets take a look at Fuze Movie and see where it succeeds now and why it has potential down the road.

Fuze brings the complete original feature set of SyncVue to the table with a bit more snap and performance. That is the first thing I noticed was that the software seemed much more responsive. The image quality is also far superior to any other software I have used. The other outstanding news is that Fuze will continue to honor lifetime licensing purchased under SyncVue Pro. That makes for an easy decision for SyncVue users, make the upgrade. Now for the bad, currently there is no type of screen capture such as FCP theater offers. Fuze Movie is all asset managed, you can push and pull files a number of different ways. This isn’t all bad though, especially since it opens up the opportunity for collaboration at other parts of the pipeline such as VFX work, etc..However, in the long run I would love to see this application incorporate several options including some sort of high quality screen capture. I think FCP theater has spoiled me on this feature. The ability to see how a cut affects an edit immediately rather than uploading a file, is a must have.

Then there is the ugly, currently Fuze Movie still piggybacks off of Skype which means one more software to download and install. While this is not bad for us techies, trying to walk a client through multiple software installs and setups can be quite the pain. I look forward to the day when the simplicity of logging in to Fuze Meetings is brought to Fuze Movie. Simply email a link as an invite, the client clicks it and is added to the meeting with no mess or fuss. To me setting up Skype accounts and managing licensing is definitely worth the headache for a project that you will be collaborating on over an extended period of time. On the other hand if you have a quick commercial you want to look at with an agency, the ROI doesn’t seem justified.

On one hand I’m simply excited that a software I used is being resurrected, but I think the key word here is potential. I’m really excited to see what innovation Fuze will bring to this product down the road. Read the complete press release below for the full feature set.

Leveraging Skype as its communications backbone, Fuze Movie effectively eliminates the frustrations and inefficiencies of collaborating across distributed workgroups by creating a real time shared workflow environment for anyone with a computer and an Internet connection. Fuze Movie is based on the highly acclaimed review and approval solution, syncVUE, which was acquired by Fuze Box in 2007. Michael Buday, the industry renown editor who created syncVUE, is now the Company’s chief software designer and principal developer of Fuze Movie.

“As an editor myself for over 20 years, I understand the frustration and pure tedium of simply trying to get shots reviewed and approved while working with clients, crews, directors and colleagues who are spread out in multiple locations. That’s why we created Fuze Movie,” said Michael Buday, chief software designer for Fuze Box. “Today, the content creation industry has completely embraced the notion of distributed, networked and even mobile collaboration. Fuze Movie and its enhanced visual communications platform now gives them the ideal review and approval solution, specifically tailored for content creation workflow requirements and optimized for the technology and applications on which digital media artists have already invested and rely heavily.”

Fuze Movie extends the promise of powerful collaborative media sharing capabilities to the digital media review and approval workflow process and delivers an extensive list of features, including:

-A powerful media player with frame accurate control, with audio/video chat enabled by SKYPE;
-Ability to play any media file supported by QuickTime v7.1 or higher;
-Ability to play Windows Media and MXF files (via a plug-in from Telestream) providing compatibility with Sony’s Blu-ray based XDCAM
formats;
-Ability to add time-code-based text annotations (markers), automatically propagated to all connected clients;
-Features to draw, make notes or annotations directly to the shared media for all participants to see, and add to, in real time;
-Ability to record audio notes to add comments, recommendations or ideas to recall later or share with a colleague not in the session;
-A versatile database enabling users to track all assets (media files) wherever they may reside; on a server, local or networked drive, or
on the web;
-Built-in FTP function allowing media within a project to be automatically uploaded to multiple FTP locations. Clients running Fuze Movie
will automatically receive media files as they become available – keeping everyone in the project in-sync;
-Printed video frames with graphics, titles, notes and timecode can be exported as HTML files for viewing locally or online;
-Upon completion, XML locator annotations can be exported to industry-popular non-linear editing solutions, such as Final Cut Pro;
-Advanced license management system enables customers to extend temporary licenses to colleagues or clients for flexible, hassle-free
access to Fuze Movie.

Pricing and Availability
Fuze Movie is available immediately and is priced based on a quarterly subscription licensing model. Discounted introductory pricing starts at $229 for a two seat, three month license and volume discounts (for quantity of seats and duration of licenses) apply. For more information, please visit www.fuzemovie.com.

About Fuze Box
Fuze Box develops and markets solutions that allow people to communicate, collaborate and conference from any device, anywhere in the world. The Company has developed a real time visual communications platform converging audio conferencing with high-definition, synchronized video and image sharing across the enterprise, the web and mobile networks. Its applications – Fuze Meeting, Fuze Messenger and Fuze Movie deliver collaborative solutions for global professionals, from the corporate enterprise to creatives in post production, content creation and digital media design. Founded in 1998 as CallWave, Fuze Box has built a management and development team with deep experience integrating telephony, web and visual media technologies to transform how professionals and individuals communicate. For more information, please visit www.fuzebox.com.

FCAA DISCLAIMER
While I am a SyncVue User I purchased my license at the same retail price as everyone else, I have not been paid or received product from FuzeMovie in any way. This review is simply my opinion as a user of the product.