Fujifilm announced the official launch of the latest in its “MK” Series of cinema lenses – the Fujinon MK50-135mm T2.9 zoom. The lens will be on display at Cine Gear Expo, along with other lenses from Fujifilm. 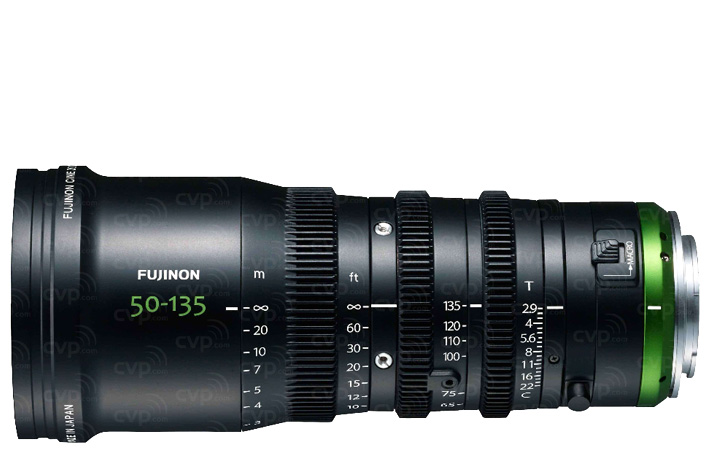 The MK50-135mm was shown during the NAB show last month and now will be on display at Cine Gear Expo. The new lens is available for $3,999, with delivery beginning in mid-July.

Presented as a companion lens to the MK18-55mm T2.9 zoom, introduced in February, the MK50-135mm will be on display to a motion picture and television production community at Cine Gear Expo 2017 in Hollywood, June 2nd and 3rd, and to documentary and reality producers at Realscreen West in Santa Monica on June 6-8.

The MK50-135mm is the same size and weight as the MK18-55mm, but with a 50-135mm focal length (both in the Super 35mm format). “It has all the performance that makes the MK18-55mm so exciting,” said Tom Fletcher, Director of Sales, Optical Devices Division of Fujifilm. “It has no breathing, no ramping, and the same par focal capabilities – all wrapped up in a new focal length for the series.”

With a combined focal length range of 18mm-135mm, together the MK18-55mm and MK50-135mm lenses cover the most frequently used range utilized by emerging cinematographers. The series offers fast lenses with T2.9 speed across the entire zoom range, enabling a shallow depth-of-field. Like the MK18-55, the MK50-135mm weighs in at a light 980 grams/2.16 lbs with front diameters of 85mm and lengths of 206mm. The MK50-135mm’s minimum object distance (MOD) is 1.2m/3.93 feet.

In addition to their lightweight and compact build, the “MK” lenses are purpose-built for the operator. Only one matte box and one filter size are needed between the lenses. Time-saving features include a macro function that allows for a broader range of close-up shooting, and gears for the three rings are positioned in the exact same place, which eliminates the need to re-position accessories when switching lenses.

“Many independent shooters use DSLR lenses, which aren’t designed for moving images,” added Fletcher. “Most still lenses breathe considerably, and they have no adjustable manual iris. Our MK’s have a seamless manual iris, zero breathing, no ramping or zoom shift, and 200-degree focus rotation. They maintain focus completely throughout the zoom range while covering Super 35mm sensors.”

The “MK” Series of cinema lenses, of which a X-mount version will be available this year, are just a fraction of everything Fujifilm has to show at Cine Gear Expo. The company will take their UA Series of HDR zooms, along with the entire range of Fujinon PL mount Cabrio and Premier zooms.

A projection room within the company’s booth will return after a strong customer reception to a similar event held during Cine Gear 2016. A variety of lens technicians from around the country, such as Matthew Duclos, of Duclos Lenses, are scheduled to discuss and compare the optical traits of Fujinon cinema style lenses throughout both days of the show.

“Cine Gear draws its sizeable crowd from some of our most active and involved customers,” said Tom Fletcher, Director of Sales, Optical Devices Division of Fujifilm. “While we’ve participated in Cine Gear Expo since its inception, hosting a projection room with independent optical technicians from various rental houses and service facilities is relatively new. We’re looking forward to connecting with our existing customers more dynamically in this way as well as with an exciting, new group of potential Fujinon customers.”