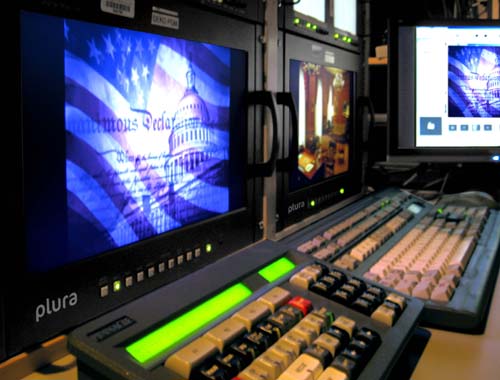 With outdated CRT monitors in its control room beginning to fail, The Florida Channel, a statewide satellite television service that provides coverage of the Florida state legislature, invested in new monitors from Plura Broadcast, a leading manufacturer of high-end professional LCD monitors for studio and field use.

The Florida Channel purchased a variety of PBM-117 17-inch and PBM-120 20-inch monitors through COMMAND Corporation, a professional video integrator based in Clearwater, Fla. “Plura Broadcast LCD monitors provide precision that exceeds expectations at a competitive price point,” said Michael Smith, president of COMMAND. “The Florida Channel needed something in place to accurately accommodate their 4:3 signals, but also give them the upgrade path to go 16:9 or HD in the future.”

The Florida Channel operates under the umbrella of WFSU, which is part of Florida State University in Tallahassee, Fla. Its programming includes coverage of legislative sessions, board meetings, press conferences, and oral arguments before the Florida Supreme Court. From its facility at the Capitol Building, it also produces original public affairs programming, documentaries, and interview programs.

Longordo said the main considerations for the new monitors were image quality, price, and reliability. Both the PBM-117 and PBM-120 offer built-in scaling and de-interlacing technology, as well as HD/SD-SDI, composite, RGB, YUV, Y/C, UXGA, and DVI inputs. The Florida Channel is taking advantage of the multiple inputs for monitoring multiple signals in the control room, Longordo added.

Currently, the facility is firmly entrenched in a tape-based, standard definition workflow. However, Longordo expects to eventually move to a server-based workflow and widescreen production. “The Plura monitors will allow us to adapt to a 16:9 format, which we hope to get to shortly,” he said.