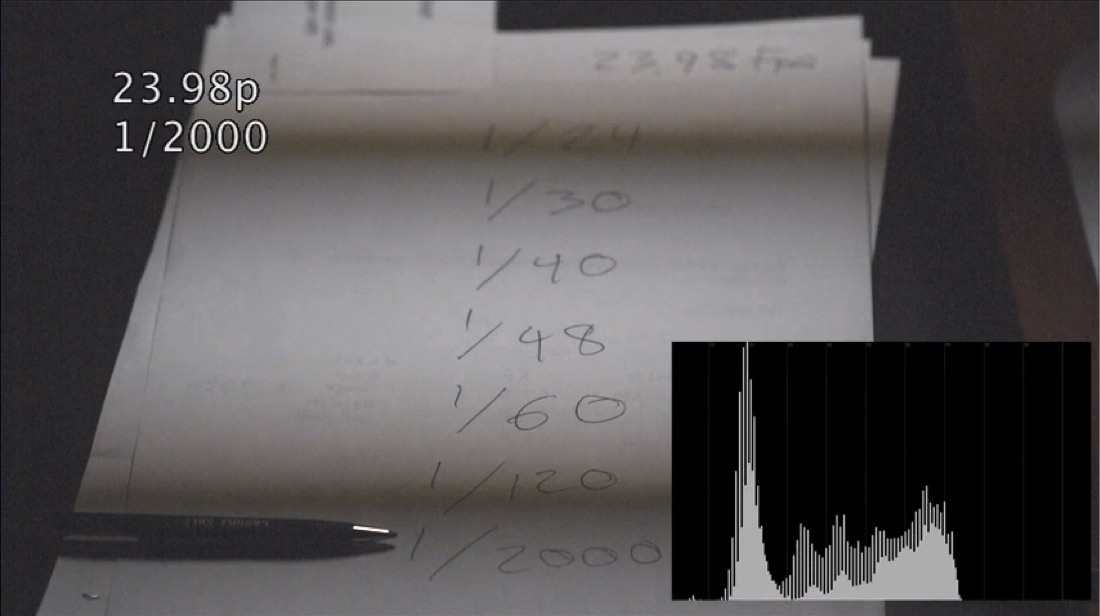 While working as a young second camera assistant on a film TV series in the 1990s, I noticed the DP set the camera shutter to 144 degrees (1/60th of a second exposure). I asked him why. “I’ve been burned by HMI flicker in the past,” he told me. “I’m never going to let that happen again.”

A few years ago, shortly after the RED ONE was released, I found myself shooting a short film for an internal ad agency film contest. It was a “just for fun” project, and I borrowed some gear from my regular crew to pull it off on a “short film budget.” As part of the lighting package I found myself with two 1200w HMI PARs, both with magnetic ballasts.

At one point during the shoot I noticed one of the HMIs was flickering. I noticed this while looking at a white wall (large flat surfaces are great for detecting flicker by eye) but I didn’t see it on our LCD monitor. I swapped the light out for the other 1200w head, changed my shutter from 180 degrees to 144 (1/60th second), and kept on shooting.

About nine months later I found myself on a job with a Sony F55, which has a global shutter. One scene, in a bedroom, saw us over cranking at 48 frames per second. The image looked great on our OLED monitor, but a little while later my DIT came to me for a quick chat. “The practical lamps are flickering,” he said. I walked quickly to his station, where he showed me that the lamps on either side of the bed were drifting in and out of phase: they’d look fine for few seconds and then flicker would appear, grow stronger, peak, and then gradually disappear.

This was completely invisible on the on-set monitor.

Recently, while researching an article on HDR, I found some articles on the Internet that may explain why kinds of flicker doesn’t always show up until post. The links to these articles can be found at the end of this one, in the event that you’d like to read them yourself, but I’m going to try to summarize the key points and touch on those things that are particularly relevant to filmmakers.

There are three things (at least) working against us when trying to detect flicker on the typical on-set monitor.

This appears to be the key to detecting flicker on-set. It’s a deceptively complicated subject.

We rarely stare at one spot on a display for any decent amount of time. Our eyes constantly scan the frame. A monitor with a refresh rate of 48hz will display a 24fps video frame twice at 1/48th of a second. That’s a fairly long exposure time to fast-moving eyes, and results in blurred pixels as our eyes dart around the screen.

This is the “frame rate” of the monitor. At 60hz, which is a fairly common refresh rate, the monitor will display 60 discrete frames per second, at 16.66ms per frame. At 30fps, each progressive frame will be displayed twice.

At 24fps, the monitor refresh rate changes to 48hz, so each frame is displayed twice for about 21ms each time.

DITs tend to use LCD displays that function at a higher refresh rate, typically 120hz. This means that each frame is displayed five times at 8.33ms per time. As each pixel appears sharper, differences between frames become more obvious.

This is the amount of time that it takes for a pixel to change from one hue and intensity to another. For example, given a 60hz display, if a pixel takes 8ms to transition from black to white, then its first frame will appear as white for only half of its 16ms screen time.

The shorter this transition period is, the sharper the image will look as the eyes sweeps across it. For example, if the same pixel takes only 4ms to change, that means it is now in its intended state for 12ms.

This is different to how CRTs functioned, where a phosphor pixel’s brightness would start to decay almost immediately after being painted, resulting in a “dark gap” between frames. This effect was largely hidden by painting the odd scan lines during the first half of the frame’s display time, and the even scan lines during the second half (interlacing). If every line had been painted from top down, the top would have started dimming by the time the electron beam reached the bottom of the frame, resulting in a noticeable roll bar.

This “dark gap” was still visible, though, in that the display time for any given line was less than 1/60th of a second. This translated into the appearance of increased sharpness to the roving eye. Sample-and-hold eliminates this effect: a frame that is meant to be displayed for 1/24th of a second appears for exactly that long.

Some OLED displays add artificial CRT flicker through a process called Pulse Width Modulation (PWM), where “dark gaps” are introduced between frames by turning the pixels off. This artificially-induced flicker reduces each pixel’s “exposure time” and decreases motion blur.

Likewise, some high-end LCD monitors will add “dark gaps” through the use of a strobing backlight.

When the camera’s shutter is in phase, or synced, to a flickering light source, the flicker disappears. When the camera is out of phase with a flickering light source, flicker appears. When shutter speed and lamp flicker rate are slightly out of phase, they will slide in and out of phase such that the light may not flicker noticeably for long periods of time, but will then ramp into and out of a period of flicker. Unless one is looking at exactly the right spot on the screen at exactly the right time, the flicker may not be immediately noticeable. Typically I have so much to do that I can’t spend a lot of time examining every portion of the screen for flicker, but an on-set DIT will often spot it when they scrub through clips to check them for integrity. High-speed scrubbing reveals flicker issues better than anything else.

Editors do this as well, which is why they notice flicker immediately.

Long ago, in the days of magnetic ballasts, HMIs were prone to flicker if the power mains frequency drifted or the ballast wasn’t well maintained. Shooting with a shutter angle/exposure time that captured the same number of light pulses in each frame was the safest way to avoid flicker. By phasing the camera’s exposure to the light’s flicker there was much more latitude in how far the light’s flicker rate could drift before it became a problem.

This combination of frame rate and shutter angle/exposure time became known as the “HMI Safe Window.”

I always shoot within this window. For example, I never shoot at 24fps without setting the shutter to 1/60th of a second (144 degrees). I don’t care if I’m outdoors or indoors, or shooting with tungsten lights vs. HMIs, LEDs and Kino Flos: I habitually set the shutter to 144 degrees. Doing this consistently will eliminate most forms of flicker. The “normal” shutter angle of 180 degrees results in an exposure time of 1/48th of a second, and that doesn’t sync well with a 60hz light that’s having problems. That’s literally living on the edge of the HMI safe window.

When shooting off speeds I will always aim to put the exposure within the HMI flicker free window. I live in a 60hz power country, so I’ll shoot 48fps with a 144 shutter or 60fps with a 180 shutter, both of which give me an exposure time of 1/120th second.

1/120th is a dangerous place to live. I will check the monitor very carefully for flicker, looking in particular at the on-set practicals and LED sources. When the camera captures images at 120fps, and the light is flickering at around 120fps, camera/light phasing is critical.

PRACTICALS MUST BE TESTED

Small halogen bulbs have become a serious flicker issue as of late, and my suspicion is that they are more energy efficient because their filaments may be thinner. A thin filament means a big change in brightness when the AC current cycle switches direction and the filament cools during that transition. (Larger filaments take longer to cool and are less prone to flicker.) The effect is especially pronounced if the bulb is dimmed, as the filament cools more between cycles.

I refuse to take practicals for granted: if I’m shooting at high frame rates I will always shoot a quick test and view playback on multiple monitors to see if any of them flicker.

LEDs can’t be dimmed by reducing voltage but instead are best dimmed by adjusting current, and this kind of circuit can be expensive to build. It’s cheaper to flicker the LEDs at high speeds (pulse width modulation) so they appear to dim. High quality LED lights flicker at insanely high speeds and are largely flicker free even at high frame rates. Cheap LEDs tend to flicker at a rate that is invisible to the eye but is easily visible to a camera.

Whenever I work with a new motion picture LED fixture I always look at how it performs against the camera when dimmed to its lowest setting.

Industrial LEDs seem to do their own thing. Sometimes LED practicals in the background will phase at 1/60th of a second (144 shutter) and sometimes they won’t. I’ve noticed that exit signs seem particularly troublesome in this regard.

Sometimes the best way to detect flicker is to watch a luma waveform. Global shutter flicker will turn up as a flickering trace on the waveform, and may be hard to detect as most in-monitor waveforms run at reduced frame rates to save on processing power. For example, an on-camera monitor’s waveform may only run at 12fps or 6fps, making flicker harder to detect.

Rolling shutter flicker will show up as a slow rolling movement in the trace, as if part of the image is breathing.

Sometimes false color will show flicker faster than anything else if the flicker causes enough of an exposure change that a portion of the frame transitions from one color to another. Rolling the lens aperture slowly may put flicker on the edge of a false color range and reveal it more quickly.

WHAT YOU SEE IS NOT ALWAYS WHAT YOU GET

My solution: always shoot within an HMI safe window, no matter the frame rate. That solves 90% of the problems I’ve run into. Doing that, along with refusing to take a practical light for granted at odd frame rates, will give you the best odds of avoiding a late night call from post.