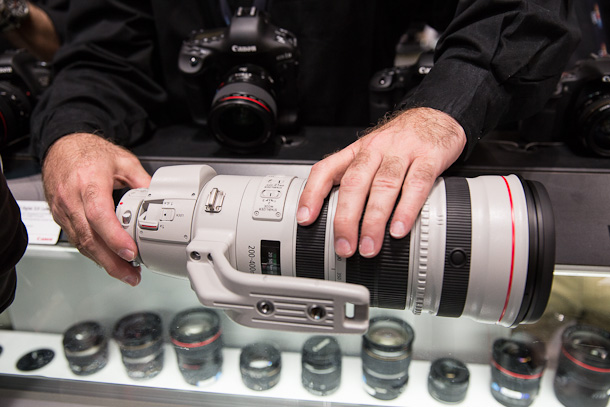 The Canon 200-400 f4 L IS was pre-announced by Canon at CP+ more than two years ago and as such, has probably become the most desired lens for Canon professionals the world over.  Realistically, with an estimated price tag of $11,000 this won't be a lens that many can justify but judging by the traffic I have received every time I post about it there is a lot of excitement for this lens.  Various versions have been out in the wild for testing at major sporting events during the past year and more so than any lens before, it seems Canon is REALLY taking its time with this one.  Initial reports from those that used it at the Olympics in Londone were very good but now Austrailan photographer Joshua Holko has spent some time testing it and posted some new video with his first thoughts.

The video starts of with some very positive things to say about the ergonomics of the lens and the initial impressions of quality.  A short second part of the video though shows Joshua after clearly having viewed the test files on his computer for the first time.  What is quite funny is that he seems in genuine shock at the quality of them!  He says that they appear to be as sharp as any of Canon's super telephoto lenses and there is virtually NO degredation when the built-in 1.4 teleconverter is activated.  Importantly, he also tested a 2x teleconverter with it and not only confirms that the combination is possible to use, but also confirms that the resulting quality of the images is highly useable.  In effect then this gives you a lens that will capture eveything from 200mm to 800mm, a mouthwatering proposition.

Since the initial pre-announcement of this lens I have been squirreling money away to afford it and this video has me even more excited than Joshua !  I had some hands on time with the lens myself in New York at PhotoPlus Expo last year and whilst the weight was surprising to me, it felt fantastic. So far no firm launch date has been set and Canon are keeping quiet on that front but after two years of time in the public eye, and doubtless more than that behind the closed doors of the design studios in Japan, you have to think this is going to come soon….. please 🙂