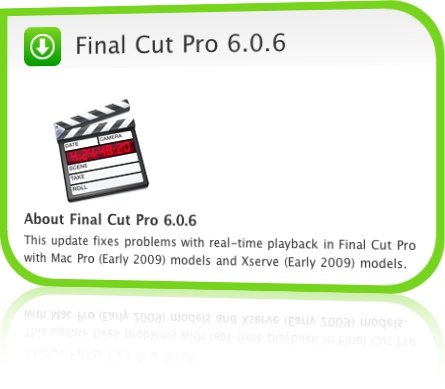 A new Final Cut Pro update has arrived… FCP 6.0.6. Your Software Update may have alerted you. On first glance it looks pretty minor,as it addresses only 1 major fix. But once you dig into the release notes it gets interesting. The 6.05 update (which also gets installed if you hadn’t updated, has a TON of features.

Improved High-Precision Rendering
If you render sequences using the high-precision video processing setting, make sure to update to Final Cut Pro 6.0.5 for improved reliability when rendering still images and footage in high-resolution formats.

As someone who uses graphics (a lot) this is welcome.

The notes are very detailed with several features for all the FCP updates. If you downloaded, but never read the release notes… be sure to give them a read. There are even more features that come in handy.