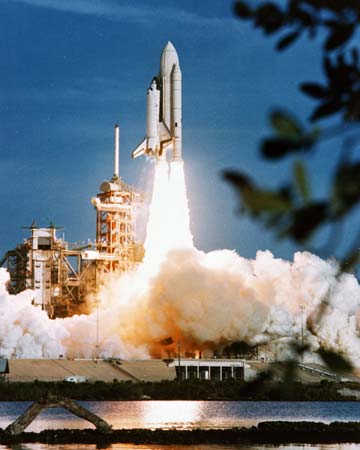 When astronauts had a problem out in space, you heard the familiar “Houston, we have a problem” radio call. With FCP X, the problem is in Cupertino. What if Steve Jobs was running NASA?

This story was inspired by Oliver Peters and the following really cool web site.

Astronaut: Cupertino, we have a problem. It seems that ten years of costly space flight training has gone up in smoke. None of the switches here in the space shuttle seem to do anything.
Cupertino: Switches are an antiquated control paradigm.
Astronaut: OK, that’s cool, but we’re trying to dock to the International Space Station in three minutes.
Cupertino: Docking isn’t really supported with the new space shuttle.
Astronaut: Excuse me? It’s the main thing we have to do! We fly up into space with stuff. Dock. Fly back. That’s pretty much the mission. Three things.
Cupertino: Well, you’ve got to admit that the launch was completely amazing right?
Astronaut: Well, yes. But there’s no gas pedal on this baby. You guys did all of the launch procedures for me.
Cupertino: We think it’s better that way.
Astronaut: Well, I spent twenty years flying supersonic jets and I prefer to have a bit more control.
Cupertino: Control is overrated. Seriously, just by saying you’ve been flying jets for twenty years, it’s obvious that you’re old and set in your ways.
Astronaut: Seriously? Do you know how many airplanes and helicopters I’ve learned to fly? Each of them has thousands of controls. Heck I can even drive trucks, motorcycles and I once piloted a unicycle.
Cupertino: I’m not really impressed. I created the controls which is much more important than actually doing the flying.
Astronaut: Look. I need to dock. If I can’t connect to the ISS the flight itself is pointless.
Cupertino: We removed the docking doors.
Astronaut: WHAT???
Cupertino: There was the danger that inexperienced astronauts would open them in mid-flight.
Astronaut: Inexperienced astronauts? Isn’t that an oxymoron? You trained me for 10 years!
Cupertino: Well, we want to send up younger astronauts now with less training and a willingness to “think different.”
Astronaut: I earned this damn job because I “think different.” But I’m still here because when the crap hits the fan, I can land in one piece.
Cupertino: Your point?
Astronaut: … OK. So we can’t actually complete the mission. I’m gonna pull a big ol’ U-turn and bring this baby back to the landing strip. … I can’t seem to find the navigation panel…
Cupertino: There you go with your old ways of thinking. Try the “home” button.
Astronaut: What if I didn’t want to come home?
Cupertino: Of course you want to come home.
Astronaut: Well, what if there was a hurricane at the landing site and we were running out of oxygen?
Cupertino: (sound of crickets… In space, no one can hear crickets, if crickets in space existed, but this is a George Lucas kind of space story.)
Cupertino: We hadn’t really considered that. We aren’t astronauts after all.
Astronaut: Well, we would have loved to consult with you. We could have told you some of the important stuff that is mission critical.
Cupertino: Astronauts are really stuck with old ways of thinking and can’t keep up with the folks here at mission control who are mainlining Mountain Dew and skateboarding to the bathroom whenever they need to take a crap.
Astronaut: … Never mind. I hit the Home button and it says that it can only import navigation commands from an Xbox.
Cupertino: I know. Cool, right? Talk about “awesome!”
Astronaut: Well, it would be cool, but I only have Halo installed and it’s a GOSH DARN IMAGINARY WORLD!!!! I need to get to CAPE FRICKING CANAVERAL!
Cupertino: Bummer. Xbox import seemed so cool and, we were on our way to ComicCon the week we programmed that, so we didn’t really have a lot of time to do something like import from Google maps or whatever “professional” solution you astronauts deemed. So I guess just go to manual controls.
Astronaut: Perfect. That’s why they sit us flyboys in the captain’s chair! … Uh, Cupertino, the joystick isn’t functioning.
Cupertino: Joysticks have been around for dozens of years. The Soviet Cosmonauts use joysticks and they’re really old-fashioned, so we disabled it.
Aastronaut: Well, maybe they’ve been around for dozens of years because they WORKED!!! Plus the Soviets beat us into space and regularly launch WAY more flights than Cupertino… flights that can actually DOCK and GET THINGS DONE, by the way. So if the joystick doesn’t work, how do I control the ship?
Cupertino: Gestures.
Astronaut: Gestures.
Cupertino: I know. Awesome, right?
Astronaut: Well, there’s an astroid headed for us, so I’d really rather not learn a completely new control paradigm at the moment, but, I’m a big boy and I’d love to learn.
Cupertino: It’s really, really easy. If you want to go left, just wave your hands to the left. To go forward, you push your hands forward. You’ll get the idea quickly.
Astronaut: Hey, this isn’t bad! Kind of cool! I like this. This is a whole new way of thinking! Very intuitive.
Cupertino: See! We think of everything.
Astronaut: OK, I’m starting to pull about 20G’s at the moment… keeping my hands floating in the air is …. a … little …. difficult….
Cupertino: What is a G? Isn’t he that cool director who did the Charlie’s Angels movie?
Astronaut: No. That’s McG. G’s are units of gravity.
Cupertino: There’s no need for G’s anymore. We call them “pushy stuff.”
Astronaut: Why?
Cupertino: The branding department felt Gatorade had a lock on the “G” brand and had already established that as a brand identifier. Plus it’s so old-school.
Astronaut: Well, if I need to be passed over to mission control in another part of the world, I can’t very well call them “pushy things.” Nobody will know what I’m talking about. Never mind. Look, since I’m about to black out from “pushy things” maybe I should just turn over control to the pre-programmed mission control flight plan we created from the previous mission?