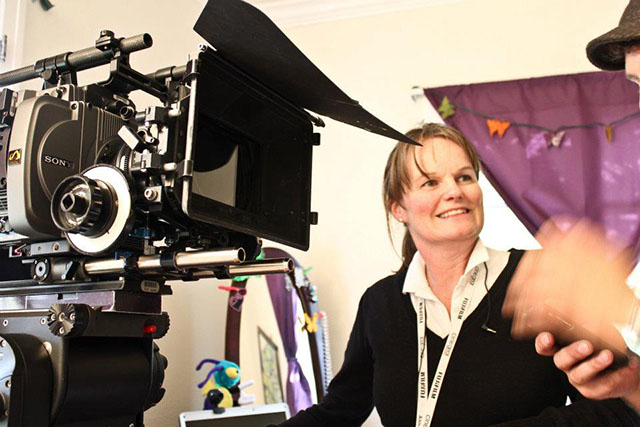 Making “Sticks & Stones” was personally rewarding for Kate Rees Davies and Steve Romano. Having the film about childhood bullying make it to the 2013 Cannes Film Festival added a nice touch of critical recognition.

“The subject matter is so important,” said Rees Davies. “Being at Cannes is wonderful news all around. The festival is great exposure for the film, for us, the cast and the crew.”

Also, she added, great exposure for the Sony F65 digital motion picture camera that Rees Davies and Romano used to produce “Sticks.” The short film was the team’s first F65 experience and also their first digital cinematography effort. Both came away thoroughly impressed by the technology, with an appreciation of how the Sony flagship camera is a perfect fit even for low-budget productions. Rees Davies and Romano will use the F65 again on their next collaboration, “The Vanished,” scheduled to begin production in September.

“The F65 is amazingly well-developed,” Rees Davies said. “This camera is very simple to use and the workflow is very straightforward.”

She describes the camera as ideal for lower-budget projects, because of its jack-of-all-trades flexibility.

“This camera adapts to so many different scenarios so well,” she said. “You don't need complex lighting set-ups; practical light is often more than sufficient.  We had a very small budget, very little lighting and no technical support on hand. We basically had to figure it out as we went along – and we did, with great success.”

Since “Sticks” wrapped, she and Romano have worked together on two other projects. When “The Vanished” begins production, they’re looking forward to the F65 capturing the same feel that made “Sticks & Stones” so special. Romano expects the camera’s capabilities to again play a large part in telling their story, for example, being able to shoot mixed light interiors easily, and matching a sunny day with rainy day scenes.

“This camera handles anything you throw at it,” he said. “The colors are intense, and then once you start to bring content into post, you have the tremendous freedom to be able to tweak colors and make things match perfectly.”

Romano noted that in addition to image quality, the F65 presents a crew with the total package for getting a shoot done easily and on time. “Just having built-in NDs is really great,” he said, “since it saves so much time on set, as far as not having to throw a filter on.”

“The Vanished” will tell the story of Mexican immigrants and their often treacherous journey through deserts to reach Los Angeles — the ones who make it and those who don’t. Much like the “Sticks” project, shooting conditions will vary greatly from outdoors to indoors and day to night.

“We plan on doing a lot of crane shots and time lapse so we will definitely put the camera through its paces at all times of the day, relying heavily on natural light,” Rees Davies said. “I'm excited to see what it can do.”

“I really want to capture the diversity of the desert,” she said, “from its desperation and harshness to its scariness and incredible beauty.”

Romano added, “Then, when we get to Los Angeles, we’ll be doing a lot of street scenes and interior shots. The F65 is perfect for this project. Its latitude is incredible, which helps it adapt seamlessly to all our different shooting conditions.”

“Sticks & Stones” is Rees Davies’ second Cannes entry, but her plan is that it’s only the first of many more she’ll shoot with the F65.

“Being an independent pioneer for this technology is very exciting for us,” she said. “As a director, it’s truly exhilarating to have access to such a high-end camera, so early on in my career. The F65 can really do some serious stuff!”

“Sticks & Stones” will be featured in The Short Film Corner at Cannes, which opened this week. Read an earlier article about the Sticks & Stones and the F65.