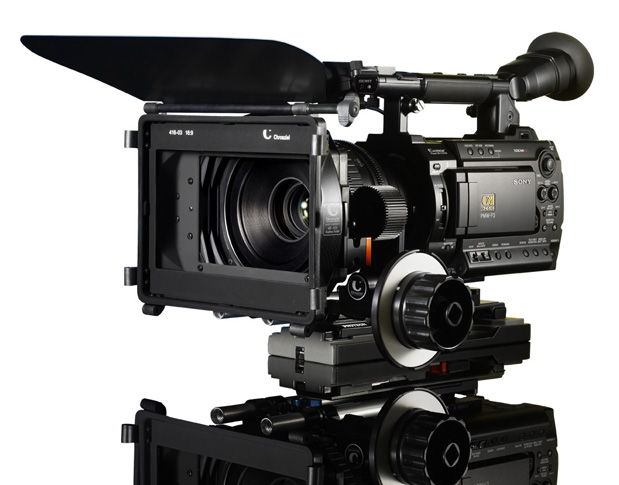 The F3 attracted directors of photography through a combination of Super 35 imagery, practical workflow and accessible pricing. At the initial launch, Sony discussed a roadmap of firmware upgrades, effectively promising to make the camera even better over time. We’ve been delivering on that promise consistently.

Many DPs consider Log encoding an essential tool for maximizing highlight detail, shadow detail and range of adjustment in post. Sony’s implementation, called S-Log Gamma, takes the form of a logarithmic tonal curve that assigns digital code values of the 10-bit RGB components from deep shadow to bright highlights. It appears to work. In the words of director of photography Ed David, “S-Log has saved our butts more times than I can say.”

Original S-Log frame grab from Alin Bijan’s “The Ghost of Goodnight Lane,” shot with the F3. The flat, somewhat washed-out look is typical of uncorrected S-Log.

The same image, corrected. Thanks to S-Log Gamma, the face is nicely exposed, yet darker areas retain detail.

In Log workflow, the full dynamic range of the image is initially hidden. For this reason, S-Log operation uses LUTs (Look Up Tables), small text files that map the Red, Green and Blue conversion from S-Log. The F3 comes with LUTs that you can modify, customize and use in DaVinci Resolve, Assimilate Scratch, Baselight FilmLight, Final Cut Pro, Quantel Pablo and Autodesk Lustre.

The F3 can record 8-bit S-Log images using the on-board XDCAM EX™ recorder or output 10-bit S-Log 4:2:2 or 4:4:4 RGB to external recorders. A range of output permutations enables you to simultaneously record a LUT image onboard and S-Log outboard, to capture S-Log in 4:4:4 or 1080/60p recording, among other options. In the latest camera firmware (version 1.40) you can access S-Log as a gamma curve in Picture Profiles that also include your settings for white balance, matrix, detail and the rest. So you can tweak, store and recall everything.

For more on S-Log Gamma, check out the experiences of Pro Video Coalition’s Mike Curtis, see the test results from Abel Cine Tech’s Andy Shipsides and see this previous post from The Sony Tech Guy.

Conventional, 4:2:2 color subsampling takes advantage of the human eye’s relative insensitivity to color detail. Because it offers high perceived resolution while slimming down the data rate, 4:2:2 can be a smart choice for many projects. But for the most demanding greenscreen/bluescreen shoots, 4:4:4 RGB color is better still. Originally an option, 4:4:4 RGB output is now a standard feature of the F3.

While many productions choose the camera’s on-board XDCAM EX™ recording as their primary shooting format, others opt for outboard recorders, of which there are many. The PMW-F3 firmware 1.40, a free upgrade, delivers particular advantages when recording to Sony’s SR-R1 SRMASTER field recorder. The R1 captures either 4:4:4 or 4:2:2 as lightly compressed SR files or uncompressed DPX files. With F3 firmware 1.40, the R1 captures the full range of metadata available from the camera. The R1 captures clips with exactly the same timecode, start frame, stop frame and filenames as the onboard SxS cards. And the R1 supports 1080/60p recording. In fact, there’s undercranking and overcranking from 17 to 60 frames per second in full HD resolution. 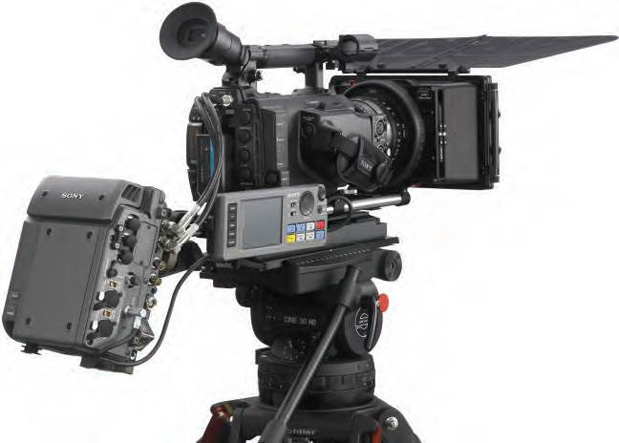 The F3 is shown here teamed up with Sony’s SR-R1 SRMASTER recorder.

For those of you who want to use the camera’s LCD monitor like a viewfinder, Sony created the optional CBK-MH01 monitor hood. With 1.4x magnification, it helps achieve precise focus, even in exterior day and even with shallow depth of field. By using the LCD screen, you’re not tying up an HD-SDI output. The hood quickly flips up when you want to share the picture with others. Other features include diopter adjustment, angle adjustment and quick release. 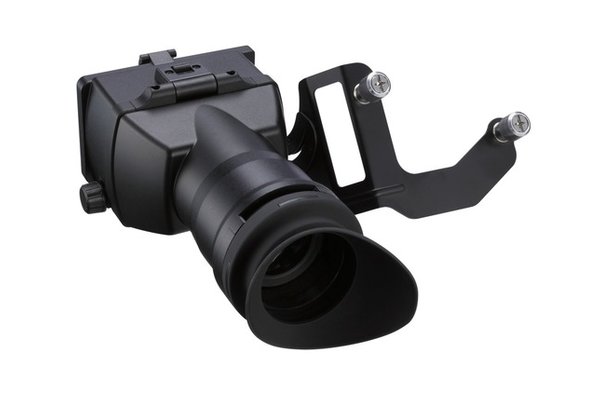 Sony created the camera’s native FZ mount to accept PL lenses via the supplied adaptor and a multitude of still camera lenses via third-party adaptors. The mount’s electronic contacts enabled Sony to develop a new FZ mount zoom lens that provides Super 35mm cinematography with a full range of automatic features. Our 18-252mm T3.9-6.8 zoom lens, the SCL-Z18X140 is made for running and gunning. The lens provides auto/manual focus, auto/manual iris, servo/manual zoom and optical image stabilization. A rocker on the camera handgrip controls the zoom, just as users of prosumer camcorders might expect. Also new is the wide-angle PL mount zoom, an 11-16mm T3.0. Designated the SCL-P11X15, it complements the three prime lenses that come in the PMW-F3K kit.

Already a great camera, the Sony F3 is better than ever with these new refinements.