Every now and then you get one of those Useful Tools that comes along and it changes the way you work, for the better. One of those for me has long been the Macintosh extension Alfred that lets you call up a little panel no matter what you’re doing, type in a few letters, and execute any number of commands. There’s also something similar called FCConsole for After Effects. Now we get this kind of functionality in Adobe Premiere Pro via Excalibur.

What all does it do? The bullet point list:

And you gotta watch the firm tongue in the cheek video demo.

Excalibur comes to us from the Knights of the Editing Table. You may remember that unique name as they developed Watchtower to monitor import folders and make bringing media into PPro a breeze. Excalibur is on a whole other level as the integration goes deep into Premiere and adds usefulness that I didn’t think was possible.

Excalibur is a deep system install. I say deep in that in the Mac you have to enable a few accessibility options so Excalibur can monitor your keypresses while working in PPro. Why does it have to do that? You hit a keyboard shortcut (option+space by default) so unleash Excalibur and bring up this floating console, read for you to type your commands. A few keystrokes about what you want to do and you get a whole list of different things to execute Choose your command and Excalibur executes it.

While you’ll likely see a lot about all the effects that Excalibur can apply (and it can apply all of them) I think some of the workflow things like the Duplicate and Increment illustrated in the animated gif above are most useful and the biggest timesavers. Set up your sequence naming right and you never have to manually duplicate and rename sequences again. 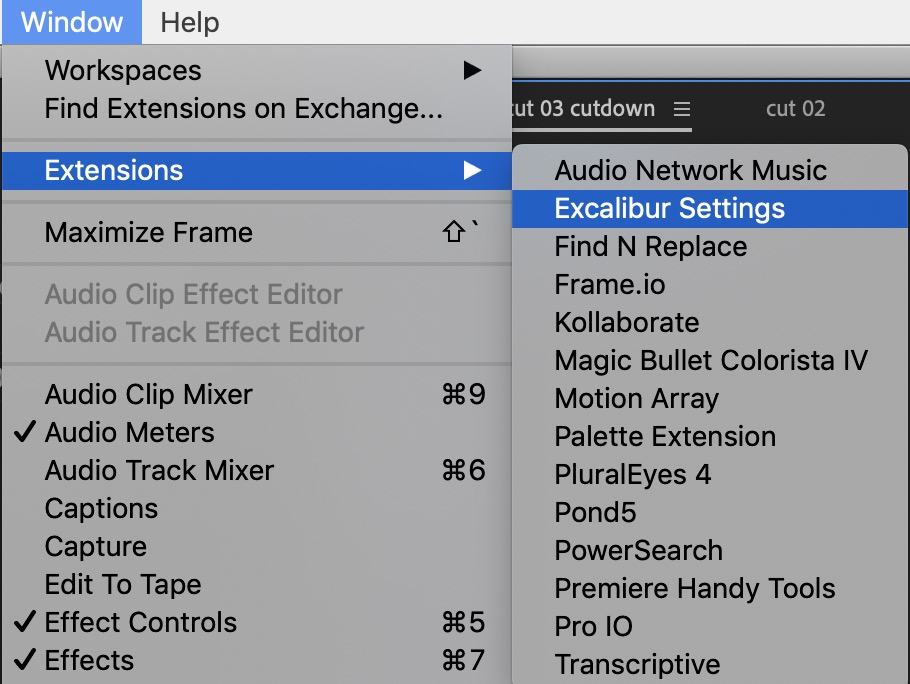 Opening the Excalibur console you can search through the many Commands that it will support. It’s advised to dig around and learn what all Excalibur can do. 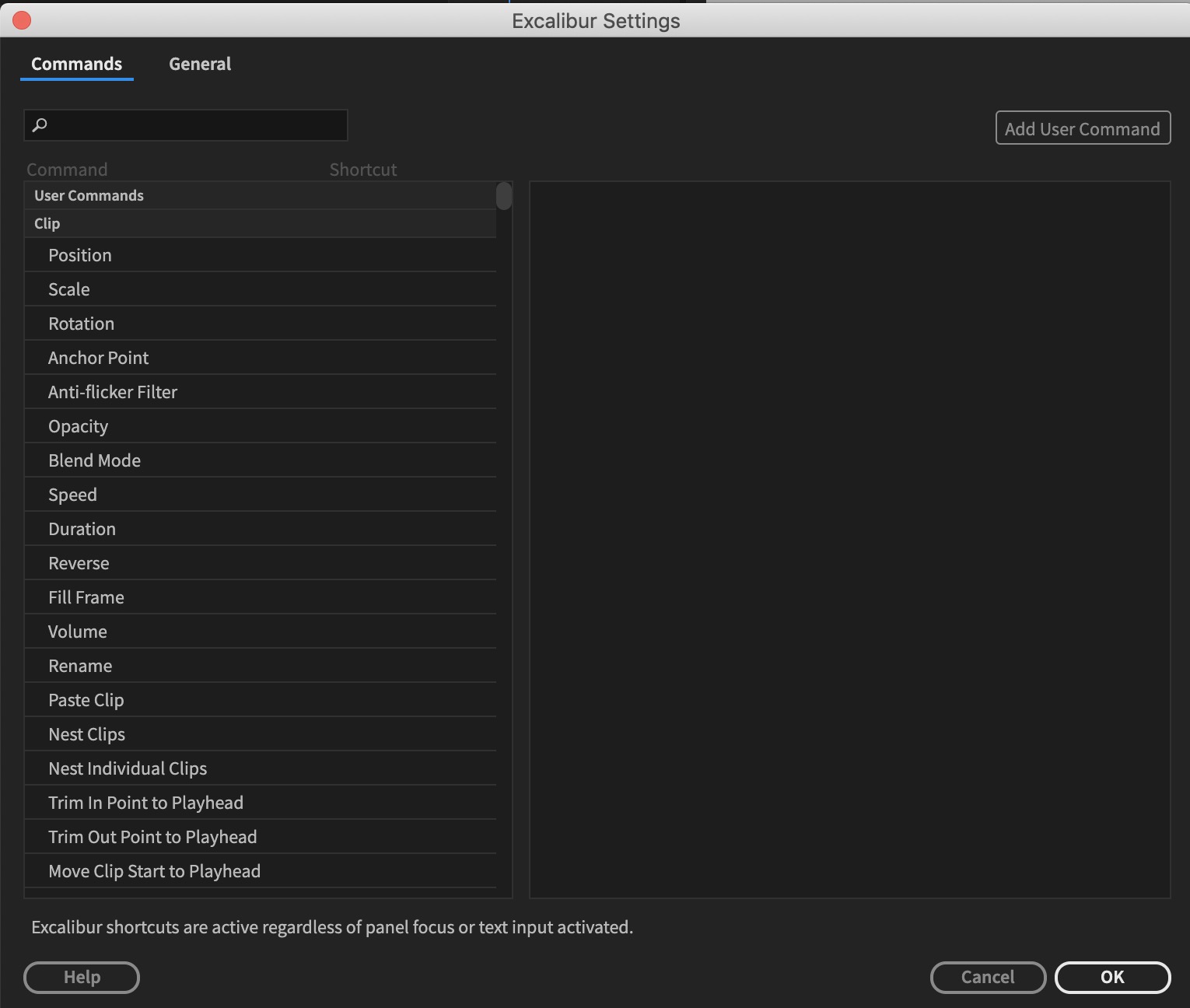 That’s a long list of functions to scroll but most of them are all the different audio and video effects you might have installed as you can apply them from the Excalibur menu. User Commands are things the user can build and it’s something that I haven’t even really explored yet. Like a lot of tools, you have to dig in to get the most out of your investment.

Trying to summarize everything Excalibur can do in a few sentences is quite difficult as I’m still exploring it myself. Excalibur costs $75 but is on-sale with a launch special at $50. That is a bargain for everything this tool can do and how much time it can potentially save. It’s available for both Mac and Windows. I don’t see a demo option which is a shame as it’s really the kind of thing you need to feel but $50 isn’t too much to ask. Being that Excalibur is part of the Adobe Premiere Pro Extensions architecture demos might not be possible.

If you’re on the fence about buying I would recommend spending some time reading over the Excalibur documentation as you can learn a lot about what it can do before you buy. I discovered a few things just writing this article that I can’t wait to try.

I think one of the biggest time savers from Excalibur is the ability to add effects without ever having to dig into the Effects palette. The cumbersome drag and drop of effects is a thing of the past with Excalibur. Better than that is your custom presets can be applied with a keystroke. 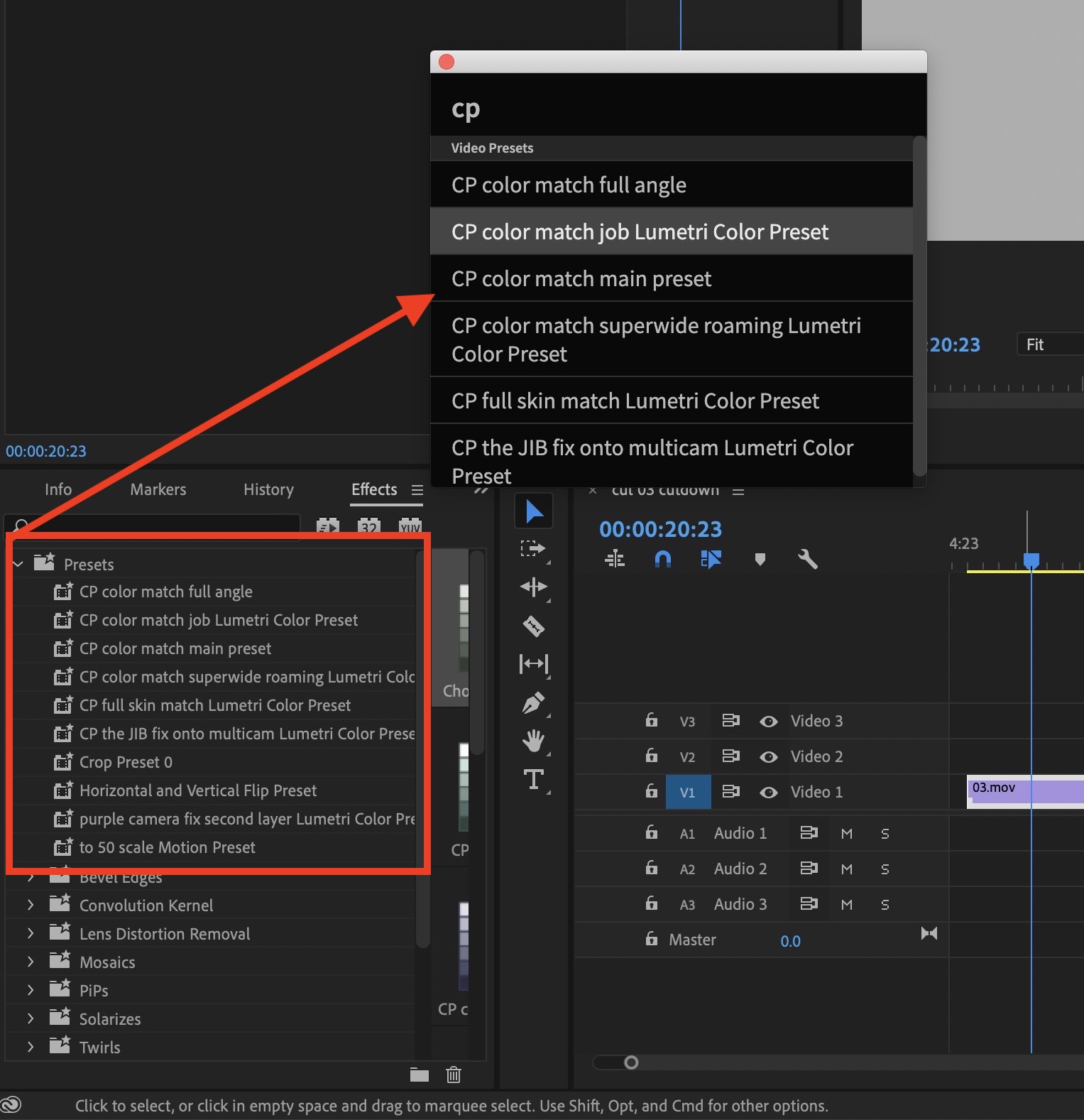 This is a great example of Excalibur’s usefulness. See above there are tons of these “CP” Lumetri color presets that I have saved. All of them accessible via Excalibur and can be applied without ever touching the mouse. 🤘👌👏👍 That is a huge timesaver.

It’s important to note that there can be two levels to executing an Excalibur command (and that is a good thing). A command like Apply Transition can apply a transition and let your type in a duration for a custom transition length, not just the default. That is a pretty amazing amount of time that can be saved without ever having your hands leave the keyboard. That said in the release version I can’t get the transitions to apply but I have mapped away a lot of the Premiere keyboard defaults for applying transitions. When I use the default keyboard shortcuts for Premeire applying transitions via Excalibur works. I was able to get Excalibur to finally use transitions with my custom keyboard but quitting and restarting Premiere. I think that sort of trains Excalibur as to what your custom shortcuts are. If you have a very custom mapped keyboard you may have encountered third-party tools over the years that don’t work exactly as advertised as many of the work with the default keyboard shortcuts. Such is the price we have to pay for customization efficiency I suppose.

Also, read over the Limitations & Bugs. This will give you an idea of what Excalibur might not be able to do. For example, I mentioned applying those Lumetri presets above but the PPro API architecture doesn’t support curves or color wheels. So if you’re deep into curves then you may be disappointed. But you’ll love applying all the other effect presets via your keyboard I can tell you that!

Study those Preferences and options

I would recommend giving yourself a period of learning Excalibur and being okay with stopping your work to open the Extension and dig around. You’ll need to look into the options that Excalibur can provide and then figure out how to use them. For example, it took me a while to figure out how the soloing of tracks work and I’m not sure I’ve got it figured out yet. Soloing seems to lock the tracks in the case of audio and not actually solo/mute/unmute. 🤷‍♂️

But then look at this Marker command:

That is applying a colored extended marker over a clip range in the timeline, again without ever touching the mouse. This will probably be most useful just to apply a single colored marker. This command is applying a timeline marker as it doesn’t seem to work to apply a clip marker. It’s work noting that part of Excalibur’s limitations will be with what Premiere’s Extensions architecture allows it to do. Several times while testing the beta I asked about a command but was told it isn’t currently possible.

I will note that during the beta testing I had a few issues where the engine that makes Excalibur run would quit and it would stop working within Premiere. Knights of the Editing Table is a small developer and he would keep tweaking and sending over new builds as we tried to nail down the problem. I moved off of Premiere for a few weeks on another job so I’m looking forward to trying out the release version which should have fixed my issues.

I’m very excited about the possibilities of Excalibur. It’s literally something I’ve never seen in Adobe Premiere Pro and as a keyboard-based editor, I can see huge time savings. As long as you learn how to use it properly it can save you time. As bugs are worked out and new functionality is added I think the value will continue to be there.