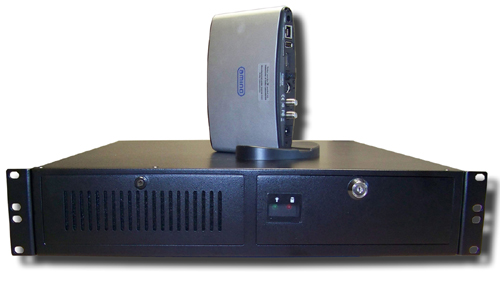 DVEO, the broadcast division of San Diego based Computer Modules, Inc. (CMI), is introducing an updated version of their professional DVB-S or DVB-S2 to IP multi-channel gateway. DVEO will feature the new OnRamp S-S2/IP™ at the International Broadcasting Convention (IBC) in Amsterdam, September 10-14, at Stand 2.A48.

Designed for use in cable broadcasting, telco TV, IPTV, and A/V systems integration, the OnRamp S-S2/IP inputs a mixture of one to four satellite channels and outputs them to a dedicated IP network. The video streams generated can be viewed on television sets with standard IP capable set-top boxes, or on computers using streaming video software clients such as VLC or MPlayer.
The Linux®-based system supports MPEG-2 and H.264 input and output in SD and HD format. Customers can also order the system with the option to transcode MPEG-2 streams into H.264/MPEG-4, up to a maximum combined bitrate of 12 Mbps.

“The latest version of OnRamp S-S2/IP includes IP output with real-time live adaptive bitrate streaming, which sends multiple streams so receivers can adapt to the stream that best fits their bandwidth,” noted Laszlo Zoltan, Sales Manager for DVEO. “This delivers smoother online video that starts faster. With adaptive bitrate streaming, customers can send video streams to mobile phones and hand-held devices such as the iPhone and IPad. Another important new feature is near real time FTP output of segmented transport streams.”

The unit provides PID filtering of all unwanted traffic, increasing system performance and the number of channels which can be transmitted per unit. It features remote configuration management via a web browser and Secure Shell (SSH).

The system is available in a two-rack unit with one to four DVB-S/S2 receivers, or in a compact rack-mountable single channel unit. The option to transcode from MPEG-2 to H.264 can be included with the system, or added later as an upgrade.

Note: OnRamp IP gateways are typically deployed in “closed” systems where bandwidth is dedicated and is used for this purpose only. They are not designed to work over the public internet.