The Phantom 2 Vision+ (plus) is DJI's latest offering of their popular consumer-level multirotor “flying camera”. With their own built-in 14MP/1080p camera on a 3-axis gimbal, this quadcopter is indeed ready-to-fly right out of the box. I've given it a few flights to test it and here are my first impressions…

The Vision+ is literally ready to fly out of the box – after charging the batteries and spinning on the self-locking props. The controller is similar to the previous Phantom 2 line of quadcopters and like its predecessor, the Vision+ camera controls, FPV (First Person View) and OSD (On Screen Data) are all operated by your smartphone. My iPhone 5 synced right up to it through the WiFi extender – actually quicker than the original Vision. *Tests have shown that you can run the iPhone version of the app on the iPad/iPad mini, but it will run in lower-resolutions. See my personal experience below.

**UPDATE #2: See my addendum at the end of the article below.

The Phantom 2 Vision+ is very easy to fly and quite responsive. The GPS mode hovering is very steady even in moderate winds and while my speed tests were somewhat limited, it seems to be equally fast as the original Vision.

I didn't do extensive distance tests but plan to offer an all-around, head-to-head comparison test against the original Vision soon.

I did however, manage to let the Vision+ dip down behind a the top of some trees at about 700ft and first lost the FPV signal and then I lost the transmission connection. I immediately flipped it into RTH (Return To Home) mode and it quickly popped-up and made its way back toward the original launch site – which I was able to snap it back into GPS mode as it got closer and regained control for the remainder of the flight. In all, the Vision+ did what it was supposed to but I just don't recommend ever flying out of line-of-sight with it.

So – what about this new built-in camera with 3-axis stabilization?

Well, the stabilization is superb! Watching videos back that were recorded in GPS mode and allowed to hover, you'd swear you were just looking at a still photo. Motion is much improved as well if you can manage a very smooth touch on the control sticks. However the controls are very sensitive and the slightest rotation/panning of the Vision+ and you'll still notice it jerk into position without any ease-in/out (perhaps further investigation into gain controls through the NAZA2 Vision software might help? I will investigate further). Wind, however, has much less affect on the stability of the video now compared to the original Vision.

Also, you can't take videos and photos simultaneously. You must stop recording video to take a photo. This is something I rarely do as I capture video most of the time, but will construct panoramas from individual video frames. In further testing, I will compare the 14MP camera's still photos to the original Vision. However, the 14MP still photos you can take with the Vision+ will provide you with both JPG and DNG (Camera RAW) that can be fully processed in Adobe Lightroom or Photoshop CC. This is superior to having a GoPro for still photographers wanting to make sweeping panoramas. 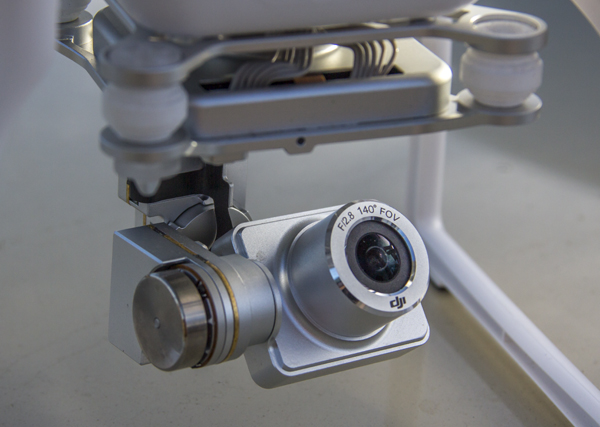 I must say I was a bit disappointed with the optics of the f/2.8 140 FOV camera overall, and hope that DJI will have a fix soon to address a few issues. As you will see in the example video below, there are some bad glare and flares when the sun is within the hemisphere you're angled toward. Of course you might expect a small amount of lens flare with a coated lens like the GoPro but there is definitely some room for improvement here. I will be doing some further tests with attaching filters and a lens hood and will report back my results.

As with any of the Phantoms, since the camera is mounted underneath the belly of the craft, the legs will occasionally get in the shot as will the props. And you will also get the “shutter glare” effect when the sun filters through the rotating props and creates horizontal glare striping. I would think DJI would have provided some kind of a lens hood either attachable or integrated into their camera design by now. Looks like a job for a Shapeways 3D Printer project!

And for videographers, you're going to be a bit disappointed in the auto-exposure in the Vision+, as it has a slight “stair-stepping” as you move about in and out of shadows or panning around the sky – as you will notice in this example video. I've confirmed that DJI is aware of this and am hopeful there is a firmware upgrade that will alleviate this in the near future.

In this example video, I've only taken footage directly from the Phantom 2 Vision+ and edited select clips from a few test flights. There has been no post-processing, color correction, lens correction, speed adjustments or image stabilization. All of the videos were shot at 1080p/30fps as they are in play-back:

SPECS (as listed on DJI's site)

I had a chance to fly the Vision+ again this past weekend with my friend and colleague Colin Smith (PhotoshopCAFE) and I was able to try the iPad Mini as my FPV monitor for a flight. Unfortunately I didn't have a mount for the iPad Mini for the controller so I used an iOgrapher frame and mounted it to a tripod next to me. Normally, this works okay for FPV flying but when all your OSD and camera controls are on the screen and keeps disappearing until you touch the screen again, you're constantly having to take your hand off the controls to tap the iPad Mini. Perhaps there's a *preference setting I need to check for to remove the “auto-hide OSD/controls” that I've never had to worry about on the iPhone. *(It has been confirmed by DJI that this auto-hide feature can be turned off in the software).

In any case, without a proper sun-shield on the iPad/iPad Mini, it's pretty useless as it's not bright enough and the screen is way too reflective – and we were out with cloud cover and fog rolling into San Francisco at the Marina. 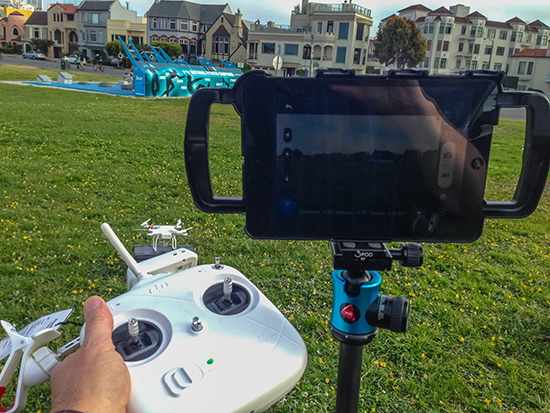 We also had a chance to test the maneuverability of the P2V+ even in 14mph+ winds and they handled quite well – even when we were trying our hand at a “mock dog fight”. You can see we got a little close here… (video footage will be posted soon). 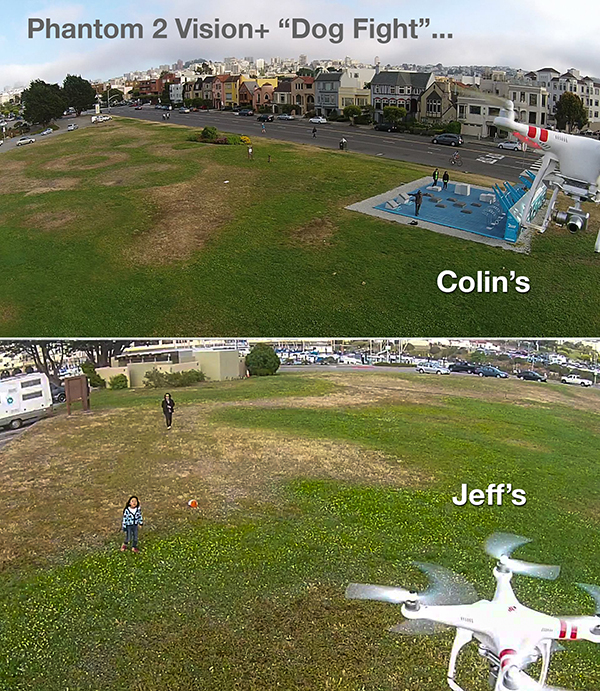 And if you want to see how well the new P2V+ 3-axis gimbal works, check out this video that Jacob Lackey created for his YouTube channel that shows the gimbal in action for an outrigger POV off the landing gear.

Russell Preston Brown from Adobe Systems does a segment on the best settings and practices for the Phantom 2 Vision+ Camera and how to stitch panoramas in Photoshop: 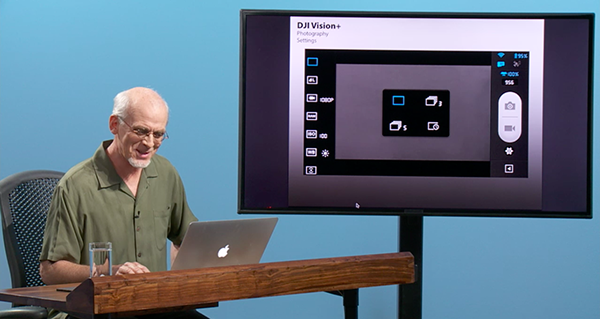