DJI launches Osmo Action 3, introduced as the camera to “Capture Moments Beyond the Edge”. It well may be, but it’s also the end of the modular camera dream for DJI. 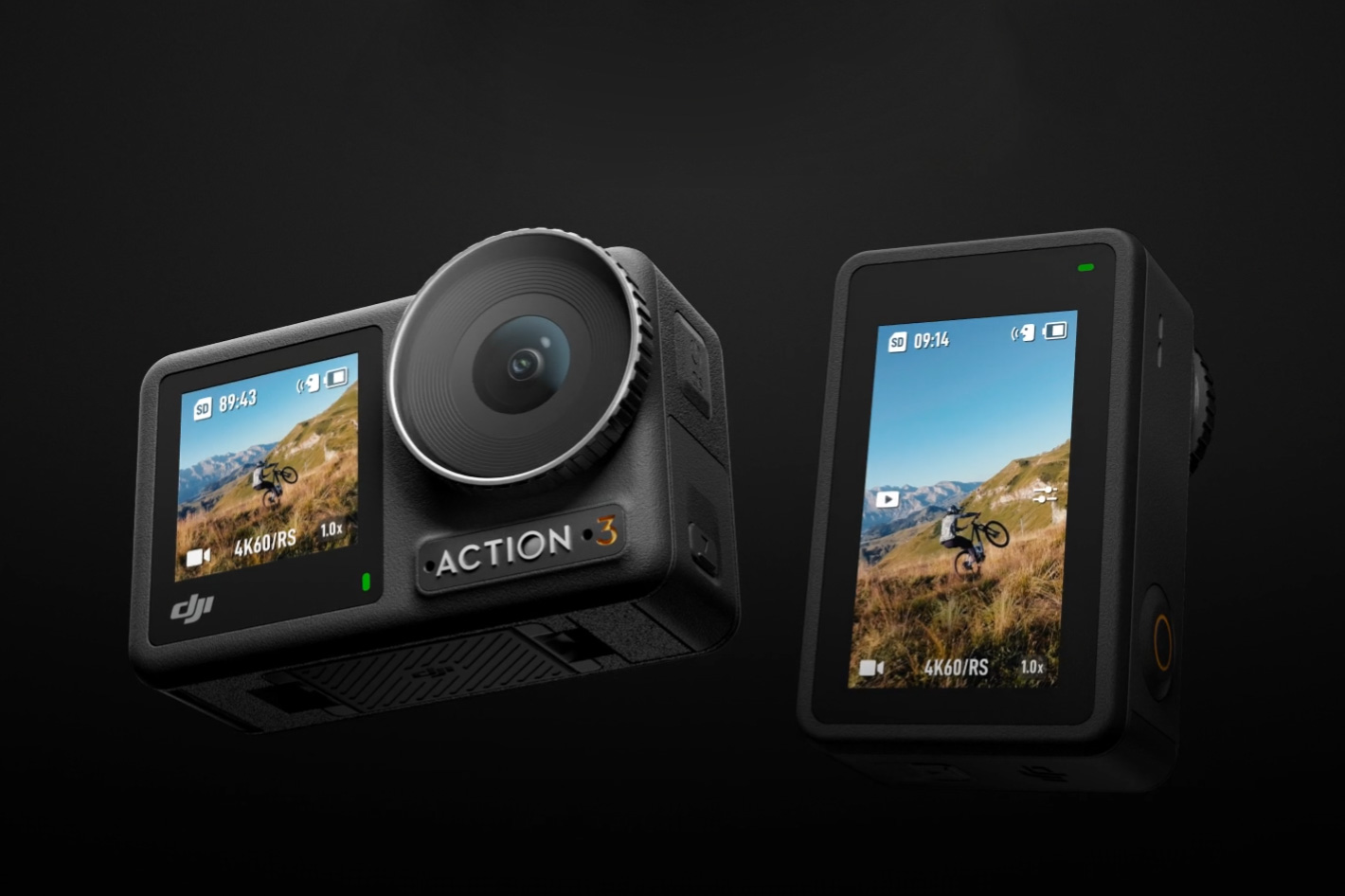 Native support for vertical shooting, which social media seems to prefer, and a battery that empowers users through the most extreme conditions are two keys features of the new DJI Osmo Action 3.

DJI is back with a new product, and it’s not a drone. It’s, again, a camera, an action camera, the DJI Osmo Action 3. Introduced as the most powerful and content-friendly action camera DJI has ever made, this new model features, says the company, “a battery that empowers users through the most extreme conditions and native vertical shooting for a new perspective of creative freedom, Osmo Action 3 is one of the most versatile, robust, and reliable action cameras available today.”

“Ever since we released the original Osmo Action in 2019, we have been continuously inspired by the stunning footage captured with it,” said Paul Pan, Senior Product Line Manager at DJI. “As our users keep pushing further, moving faster, and diving deeper, our mission is to provide a device built to keep up with them. Every new feature made Osmo Action 3 the most reliable, tough, and easy-to-use action camera. We can’t wait to see what our users create when they push their limits with Osmo Action 3.” 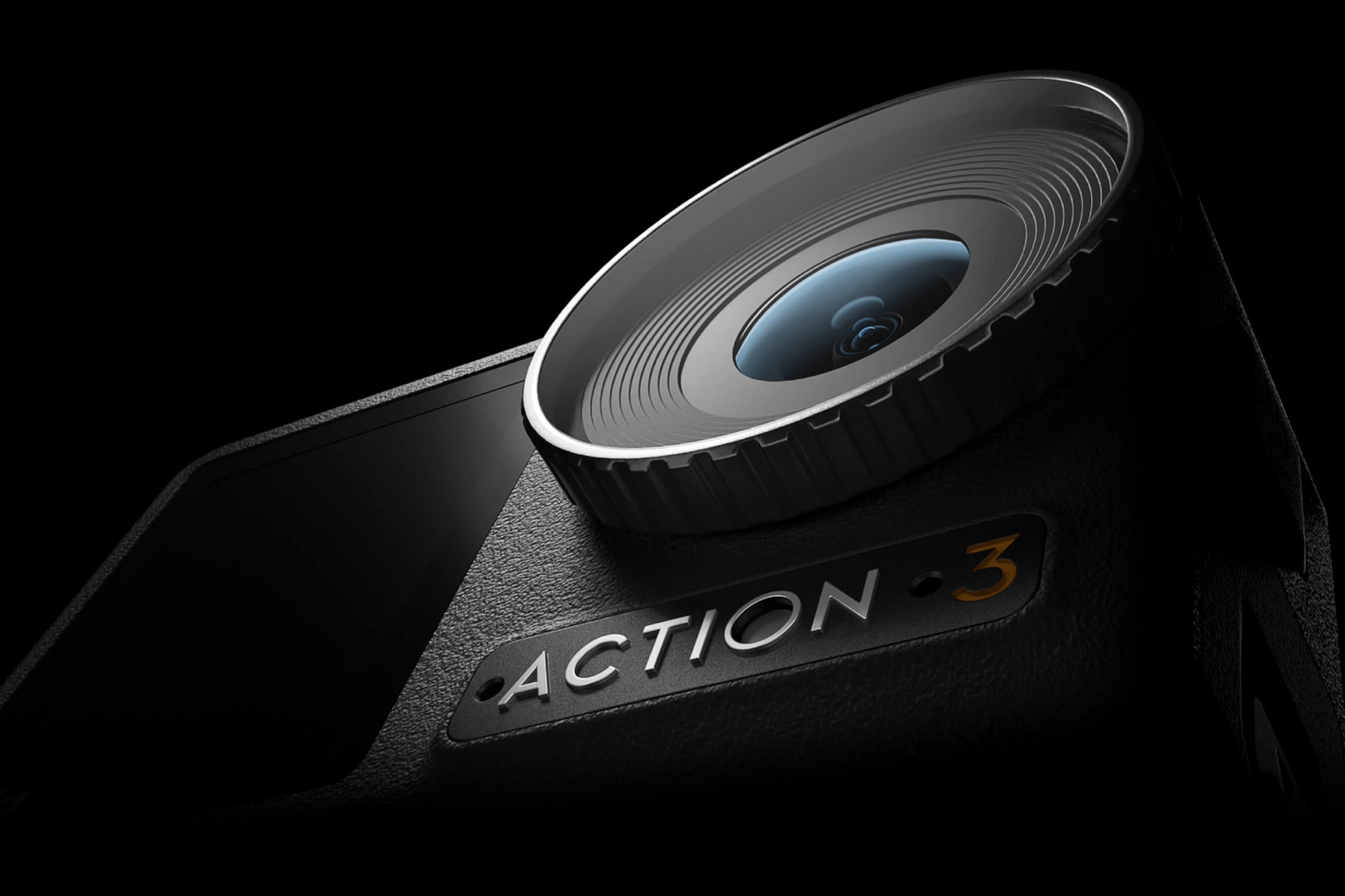 The return to the Osmo family

The original Osmo Action (presumably 1), launched May 2019, was presented as “the ideal camera for life’s adventures, everywhere you go, above and under water” and the first DJI handheld camera to include RockSteady, DJI’s Electronic Image Stabilization technology. The new DJI Osmo Action 3 picks a modern version of the technology and, if you’re wondering why there is an Osmo Action 3 and an Osmo Action 1 and not a DJI Osmo Action 2, it’s because…. There isn’t.

In 2021 DJI introduced the DJI Action 2, the next step into the action cams family from the company. The Action 2 is a small modular camera, similar to some GoPro models, that depends on several accessories to do the different things DJI promises it does. Apparently, the Action 2 is going to be a single experience, because with the DJI Osmo Action 3 the company returns to a non-modular solution that’s closer to the original model. The body of the camera may feature a large “Action” word visible, but on the website, the camera is the Osmo Action 3, a return to a non-modular solution.

In fact, as DJI says, the “Osmo Action 3 was designed as a single solution for capturing an active lifestyle, no matter how adventurous. This all starts with a 1770mAh Extreme Battery that lets the camera record for up to 160 minutes. It also handles temperatures as low as -20° C (-4° F), and charges from 0-80% in as little as 18 minutes and 0-100% in 50 minutes, thanks to native fast-charging support, a first for action cameras. The Osmo Action 3 Extreme Battery comes with Osmo Action 3 by default; no separate purchase is required. 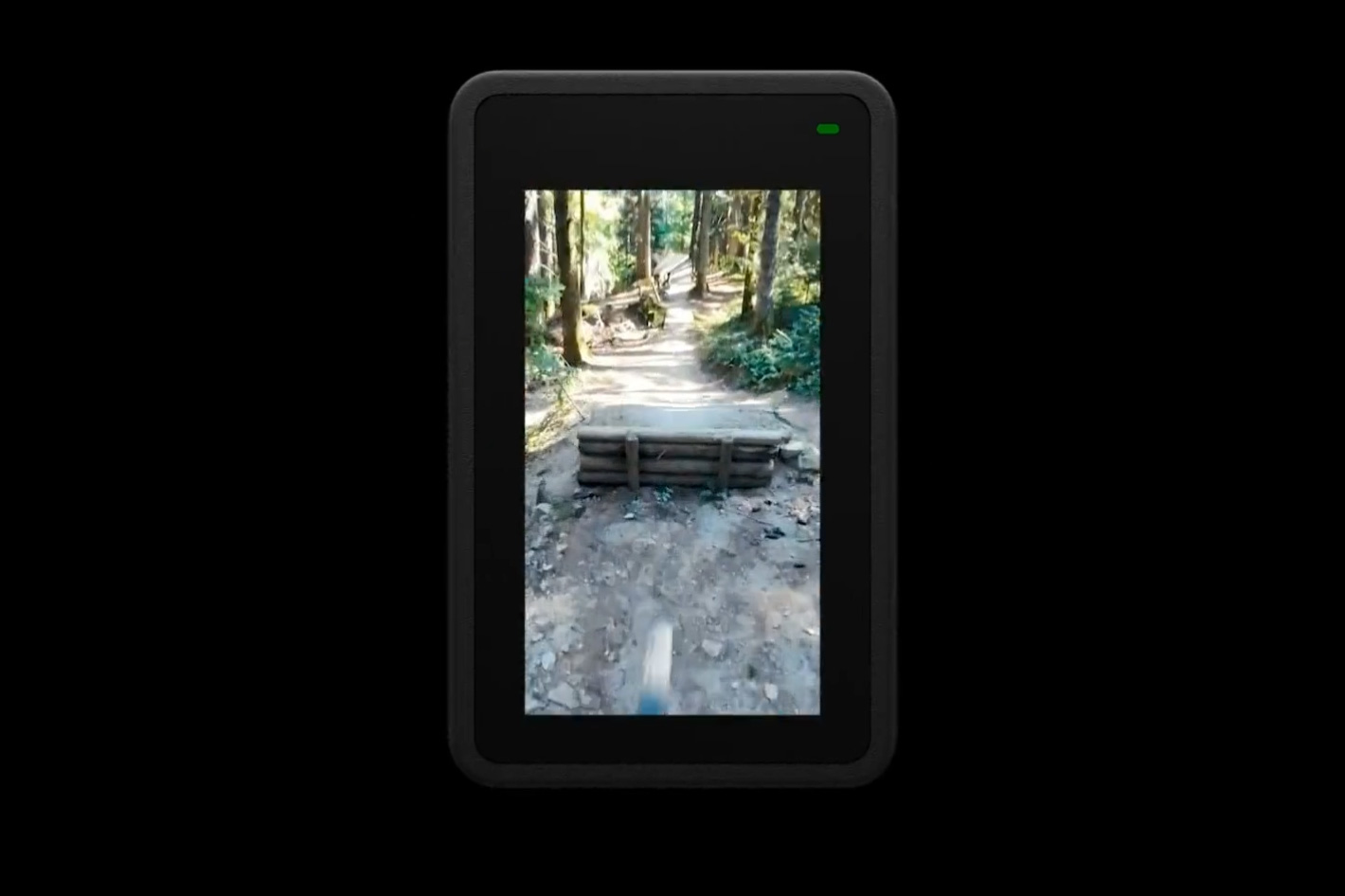 Vertical video with an action cam

Aware of the preferences many have for vertical shooting for social media, DJI decided to offer a vertical-first way to capture compelling action in the Osmo Action 3. The camera has a built-in mounting system that instantly and securely clips the camera to handlebars, helmets, and more, optimizing the quick-release system first seen in Action 2 by adding notches for a locked-in, impact-resistant hold. A new Horizontal-Vertical Protective Frame brings this quick-mounting technology in a vertical orientation, perfect for social media platforms. With a tight, reliable hold that withstands bumps, tumbles, and breaking waves, Osmo Action 3 keeps you and your most extreme moments in a perfect frame.

The Osmo Action 3 is packed with bleeding-edge hardware and software to keep up with your dynamic lifestyle. Its 1/1.7-inch imaging system – similar to the one in the Action 2 – shoots in 4K/120fps, provides a 155° super-wide FOV, and films smooth footage with a world-class EIS suite. An improved heat management system enables continuous 4K/60fps recording until the battery runs out of power, solving the overheating issue common to many other action cameras. D-Cinelike Color Mode is available in video, slow-motion, and timelapse modes for those looking for more room to edit in post-production. And for those willing to dive deeper, Osmo Action 3 is waterproof at depths of up to 16 meters without needing any additional housing. 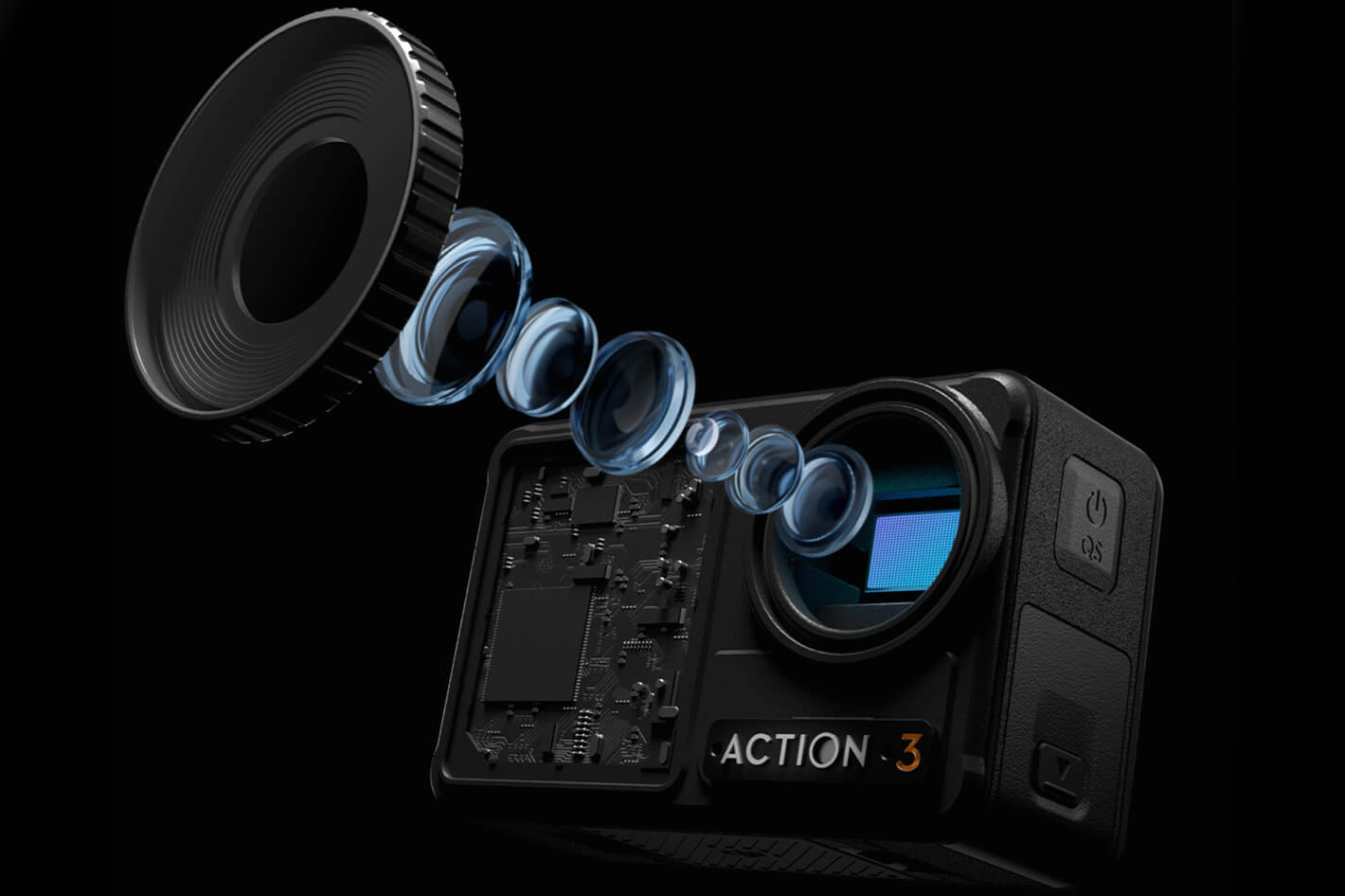 The Osmo Action 3 aims to be more than a rugged action cam. DJI says it is also the perfect camera for vloggers and streamers alike, thanks to its dual touchscreens(first on an action camera), letting users access settings from any angle while keeping the camera in perfect position. Three-mic stereo recording reduces wind noise and boosts the audio quality of the footage. Wi-Fi Livestream supports 1080p/30fps, 720p/30fps and 480p/30fps, and pausing recording during the stream. UAC/UVC Webcam support offers high-quality video and audio for conference calls and livestreams. 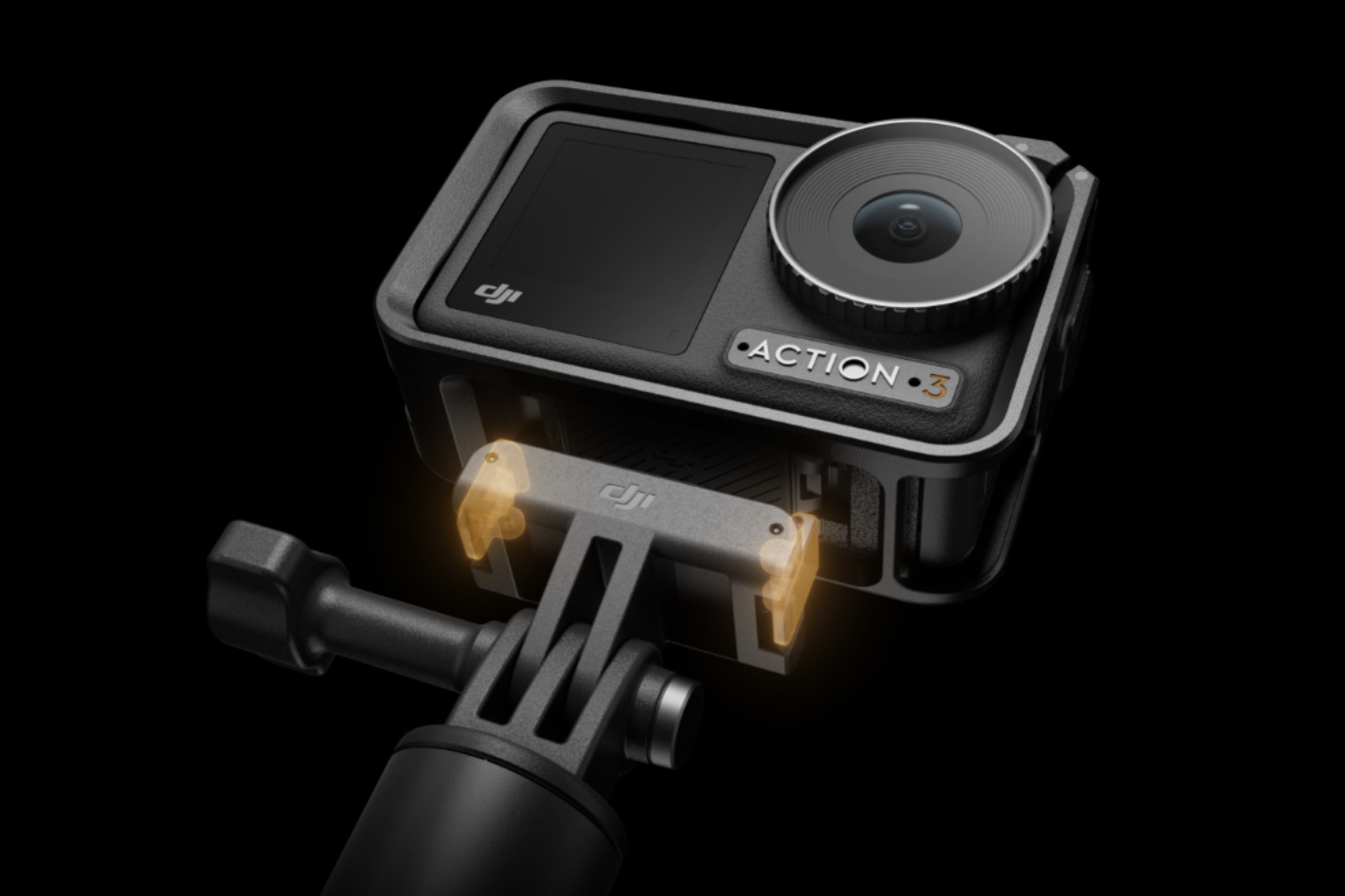 Made to capture anything and everything

Here is some more information shared by DJI about the new Osmo Action 3:

Osmo Action 3 connects with the DJI Mimo smartphone app via Wi-Fi or Bluetooth for even more functionality, including a live feed of the camera, various story templates, quick in-app editing, and more. In addition, the LightCut video editor app is thoroughly optimized for use with Action 3. It can automatically select clips and intelligently match them with exclusive templates to generate ready-to-share video edits.

Expand the Action with Dedicated Accessories

Osmo Action 3 was made to capture anything and everything. For every scenario, a suite of dedicated accessories helps you maximize all the possibilities of this action camera, including: