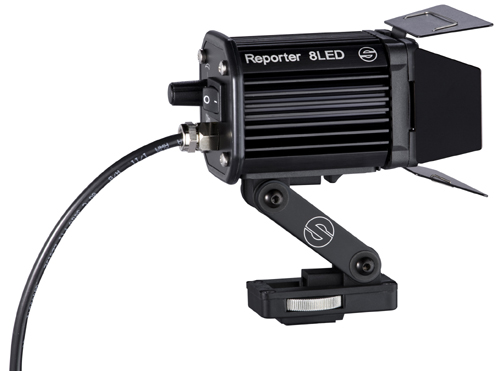 Sachtler, a Vitec Group brand, introduces the Reporter 8LEDim. This new on-camera LED lighting fixture can be dimmed continuously from 100 to 30 percent, to provide just the right amount of light for any shooting situation, particularly for interviews or stand-ups. The robust camera light is equipped with innovative LED technology that not only offers an extremely long bulb life, but also provides significantly higher efficiency than comparable halogen or HMI lights.

The Reporter 8LEDim features an input voltage ranging from 6-24V, which allows it to be powered off the same battery or power supply the camera is using, including Sachtler’s FSB CELL. At just 8W of power consumption, the light can provide 250 lumens of light. The light features a removable 45-degree rotatable 4-leaf barndoor, and a PowerBase connection that makes it easy to change the fixture’s optic sets.
The new Reporter 8LEDim comes standard with a reflector for softening its light, which is particularly important for reporter stand-ups or interview shots. The light is available as a daylight or tungsten version. Daylight and tungsten LED modules can be interchanged in the fixture to provide either 3200?K or 5600?K illumination.

The Reporter 8LEDim’s single LED module design eliminates the multiple shadows that can result from use of multiple LED module lights. A double-jointed bracket for optimal positioning is also included.

The Reporter 8LEDim has a wide range of accessories, including a mini croco clamp and an extension arm. Like its predecessor, the Reporter 8LED, the new dimmable version joins the family of Works with SOOM products, designed to integrate with Sachtler’s SOOM HiPod System, FSB fluid heads, FSB CELL innovative battery concept, and other products. Together, this Works with SOOM system forms a strong team of camera support products for television newsgathering and other run-and-gun productions. Reporter 8LED lights are “Made in Germany”.

The Reporter 8LED was launched at the IBC 2007 and has proven itself in numerous practical applications. To commemorate the introduction of the new Reporter 8LEDim, an on-line raffle is being conducted at www.sachtler.com, where a new Reporter 8LEDim and other attractive prizes are raffled off.