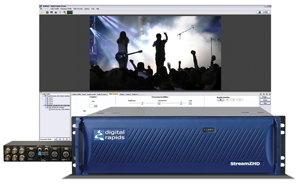 Version 3.7 is the second significant update to the Stream software released in recent months, building on the version 3.6 software update released in August. For users of systems based on the Flux hardware, Stream 3.6 adds AC-3 audio pass-through, enabling AC3-compressed audio inputs to be combined with newly-encoded video without audio re-compression or metadata loss. Flux-based systems also gain the ability to capture raw ancillary data from SDI input sources into GXF, MXF or standalone files.

“Stream 3.7 is the software’s third substantial upgrade this year, encompassing dozens of new features and improvements,” said Darren Gallipeau, Product Manager at Digital Rapids. “StreamZ, StreamZHD and Flux continue to be the most comprehensive and versatile encoding solutions on the market, and the expanded format support and new capabilities in version 3.7 further reinforce their leadership position for high-end, professional encoding applications.”

Digital Rapids provides the leading hardware and software solutions for transforming and delivering media, enabling the multi-platform experiences that are changing how audiences view content. Scaling from standalone appliances to global workflows, Digital Rapids solutions enable media professionals to maximize their productivity, quality, and the value of their content. Recipient of a coveted IBC Innovation Award and four prestigious Frost & Sullivan honors for encoding and transcoding leadership, Digital Rapids combines innovative technology with proven expertise to help our customers to expand their audiences, increase their media revenues and reduce their costs. Digital Rapids Corporation (www.digitalrapids.com) is headquartered in Ontario, Canada with offices in the United States, the UK, Australia, Argentina and Hong Kong.