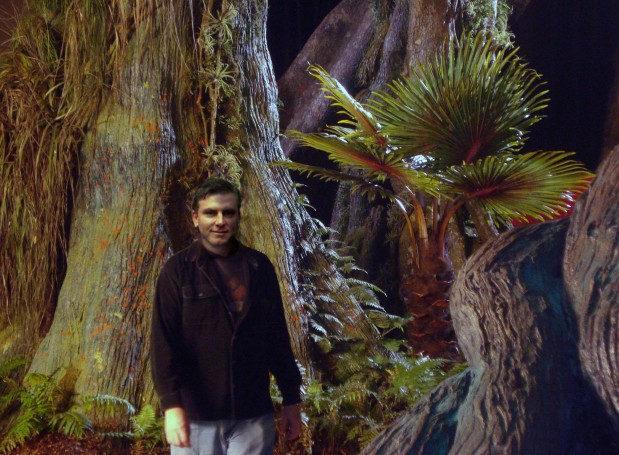 Robert Stromberg in New Zealand in front of a rare physical set piece for “Avatar.”

Robert Stromberg was understandably emotional for a variety of reasons when he won an Academy Award for Art Direction, along with co-production designer Rick Carter and set designer Kim Sinclair, for their work on “Avatar.” He alluded in his acceptance speech to a serious illness several years ago that almost robbed him of the bright future he is now enjoying. Stromberg has chosen not to detail the illness, but surmounting it has permitted him to continue a decidedly unique career path all the way to Oscar glory. And that path started when he was just a youngster. He grew up learning how to do matte paintings from his father’s friend-a young Phil Tippett-while making little films in his garage. He later became a successful matte painter, working with industry notables like Albert Whitlock and Syd Dutton, among others. But eventually, his professional career moved him toward the world of digital effects for features, and he became a visual effects’ supervisor with his own company, called Digital Backlot. Then, in 2004, Stromberg earned an Academy Award nomination in the visual effects’ category (along with three others) as the visual effects’ designer on Peter Weir’s “Master and Commander: The Far Side of the World.” Still, Stromberg says he “never had production design in mind” all those years, while progressing through the visual effects’ world. And, yet, production design is exactly where he now finds himself.

Stromberg was co-production designer, along with Carter, on “Avatar”-a project that first earned them an Excellence in Production Design nomination from the Art Director’s Guild leading up to their Oscar nomination and victory. Following “Avatar,” Tim Burton hired Stromberg to serve as production designer on the visually tripped-out “Alice in Wonderland”-another high-profile, digital design project.

Shortly after his Oscar nomination, I chatted with Stromberg about his unusual transition from visual effects to production design, and how his background helped that transition for design work on state-of-the-art digital stereoscopic projects like “Avatar” and “Alice in Wonderland.” (“Avatar,” as we all know and as I’ve discussed in this column, was shot stereoscopically, while “Alice” was shot 2D with the Genesis camera recording to Codex hard drives, and then put through a conversion process to 3D in post at Sony Pictures Imageworks. The movie also utilized the Dalsa Evolution camera for numerous visual effects plates that required 4k image capture. I am now preparing an article for American Cinematographer magazine about the making of “Alice” and will post a link to that article when it is published.)

Stromberg fell into doing design work on “Avatar” when a friend called him several years ago to say that James Cameron needed some design help to prepare a studio presentation on the film, eight months before it was green-lit. Stromberg stayed up the night before his first meeting with Cameron, creating two digital paintings in Photoshop. These were the first images ever created of the fictional moon called Pandora, where the action takes place in the film. During their subsequent meeting, according to Stromberg, Cameron decided that was exactly the look he had been envisioning, and he hired Stromberg to continue his design work as the project wore on for several years.

“Cut to three and a half years later, and that one night of inspiration turned into a production design career for me,” he says. “I did about a year of design work with several other illustrators that I brought in. That was before the production was green-lit and I still considered myself a visual effects designer at the time. There was a (production designer) at the very beginning (Martin Lang), but once the movie was green-lit, he left the show and I realized the movie was so big we would have to split up the duties. So Rick Carter came on, and he’s gone on to be one of the guiding forces in my production design career. We split up the movie-I took on Pandora and all the organic elements of the planet, and he took on the man-made, live-action stuff, including all the mechanical elements and the physical sets in New Zealand. I found that splitting it up helped the story in the end, because we had two very different perspectives on the story-one gives you the design of the indigenous population on Pandora and where they live, and the other gives you the look of a foreign, alien force (humans who attempt to exploit the moon’s resources). That gave us a visual contrast similar to the story arc.”

What was new and important technologically in the work Stromberg was involved with was the creation of a virtual art department for “Avatar”-a department responsible for making, as he says, “low-res, high-end videogame-quality sets, fairly detailed, but not enough to bog down the system” as Cameron used those sets while shooting actors green-screen in order to see his characters in the virtual world he envisioned.

As Stromberg explains in the audio clip below, the production developed a virtual camera system for this work, which allowed Cameron and his team to move cameras within those virtual sets while recording the actors, and essentially, as he says, “to direct the movie in the virtual world.” And that breakthrough, Stromberg adds, allowed him to art-direct in that same, virtual world. Click below to hear him explain this “Swiss Army Knife” approach for both designing, and directing, in this virtual world. This ability was especially crucial, Stromberg suggests, because, as you will hear below, he could go on “a digital production scout” each day after shooting in order to prepare the nuances of the next day’s virtual set. In other words, “I think this was probably the first time a production designer has been in an artificial, digital world to art direct,” suggests Stromberg, “and that was a thrill.”

(Apologies for the slightly muddied audio on Robert’s end-he was on his cell phone on a long car trip when we chatted recently. His insights, however, make it most definitely worth a listen.)

Much of this virtual camera approach, Stromberg adds, made members of the production feel like they were “on covered wagons heading west.” He credits award-winning visual effects’ guru Robert Legato for designing the original concept years ago during Cameron’s initial R&D phase, and says the technology is now “many levels beyond that.”

That’s a good thing, because much of the concept was also used successfully on “Alice in Wonderland.” Unlike “Avatar,” that production did not have a decade or a $300-million dollar budget to get it right. In fact, it had a very tight shooting schedule. Therefore, Tim Burton opted to shoot his actors, who largely interact with an almost totally digital world for the vast majority of the movie, green-screen with Genesis cameras, and then turn the stereoscopic conversion process over to Imageworks. As a consequence, the only way for him to see his characters in their eventual environment was to get a virtual look using a system similar to what was used on “Avatar.”

“On ‘Avatar,’ we also had developed a system we called ‘Simul-Cam’ that applied more to live-action sets in New Zealand,” Stromberg explains. “If we had a live-action set, and then a partial live-action set, and a green screen component, in that green screen area, we could do a real-time dimensional composite by tracking the camera-tracking a virtual environment to a real environment. That was useful for camera work, because Jim and his actors could see what would be there, and the actors could see what would be there. 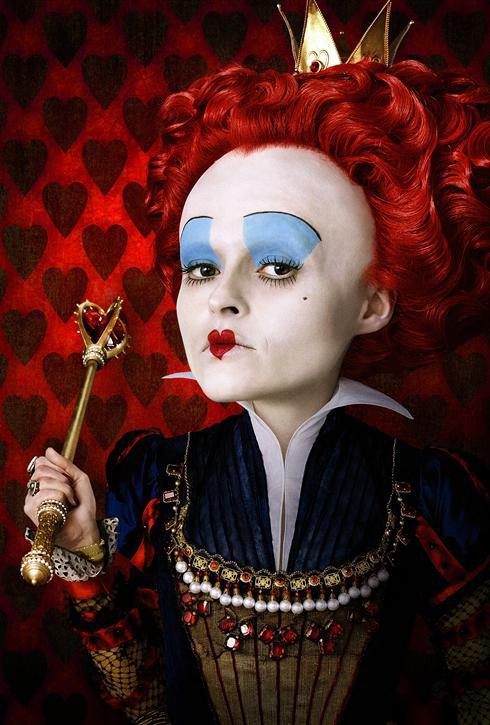 “So that gave us an idea going into ‘Alice,’ ” he adds. “I knew we would primarily have partial sets and a lot of greenscreen. It seemed to me, this would be the best way to show Tim Burton (during shooting) what would fill those large green screens. So, I essentially took all I learned from ‘Avatar’ and applied it to ‘Alice,’ and once again, I had a virtual art department going for this purpose. We built digital representations of all the sets. The only difference was, in ‘Alice,’ we had real actors interacting with sets, so we also built partial (physical) sets, and for every set, we therefore had the ability for actors to touch things and feel things going through doorways and so on. Then, we had the green sets that were going to be replaced by digital sets. So it was a weird hybrid of some of the things we did on ‘Avatar’ combined with some even newer things.

“The point was, I approached ‘Alice’ from a design perspective with the idea of getting Tim Burton as much as possible to view on the stage during filming, to help him know where the actors were in this world we had designed at all times. (Virtual sets) were not all we used-we also had some physical and digital artwork from very talented artists, and some traditional models and miniatures for Tim to walk over and examine. But the virtual sets were a major part of it, and between the virtual and the physical, Tim had three different ways to view what would be in the shot later.”

At the end of the day, laboring as production designer on two state-of-the-art digital productions back-to-back in recent years has made Stromberg something of an expert on the issue of designing digital imagery to be seen on the big screen in stereoscopic glory. In closing out our discussion, he offered up some advice on the issue of designing for stereo, and what the 3D paradigm shift might mean for designers. Click below to hear that advice.