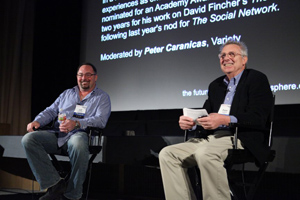 Taking the stage in the Beaudry Theater, Oscar-Nominated Jeff Cronenweth, ASC, opened up to the audience about his experiences as Director of Photography on visually stunning feature films including “The Girl With The Dragon Tattoo,” “The Social Network,” and “Fight Club.” In an engaging conversation moderated by Peter Caranicas, Deputy Editor for Variety, Cronenweth shared his point of view as one of today’s leading visual storytellers, a talented artist who blends technology and creativity to produce amazing images. With a career that also includes over 500 music videos, from Celine Dion to Nine Inch Nails, and top rated commercials in addition to major motion pictures, Cronenweth dug into the how and why behind the scenes in his career. The Keynote was followed with an extended Q&A with the DP. 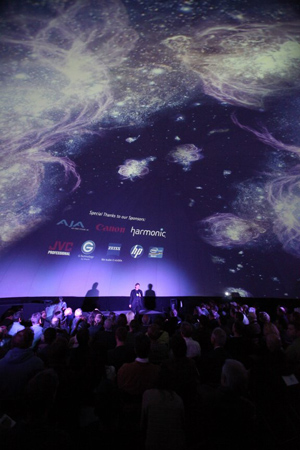 Creative visionary and technologist Ed Lantz, founder of Vortex Immersion Media and recognized transmedia, fulldome and digital media expert, delivered an eye-popping keynote to a standing-room only audience in the Vortex Dome. Vortex creates immersive entertainment venues in spots around the globe as well as a number of related products and services that serve a growing immersive entertainment community. Recently, Vortex built an immersive dome theater for Super Bowl XLVI and a number of other marquee clients. The Vortex Dome is an R&D development site for Vortex, semi-permanently in place at LA Center Studios. During the presentation, Lantz focused on the growing role that immersive entertainment will play in the future for studios, networks, venues, and content creators across the spectrum, and was followed with presentations of real-world immersive projects.

Increasingly, Createasphere’s Entertainment Technology Expos are seen as a go-to venue for the announcement and first-looks at new products from leading manufacturers. HP Workstations and Intel made their Hollywood debut during a hands-on intensive with its groundbreaking HP Z1 Workstation.

Canon presented the first public screening of “When You Find Me,” a 25 minute short – produced by Ron Howard, directed by Bryce Dallas Howard (“The Help,” “The Twilight Saga – Eclipse”) – shot in 2K. Following the screening, cinematographers Andre Lascaris and Bruce Dorn (who screened his film, “Playing with Fire”) joined Canon’s Tim Smith in demonstration and exploration of the C300.

Upcoming for Createasphere in 2012 is a broad spectrum of in-person events, education, and online engagement including its community news portals; ProVideo Coalition and DAMCoalition; the DAMMY Awards, Digital Asset Management Conference in New York and The Hague; Executive Marketplace in Chicago and Los Angeles; Post Production Master Classes in New York and Los Angeles; and the Entertainment Technology Expos in Los Angeles. The next Entertainment Technology Expo is set for November 7th and 8th, 2012 at the Burbank Marriott.

For further information about Createasphere offerings and events, please visit www.createasphere.com, or call 818.842.6611.

Createasphere was founded in 2001, and over the past decade has grown into a global company that in 2011 produced seventeen events over three continents as well as five websites. Createasphere became part of Diversified Business Communications in 2008, and now drives their entertainment, media, technology strategies and properties division. Currently, Createasphere produces the Entertainment Technology Expos in Los Angeles; the Digital Asset Management Conference in New York, Los Angeles, and Europe; The DAMMY Awards in New York; the Executive Marketplaces for Houses of
Worship in Los Angeles and Chicago; Post Production Master Classes in New York and Los Angeles, and the online news and content portals ProVideoCoalition.com and DamCoalition.com.