I shot the X Games for the 12th time. It’s good to have an idea of what to expect, but there are always surprises. 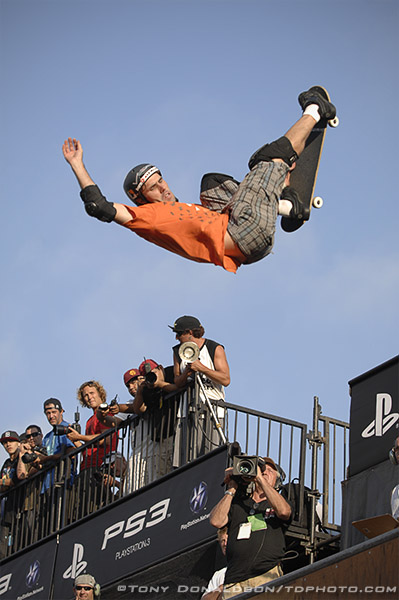 This year was X Games 15. I’ve been fortunate enough to cover a dozen of them, starting with the second year. I was recounting this with Chris Stiepock, Vice President & General Manager of the X Games. I’ve known Chris all that time, since it was called the Extreme Games and had “sports” like bungee jumping and sky surfing. The latter was people skydiving with special snowboard-type apparatus that allowed for some crazy aerobatic maneuvers.

Those first years I was shooting for a variety of magazines, and worked with Chris to get media photographers better places to shoot the action. Originally we weren’t allowed on the decks of the ramps, even during practice. And most of the photographer areas were shooting into the sun and right next to the crowds of fans, so we had bad light and backgrounds that looked like there was nobody else there. The events originally lasted ten days, the events were really spread out.

Flash forward to today: The event is four days long, slamming all the practices, elimination rounds and finals into 40% of the time. Same number of sports, though they do change. Photographers have much better access, though still limited during finals which are televised. TV always gets precedence. I don’t shoot X Games directly for magazines, other than the occasional NY Times assignment, instead working for ESPN’s marketing department. I love that group, all incredible people. Also gets me better access most of the time, including field-of-play during televised finals.

The only two sports left that were in the original event are BMX and Skateboarding. Four athletes have been at all 15 games: Andy MacDonald, Rune Glifberg and Bob Burnquist in Skateboarding and Dennis McCoy in BMX. Had a great time reminiscing about that and some other old shoots with DMC while he was getting ready for BMX Vert.

The event is split between two venues the first two days. Staples Center in downtown Los Angeles, and Home Depot Center at Cal State Dominguez Hills in Carson, California. They’re both in L.A., but far enough apart it’s really hard to cover both places. You have to prioritize.

I stayed at Home Depot Center all four days, catching the heart of almost all the events. I had my trusty assistant Kelvin with me helping me schlep gear and light portraits. He was helping me last year when it was about 20 degrees hotter. We witnessed a couple of people passing out from the heat, a reminder to drink plenty of water. When there was a break, Kel ran off to get us water, which is another huge help.

There are hundreds of other photographers there, so everyone is trying to shoot around everyone else. It helps when the people around you are fellow professionals, acting as such. At these events, there are punks who consider themselves and the blog they’re shooting for more important than anyone else, which almost always causes friction. Some people just don’t consider that we’re all there to do a job. And when shooting awards, like everything else here ESPN television cameras have precedence over everyone else. The camera pointers will tell you about it in no uncertain terms. Had one cable wrangler get bumped by Kelvin, Kel apologized and the cable wrangler actually said “No worries, you’re just trying to do your job!” I almost fell over. That’s the classiest cable wrangler who ever lived, he’s really an anomoly. Hope that’s contagious, we’d all get along better. In general it’s nastiest to deal with other photographers at awards in Skateboarding and Freestyle Motocross (Moto-X). Those guys seem to have the biggest sense of entitlement (see above) and lack of professionalism. I’m generalizing here, not all of them are like that at all.

The people I work with for ESPN have a sport-specific photographer for every sport, then two generalists. Myself and Eric Bakke. We cover a little of everything, including really mundane stuff like X Fest events (the interactive village where vendors have booths and fans can get free stuff), awards and often signage. It’s part of the job.

The media has some nice catered food, but the ESPN staff has it even better. When Kel discovered this, he’d have second helpings every day. He’d have probably had more if I wouldn’t have decided to get back to work. ESPN knows what I do as well – a happily fed crew works harder and longer. I always have good food on my shoots, too.

When we first arrived this year, we had to walk all the way around the venue with our gear, thanks to misinformation. The security is ALWAYS misinformed. One person will tell you one thing, and the one ten feet away will tell you the opposite. I really wish ESPN and the venue staff would work all this information out! Picked up our credentials, which should have included field-of-play access. They didn’t. It takes a lot of time to contact the right person and rectify that. After all these years, even when I’m working FOR the company, these little hiccups are annoying. Unfortunately I had other shoots this week, otherwise I’d have come down the day before to get our credentials. 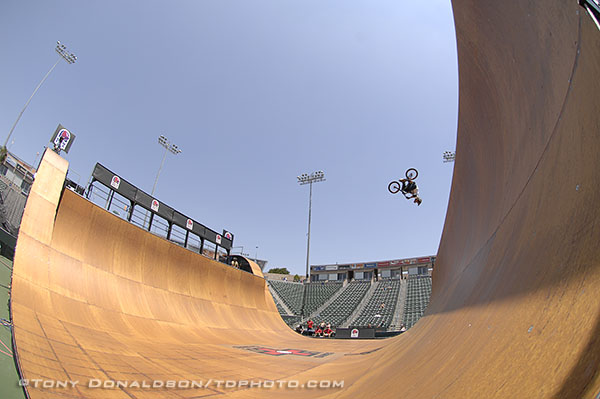 Dennis McCoy, aka DMC, floats a “Flair” (back flip with a half-twist) over the halfpipe in BMX Freestyle practice. 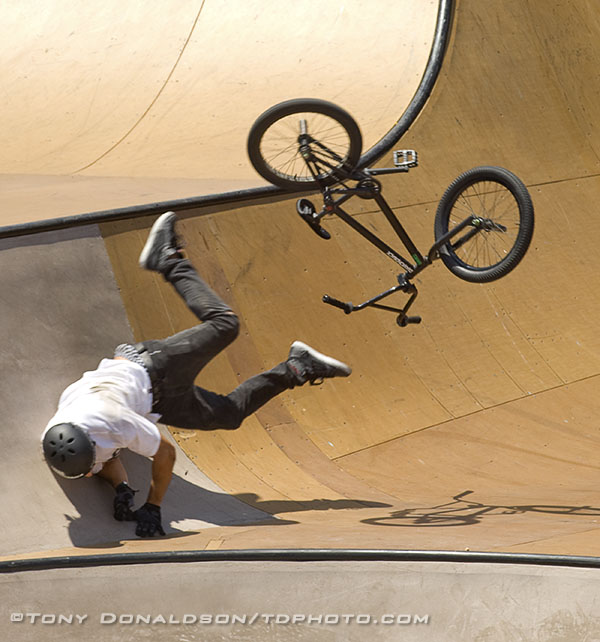 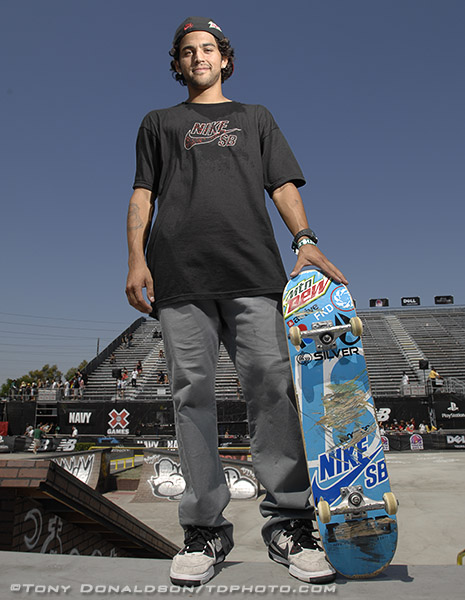 In addition to action shots, I was continuing my quest to get quickie environmental portraits of the athletes. Here’s Paul Rodriguez, yes, son of THAT Paul Rodriguez. Gold medal in street, again. Really nice guy, like his dad. 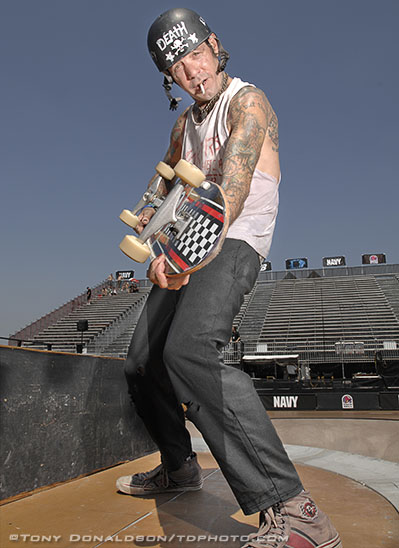 A blast from the past. Some of the guys I used to love when I was a kid had a competition here, the Skateboard Park Legends. This guy had more character than anyone: 48-year-old Duane Peters. He actually did the charleston while I was shooting him. Gotta love it! 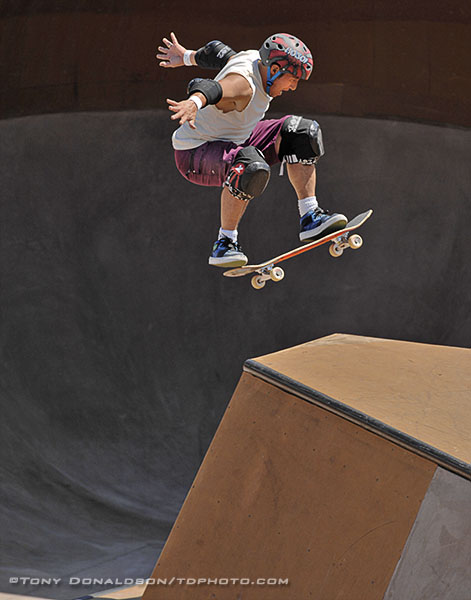 Christian Hosoi, another legend, showing he’s still got it! 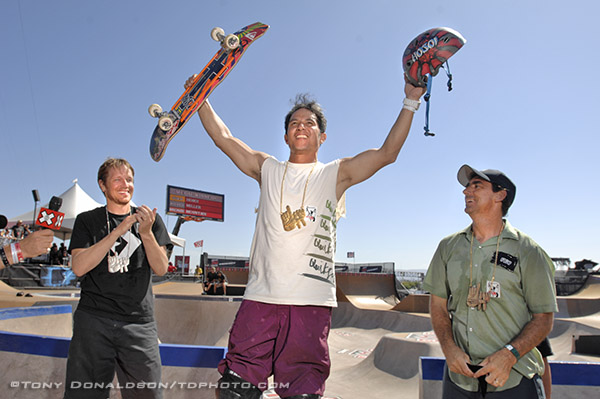 Not only does Hosoi still have it, he has enough of it to win the gold medal. Here he is flanked by fellow legends Chris Miller and Lance Mountain. 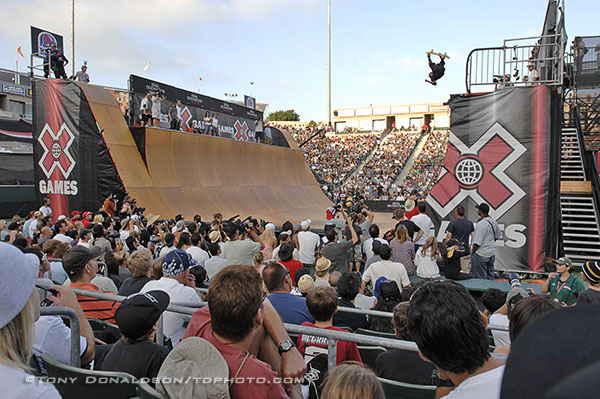 I love stepping back and getting images that get a feel for the event. The tennis stadium-turned-halfpipe stadium was packed for BMX and Skateboard Vert finals. 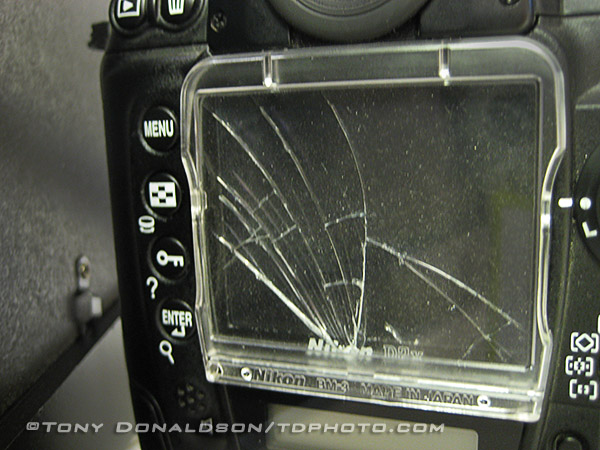 Hazard of the job. I wish I could say it happened from something glamorous, like getting hit by a flying bike or almost run over by Dave Mirra and his rally car, but alas, it was something stupid. I hooked the strap on a bench it had been sitting on, it fell a foot onto the bench and cracked the glass UNDERNEATH the plastic cover. 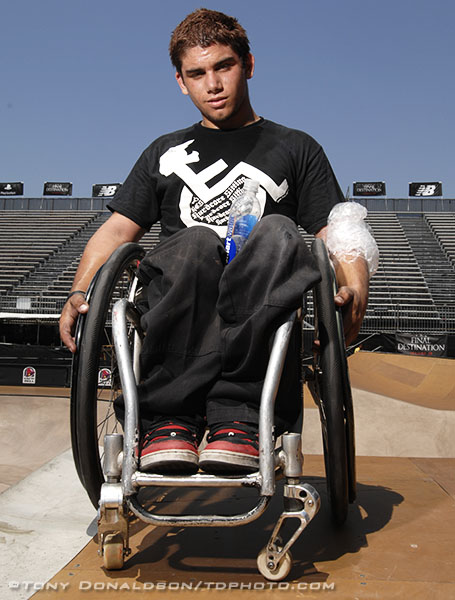 A brand new competition was included this year. Adaptive Park. People with various handicaps, from artificial legs to this guy – Aaron “Wheels” Fotheringham. If you didn’t notice the missing limbs, these kids look like top amateur skaters, nailing some really exciting runs on the Park course. I shot action and portraits of many of these guys. 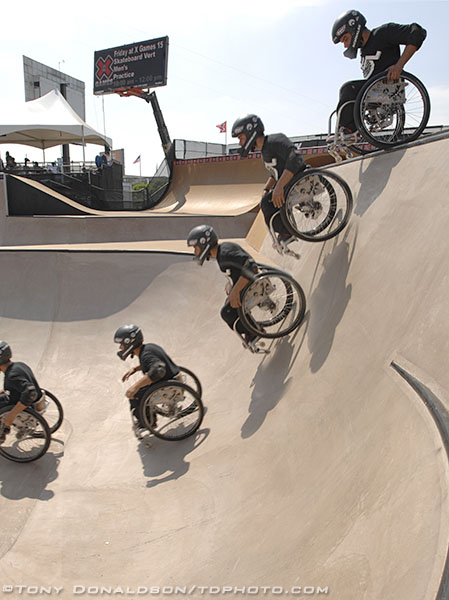 Composited sequence of Aaron “Wheels” Fotheringham dropping in on about a 13-foot, nearly pure vertical drop. He can do backflips, too!


Images will be available for licensing via iconsportsmedia.com.

If you ever get a chance to cover the X Games, by all means do it! You won’t find a more impressive gathering of insane athletes anywhere else. Apply early for a credential, they have something like 700 media credentials and 2000 applicants every year. It’s first come, first served. For media, you’re restricted to only using the images for the media outlet you cover it for. I think they worry most about commercial uses, because they can cause problems and lost income for the athletes. But whether you go as a photographer or just a spectator or fan, this is THE event for these sports, and it’s incredible!