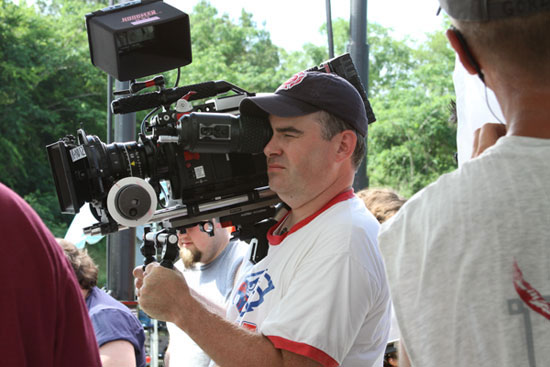 The first part of this article dealt with the capture, transcode, preparation and off-line edit of the feature film, “Courageous,” for which I was one of three editors. In this article I’ll discuss the on-line process which primarily took place at PostWorks New York.

At first there was some discussion that the film would actually be finished using the ProRes 444 HQ files that had originally been generated on set from the RED R3D files, but discussions with colorist Scot Olive and Director of Photography, Bob Scott and director, Alex Kendrick led to the obviously preferable decision to re-conform the edit back to the R3D files. 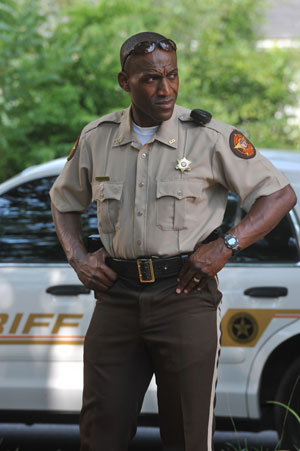 With that decision made, the first question was how to get the files to PostWorks in NY. With limited time to deliver, Post Supervisor Clarke Gallivan enlisted a Production Assistant to actually drive back to Albany, Georgia and load the RAID with the R3D footage into the back seat of his car and drive it to GroundZero Post in Nashville. At Groundzero, they used the Final Cut Pro sequence file to determine all of the R3D files that would be necessary to complete the on-line. They made copies of just those files from camera start to camera stop, and delivered them, along with some other ProRes materials, on a separate drive, back to PostWorks.

Most of the footage in the movie was sourced from R3D 4K files, but some special effects shots, including many in the big shootout at the end of the movie, and some car-mounted and hand-held Canon 5D Mark II footage, were only delivered as ProRes.

I actually shot two pickup shots in the movie with my personal 5D Mark II. One is a shot of a pickup truck driving to one of the central scenes in the movie at a bank. The other shot was one that we realized in the edit that had been missed. It was a close-up of a water bottle being tossed into a garbage can. Not glamorous, but it’s kind of fun for me to know that the same camera I use on a daily basis to shoot my kids’ baseball and soccer games was used to shoot scenes for a feature film! I believe that I used the Marvel’s Cine picture style to give a neutral look for grading. I also have Steve Shaw’s gamma looks for my 5D, but I didn’t have them installed at the time. 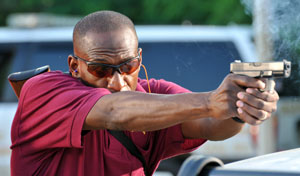 According to Gallivan, some of the 5D shots were problematic. In one of the opening chase scenes, the 5Ds were used to supplement the footage from the RED. One scene in particular showed a white building with clapboard siding in the background that had severe moire on it in the background. After several attempts to fix the moir©, colorist Scott Olive ended up blowing out the highlights on the white building to mediate the effects of the 5D.

With the select R3D scene pulls delivered to PostWorks, editor Melissa Mason created an AAF file of the sequence using Final Cut Pro 7 and Automatic Duck to get the sequence to PostWorks’ Quantel iQ edit system. According to on-line editor Bunce, from there it was actually pretty straightforward. The AAF sequence simply finds the proper R3D files and points to them on the media storage array. Bunce then checked the conformed R3D files against the ProRes version of the cut to make sure every shot and every edit point was identical. 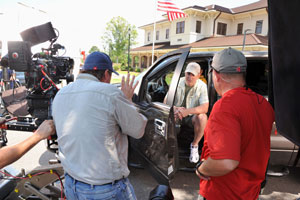 The great thing that Bunce likes about the shared system between his iQ and the colorist’s Quantel Pablo system is that the R3D files are always “live” between the two systems, so the colorist has access to all of the bit depth and “RAW” qualities of the R3D files. 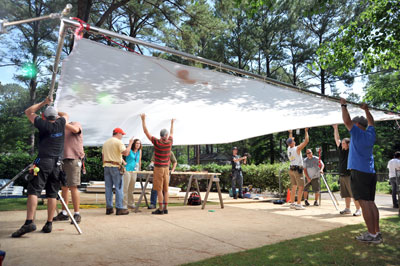 The way that the hand-off between Bunce’s iQ and Olive’s Pable is easy, according to Bunce. The iQ saves the conformed timeline, which is flagged in the clip library, and it is entered into the “gene pool” which allows Olive to see the sequence in the Pablo. The “gene pool” is really just a shared folder. In the Pogle days, this file used to be known, ominously, as “the black hole.”

The color correction process was a collaborative one, with director Alex Kendrick, D.P. Bob Scott, and colorist Scot Olive having worked on two previous pictures together. They experimented with several different looks.

Post supervisor, Gallivan, praised the ease of working with colorist on the Pablo. “It was a distinctly different process working in Pablo doing non-linear color correction. The options and ability to move around is awesome and instant. You have so many options. Alex was really able to explore the look of the film. He tried a lot of different looks. At one point he really pushed it towards a distinct look. Then he pulled it back to a more natural look. “ 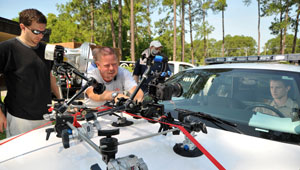 According to Gallivan, the initial color correction of the film, done in December of 2010, took about a week, with a goal of completing one reel per day for the seven reels of the film (approximately 2 hours). There was a second color correction pass for the video deliverables that took about half that time.

With the color correction done, on-line editor, Bunce, could then bring that back in to his system for last minute fixes, such as the addition of a small number of on-screen graphics and minor edit tweaks.

Deliverables on a feature film are time consuming, absolutely critical and completely thankless. On-line editor, Bunce, was very impressed with the attention to detail and specific requests made in generating the deliverables. According to Bunce, many producers waste a lot of money by not having a clear, overall picture of their deliverable needs, but Gallivan was “very buttoned down. You had a great road map because she knew what she was doing.” 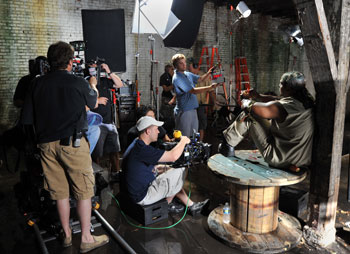 The main deliverable, since this feature hit more than 1,200 theaters in the US, plus expects a wide international release, was a filmout. The filmout was done on PostWorks Arrilaser. Because they have their own filmout capabilities and lab, Postworks’ LUTs for matching the look of print film stocks as the colorist grades on monitors needs very little tweaking, according to Gallivan. The LUTs were generated by the TrueLight system. Once the grade was done for the filmout, then they turned their attention to the REC 709 deliverables. There are also deliverables for DCP files for the theaters with digital projection.

One of the most painful deliverables for Gallivan and director, Alex Kendrick was the pan and scan version. The movie was framed for 2.35 aspect ratio, and cropping to 4:3 involved some difficult artistic compromises. Movies shown on airplanes and cruise ships still regularly request this aspect ratio for movies shown in those venues.

I was privileged to be flown in with the rest of the cast and crew to the premiere at the Fox Theater in Atlanta, where “Gone With the Wind” also premiered. It is a beautifully restored “movie palace” complete with an organist and animated clouds and stars on the ceiling. It was a great place to see all of the hard work of so many people come together.