Los Angeles lensmen Ryan Avery (formerly with Schneider Optics) and Jim Zhang (a behind-the-scenes designer for the likes of Century Optics, Chrosziel, and 16×9) have teamed up to build the “Veydra” line of Micro 4/3 Cinema Lenses. 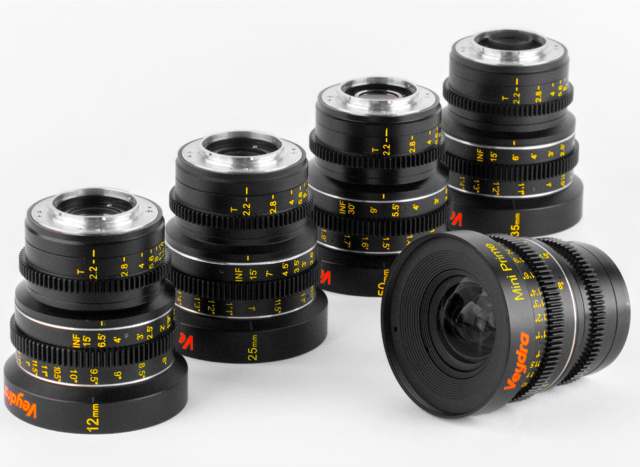 Ryan kept seeing small cameras like the BMPCC and the GH-series Panasonics mated to comparatively huge cine lenses via adapters, and felt that there had to be a better way. 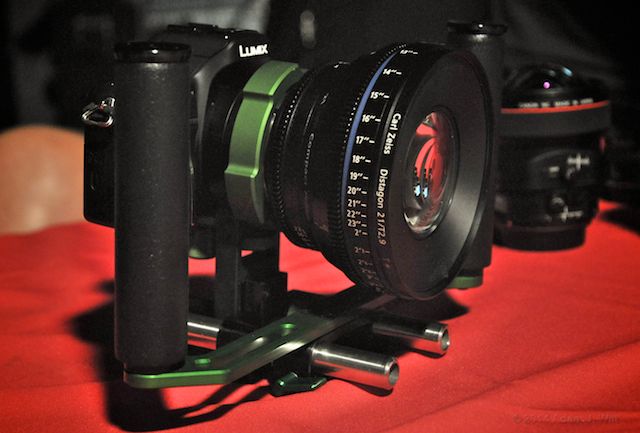 A GH1 with a Zeiss Compact Prime on a Hot Rod Cameras adapter rig in 2009.

He talked to Jim, whom he's known for a long time, and a year ago they set out to buiild a set of cine primes specifically for Micro 4/3 cameras. Cine lenses for Micro 4/3 need not cover as large an image area as lenses awkwardly adapted from the Super35mm or full-frame worlds, so the purpose-built lenses can be smaller, lighter, more compact… and less expensive. Just as importantly, they're sized appropriately for the cameras they'll be mounted on, so the camera package remains a balanced blend of body and lens: better for workflow, and less conspicuous when the crew is trying to maintain a low profile (not that anyone reading this would ever try to shoot without a permit, mind you).

The lenses are being built by Zhang Optics in Shanghai, with final touches and packaging done in Los Angeles. The designs are those of conventional cine lenses: aluminum bodies; hard chrome-plated brass mounts; all-mechanical, helical focusing with a 300-degree throw. Think Ultra Primes more than Rokinons or Canon L-series glass.

Spherical optics throughout (which bodes well for better bokeh, all else being equal), with careful multicoating to reduce flare and improve transmission (no word yet on whether Veydra will ever offer uncoated versions for more flare-prone “character”!).

The lenses can be adjusted for flange-depth differences (e.g., back-focus) by loosening a screw on the focus ring and repositioning it so that the witness marks line up perfectly for your camera – no shimming needed.

Prices for individual lenses will range from $900 to $1200, with deliveries commencing end of January 2015 for the 16mm, 25mm, 35mm, and 50mm lenses, and end of June for the 12mm. Veydra has a Kickstarter project offering discounted single lenses and lens sets at various pledge levels; it's likely that various LA lens vendors will also have package deals in the weeks to come.

As for hands-on tests, Art Adams and I are due to receive a set of Veydras for review in the next week or two; I'll post a note when we have something to show. In the meantime, Hollywood denizen Jared Abrams is already shooting some tests and posting stills and clips. Enjoy!